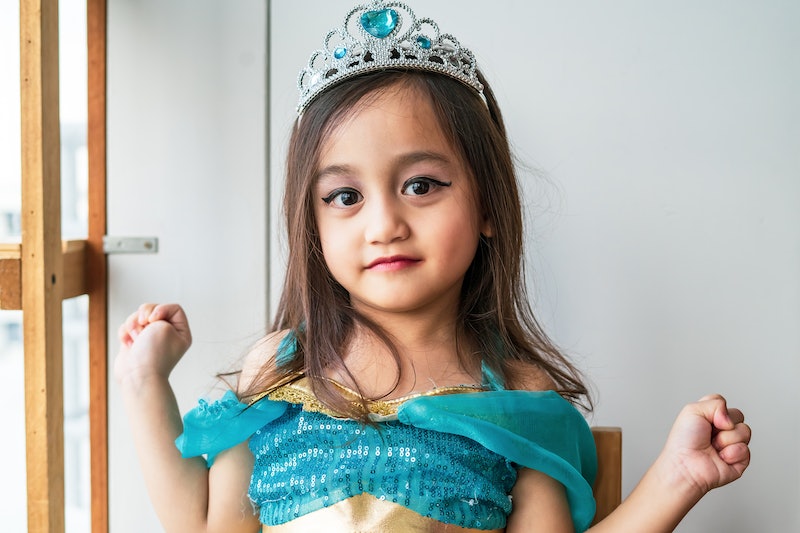 Walk into any children's store, and cartoon princesses dominate aisles — ladies with lush tiara-crowned hair and enormous eyes adorn lunch boxes, backpacks, clothing, and toothbrushes. Their proliferation leaves few alternatives, says mother Beckie Thompson, creator of the I Don't Want To Be A Princess Project; and she is not alone in her quest to combat the princess craze.

The I Don't Want To Be A Princess website, which was launched April 12, highlights stories of inspiring women from history as well as extraordinary modern-day ladies who are making waves in business, entertainment, and sports. The site "encourages girls and women to look past what they're constantly told to be and, instead, to look within themselves for what they want to be," Thompson tells Bustle.

They also sell T-shirts with empowering adjectives emblazoned across the chest such as "Fierce" and "Confident" — the words tossing off a cartoon crown. Thompson believes that the language we use to compliment girls can significantly shape their future goals and habits, saying, "Our website, social media and products were created to start a movement of how powerful it would be to call girls words other than 'princess' and what they'd believe they could accomplish if that happened."

This overuse of the oh-so-regal moniker was the inspiration for the project five years ago. On a family vacation, Thompson's then four-year-old daughter Keira was frequently referred to as "princess" by strangers. As the story goes, frustration mounted until one day she turned to her mother and said "Mommy, this is so annoying. I don’t want to be a princess; I want to be a pilot." Indeed, "princess" has become such a popular term of endearment that most people don't think about its problematic underpinning.

There are many mothers calling for the end of the defaulting to princess-ness. As Kristi Blust writes in her essay "Don't Call My Daughter A Princess" for Working Moms Against Guilt, "While being a princess sounds wonderful (beautiful, well cared for, and 'saved' in sticky situations), it is not realistic. For most of us, the universe does not provide, on a continual basis, lavish gifts, attention, and assistance in times of need." Teaching self-reliance is much more important so that girls can focus on their inner strength and unique qualities. Thompson tells Bustle that, "We call girls “princess” based on their appearance. I’d like for us to call girls other words based on their abilities. The main point is that a princess is not really a career to which one can aspire."

The profitable princess franchises rose to power in the 1930s and reached a new level of popularity in 2013 with the introduction of the notoriously chilly heroine that encouraged people of all ages to "Let It Go." And for nearly as long girls have emulated and idolized these popular heroines. But by removing princess from the lexicon, are we taking away an element of fantasy and sense of wonder, which is key to expanding imagination? Is it possible for the princess and the professional co-exist peacefully?

Of course, we need to be aware of our gendered speech patterns — making sure we use strong adjectives with girls instead of complimenting their looks, “sweetness,” or “poise.” Growing up, I too received those classically "feminine" compliments while my brother was "strong" and "smart." But are princess to blame? I loved the princess canon, wore tutus, and dreamt that a handsome princess would one day give me my first kiss.

Did I really think that one day I would marry a prince? No. Did I fantasize about wearing beautiful dresses to lavish balls? Hell yes. I still do. I wish I could afford one of those dresses, but just like in the fairy tales I would need a fairy godmother, some creative mice, or a hunk of lottery winnings to have that kind of royal cash at the moment. As a self-reliant person, I know I have to continue to work hard and strive to meet my goals. I do not expect a handsome prince to step in and fix financial problems. Today, I prize being part of an equal household with a balanced power-dynamic. I believe other young girls will come to realize this as well.

We face enough harsh realities every day as adult women. I want girls to keep their fantasies. It's true that for most of us being a princess is not a real job. It is something attained by birth or marriage and thus, not something one should aspire to. Dreaming about being a princess is about as profitable as dreaming about being a famous movie star. But will watching princess cartoons really teach young girls a learned helplessness? Most of the popular princesses have incredible wells of strength and perseverance, not to mention catchy songs that kick butt. If we cannot fantasize about having anthropomorphic animal friends, what can we dream about?

Choosing to fight against the princess craze should not be about limiting options for girls, but rather expanding them. Thompson is providing alternative platforms for girls who have a range of dreams. "By no means am I criticizing girls who want to be princesses. Rather, as the mom of a girl who didn't want to be a princess, I found few alternatives existed," Thompson wrote to Bustle. "I want to give all girls the confidence to be who they want to be."

More like this
11 Trends From The ‘90s That Made You Feel So Cool
By Julie Sprankles
Remember These Ancient Pieces Of '90s Tech?
By Lucia Peters and Emma Carey
Starbucks’ Chocolate Cream Cold Brew Tastes Like This Retro Candy
By Emma Garza
10 Nail Trends That Perfectly Capture The Early 2000s
By Paris Giles
Get Even More From Bustle — Sign Up For The Newsletter