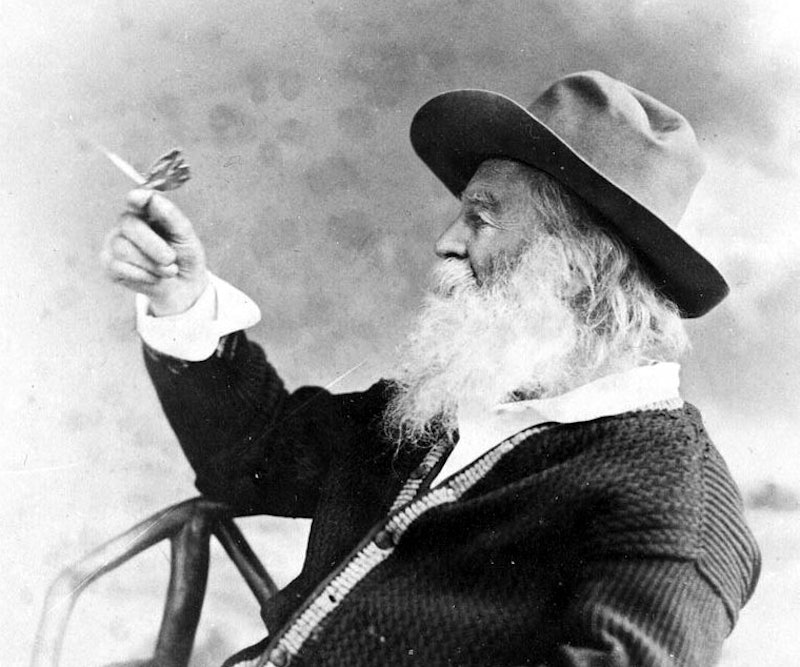 It's hard to pick a more quintessentially American poet than Walt Whitman, and sure enough Whitman's recently rediscovered advice book for American men includes plenty of advice that would be right at home in the 21st century U.S. of A. Which probably says something about the way we approach masculinity in America. Other passages, though...aren't so expected. But then Walt Whitman was always a little off-beat.

Whitman wrote "Manly Health and Training," a 47,000 word treatise published as a series in 13 parts, under the pseudonym Mose Velsor, but despite this, identifying him as the real author was a straightforward thing for researchers. "Besides it being signed with this pseudonym of his ... there was also draft language in his handwriting that matches the piece itself," doctoral candidate Zachary Turpin, who uncovered the manuscript, told NPR.

And thus a new Whitman manuscript was discovered.

So what advice does Whitman have to manly men? Well, to the surprise of no one who has ever seen a picture of the man, he was a big fan of beards, calling them essential "purposes of health." He'd probably fit in at just about any hipster bar, basically.

And there are lots of other tidbits that, with a little modern rewording, would be right at home in the pages of a modern men's magazine — or even satirizing modern ideas about manliness because they're so over the top. Except, of course, Whitman was being completely serious.

“Readers should prepare to encounter a more-than-typically self-contradictory Whitman," Turpin told The Guardian. "[His] primary claims tilt from visionary to reactionary, commonsensical to nonsensical, egalitarian to racist, pacific to bloodthirsty – and back again."

Here are six pieces of advice Whitman had for men in the nineteenth century.

Whitman was a big fan of exercise apparently, and wanted other American men to be similarly enthusiastic. In fact, he felt like the men of America were in serious need of a workout. "America has mentality enough, but needs a far nobler physique," he explained. He recommends things like rowing and hurling as suitably manly activities.

While some might tell you that "real" men eat meat and potatoes, Whitman would tell you to ditch the potatoes. In fact, potatoes are one of many foods he specifically recommends men avoid, including butter, pepper, oil, lobster chicken salad, cabbage, and cucumbers. But really, Whitman just seems to want men to eat nothing but meat.

He writes, "If you want to know what is best to a hearty man, who takes plenty of exercise and fresh air, and don't want any pimples on his face or body, we will answer, (perhaps very much to your astonishment,) a simple diet of rare-cooked beef, seasoned with a little salt, and accompanied with stale bread or sea-biscuit."

It's like some sort of satire of the advice for men — Manly men don't need nutrition! Manly men eat nothing but meat! — but apparently Whitman was actually serious.

Apparently, “A man that exhausts himself continually among women is not fit to be, and cannot be, the father of sound and manly children,” according to Whitman. “They will be puny and scrofulous – a torment to themselves and to those who have the charge of them.”

According to Whitman, the only way to truly be comfortable in shoes or boots is to have them custom made. Of course, mass-produced clothes have come a long way since Whitman's time, so this one might just not be applicable anymore. Especially since custom clothes — like everything else that shows you care about fashion — no longer quite fits with modern ideas of manliness.

Dancing Is your Friend

Whitman likes dancing quite a lot. He writes:

We recommend dancing, as worthy of attention, in a different manner from what use is generally made of that amusement; namely, as capable of being made a great help to develop the flexibility and strength of the hips, knees, muscles of the calf, ankles, and feet. Dancing, on true principles, would have ultimate reference to that, and would then, as an inevitable result, bring grace of movement along with it.

Try to remember that next time you're at the club.

Let No One Threaten Your Masculinity

In another move that seems almost satirical to modern readers, Whitman openly expounds on the importance of not letting anyone threaten your manliness. “Guard your manly power, your health and strength, from all hurts and violations,” Whitman writes. “This is the most sacred charge you will ever have in your keeping." If it were written in 2016, people would doubtlessly tack on a #MasculinitySoFragile when sharing the article.

And really, it's fascinating to see the many ways in which Whitman's ideas about masculinity match up so well with our own. Society still sends many of these same messages to men and boys — that they must be strong and physical and focus only on fellow men and that they must guard their masculinity carefully. Whitman is just willing to be a lot more explicit about it.

But overall, it's a little depressing that our social construction of gender roles and masculinity haven't shifted all that much since Whitman was writing this series in the 1850s. But hey, we've at least added potatoes to the category of manly food, so many men's options for self-expression are opening up a little?

We'll work on it.

More like this
Viserys’ Fate On 'House Of The Dragon' Could Differ From The Book In This Surprising Way
By Grace Wehniainen
21 Signs You're Not In Love Anymore
By Sara Altschule, Kathleen Ferraro and Carolyn Steber
10 Ways To Be More Empathetic To Your Partner
By Raven Ishak and Lexi Inks
Are Quality Time & Gift-Receiving Love Languages Compatible?
By Lexi Inks
Get Even More From Bustle — Sign Up For The Newsletter