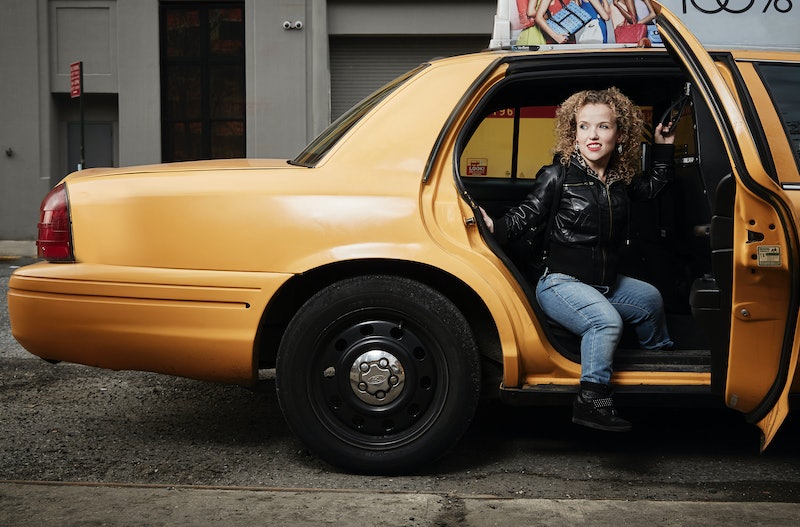 Any new season of a TV show is bound to bring a new cast of characters, and reality television is no exception. So I wasn't really surprised to see that a few of Little Women: NY 's Season 1 cast members won't be returning for Season 2, which premieres on Wednesday, May 4 at 10 p.m. ET. But of course I'm going to wonder why certain cast members aren't returning to the show and what they're doing with their time instead. I'm especially curious to find out what Jordanna James is doing now.

In case you need a refresher, Jordanna was young, spunky, and ambitious on Season 1 of Little Women: NY. We saw her experience the high of starring in a Broadway show, the 2014 revival of Side Show, and the low of having it close. She also found herself in a bit of drama with her castmates, whether it was receiving criticism from Dawn Lang about her dance performance, arguing with Misty Irwin about walking in the Dwarf Fashion show, or getting shoved off a boat into the ocean during a heated moment with Jason Perez.

Well, Jordanna, I'm going to miss you this season of Little Women: NY, but I'm glad to see that you've been keeping yourself busy with some exciting projects since Season 1 of the show ended.

That's what happens when you model in more than one country, right? As you may recall on Little Women: NY, the Dwarf Fashion Show founder Myriam Chalek chose Jordanna over Misty to walk in the show during Paris Fashion Week, which darn near tore these two friends apart. But as you can see in the above coverage of the event from The Associated Press, Jordanna looked absolutely stunning in the French show and seemed to have a blast. So all that drama with Misty was kind of worth it, n'est-ce pas?

Not only has Jordanna visited Paris for the Dwarf Fashion Show, but she has also been spotted in Punta Cana, Dominican Republic, and Florida, according to her Instagram profile. It's hard to tell whether or not she's still a New Yorker though.

Her Relationship Status Is Unclear

Jordanna's boyfriend Anthony shared some bittersweet news with her at the end of Season 1 of Little Women: NY. He was accepted into the school to become an air traffic controller, but that meant he would have to leave her in New York and move to Oklahoma in order to receive the training.

So how has this career move impacted Jordanna and Anthony's relationship? Well, I can't say for sure whether or not Anthony went through with the education, but after a romantic getaway together to Punta Cana last summer, the most recent photo of Anthony on Jordanna's Instagram profile is from September 2015, which you can see above. It's also captioned, "Wishing you the best of luck on your first day," which seems to suggest that he has started a new job of some sort. Jordanna hasn't posted any photos in Instagram featuring Anthony since then.

However, Anthony's Instagram, which is private, features a profile picture of him and Jordanna, which is a good sign. I'm just going to choose to believe that these two kids are still together because they're just too cute for me to believe otherwise.

She's Got A New Look

Out with the old, and in with the new! Jordanna has ditched her former blond hair to become a brunette. However, I'm pretty sure she would look fab in any hairstyle.

Her Burlesque Company Came Back With A Vengeance

Jordanna co-owns the burlesque company Sass N' Betties, which seemed to go on a bit of a hiatus in 2014, according to a post on Instagram. It returned last June for a show and a bootcamp, the company's website says. It looks like Sass N' Betties has been pretty quiet since then, but at least you can always just watch the above performance from May 2014 again and again.

She Returned To A Major New York Stage

Jordanna was back in the spotlight during the holiday season as a member of the Radio City Christmas Spectacular company. No, I didn't see her perform live, but I just know that she rocked it.

She Still Hangs Out With Her Little Women: NY Castmates

It doesn't look like Jordanna has any hard feelings about not being apart of Season 2 of Little Women: NY. She still hangs out with castmates Kristin Zettlemoyer and Jason, after all. She has even given the upcoming season's cast her best wishes on Instagram.

That sounds like more love than what's going to exist between the new cast of Little Women: NY.