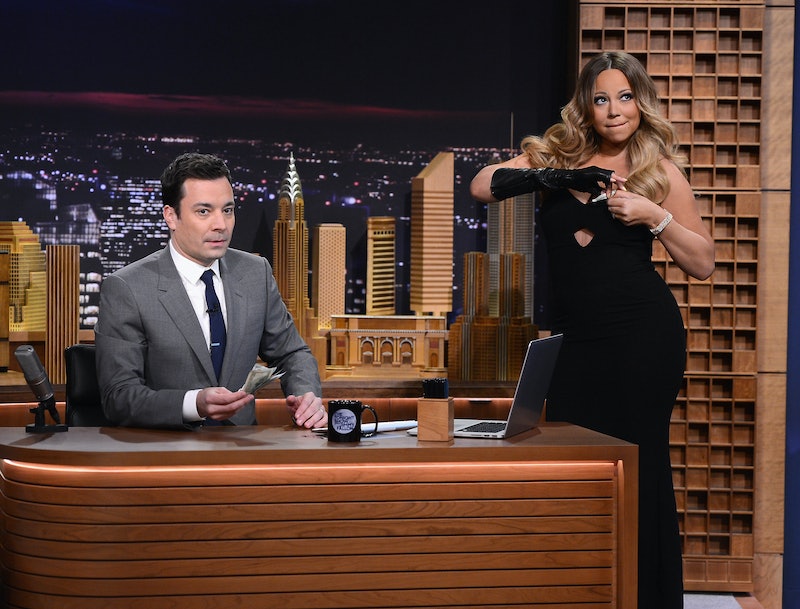 SHOOOOOOO-WEEEEEE. That was one heck of a debut. Jimmy Fallon killed it during his first Tonight Show Starring Jimmy Fallon . I say bravo to you, good sir. BRA-VO. From the moment Fallon stepped out on the stage, there was an air of excitement and actual readiness (to any skeptics out there) to the broadcast. The shiny new set felt like how I imagine really fancy New York hotel lobbies with wine bars must look like. And that’s how the whole show felt: shiny and new. Despite the fact that The Tonight Show has been a late night institution for decades, Fallon’s presence was wholly fresh.

Our host was visibly nervous during the first five minutes, because of course he was. During his first monologue, he came in slow and steady with a few light jokes: “I’ll be your host... for now.” He then went to talk about The Tonight Show legacy and how he grew up watching Johnny Carson. Fallon seemed truly humbled by the thought that some kid out there was up late watching him and then he found his parents and said, “I hope you’re proud of me.” COME ON WITH THAT.

After kind of awkwardly explaining how the opening monologue works, he ran back behind the curtain and presented his second monologue of the night. This time around it was much peppier and Tonight Show-y. There was much love for The Roots and surely Questlove’s “I Love NY” bowtie will be coveted for weeks to come.

The first silly segment was "The Tonight Show Superlatives," featuring Olympians and their high school class awards. My personal favorite was Charlie White as, “Most likely to say ‘Fear not, for I bring tidings of great joy!’”

Then when Fallon sat behind his Tonight Show desk for the first time, he said, “To my buddy who said I’d never host The Tonight Show. You owe me $100." And then a stream of mega celebs walked out one-by-one to slam a $100 bill in front of him. The $100 bet losers included Robert De Niro, Tina Fey, Joe Namath, Rudy Giuliani — who noted, “Thanks for bringing it back to New York” — Mariah Carey, Tracy Morgan, Joan Rivers (who once had a huge falling out with Carson), Kim Kardashian, Seth Rogen, Lindsay Lohan, Sarah Jessica Parker — who, in a moment of pure Carrie Bradshaw, gave him a $100 bill from her shoe — Mike Tyson, and Lady Gaga. Last, but certainly not least, Stephen Colbert sauntered on stage and dumped a bucket of pennies, took a selfie, and shouted, “Welcome to 11:30, bitch!”

And just when I thought The Tonight Show starring Jimmy Fallon couldn’t get any cooler, he tells us the opening credits are in fact a Spike Lee joint. And THEN he cuts to a performance by U2 on the top of Rockefeller Center. They were also backed by a marching band, with the Empire State Building and the Chrysler Building glistening behind them. I believe the word many would use is, “Epic.”

But wait... we’re not even halfway through the show yet. The next segment was the “Evolution of Hip-Hop Dancing” with none other than Will Smith. Fallon and Smith, who were decked out in super '90s tees and overalls, danced everything from “that leg thing no one can do” to the Dougie. (Fallon’s stank leg looks exactly like mine.) They also did the Carlton because it’s a treasure of television history.

Smith was also Fallon’s first-ever guest. The two talked about casual things like going to Dubai to skydive, because that’s what Will Smith does. The superstar actor made a joke about getting Jada pregnant backstage as a way of sort of complimenting Fallon on the birth of his 6-month-old daughter... sort of. We also learned that Willow Smith once wrote Fallon a really sweet note after he did an SNL sketch based on "Whip My Hair." Well isn’t that just a precious moment. Oh and The Roots obiously did a little rap about Smith because PHILLY.

U2 then returned to have a little chat, even though Larry Mullen Jr. sat rudely on the back of the couch and Adam Clayton proved himself to be a bigger Grumpy Cat than Tommy Lee Jones at last year’s Golden Globes. Nevertheless, Bono and the Edge were good sports. Bono even gave an inspiring speech about Fallon’s coffee mug, simply because he was asked to and name-dropped Nelson Mandela... because he’s Bono and he can do that, I guess. After a bit of coaxing, U2 performed an acoustic set of their Oscar-nominated song “Ordinary Love.” It was such a moment that I think even Will Smith was like, “Oh damn, I’m sitting on the same couch as U2 while they are performing live.”

And so Fallon left his first night as host with a gifted guitar from U2, a ton of love, kind words from Will Smith, and a huge fat stack of $100 bills. I have to call his night a success, though I will admit that I missed some of the rough edges from Late Night. Part of me wonders if he's just easing in his new audience. But Fallon’s hosting of The Tonight Show was nothing short of professional, polished, and truly exciting to watch. Here’s to what looks like it will be a very bright future for The Tonight Show and Jimmy Fallon in New York City.