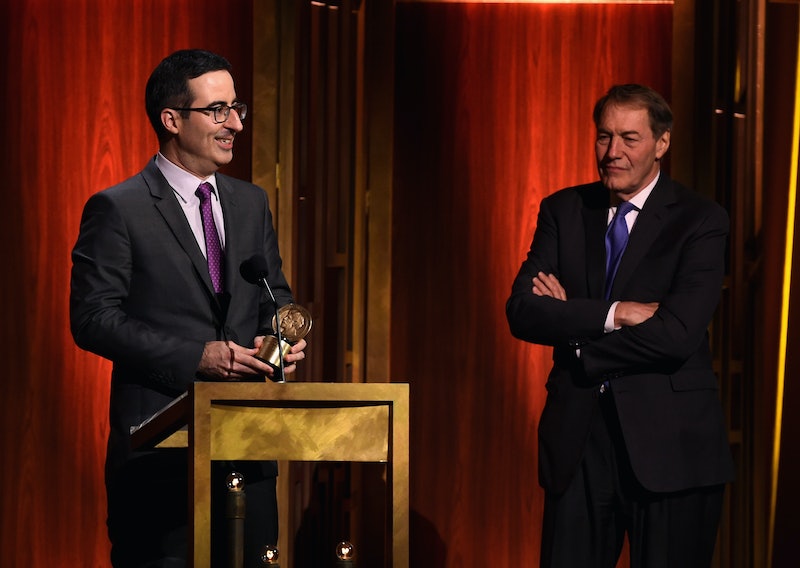 John Oliver is certainly now a recognizable name from his hit HBO show Last Week Tonight, as well as his time on The Daily Show, but who knew he was also a stand-up comedian? I mean, given his on-screen hilarity it does make sense that Oliver would have mastered the art of stand-up by now. In fact, many comedy TV hosts first made their rounds in the live comedy scene, so it's no surprise that Oliver did the same for himself. These funny John Oliver stand-up comedy videos will brighten your day and show you how your favorite British comedian became so witty.

Oliver actually began his stand-up career back in England, before coming to the U.S. and scoring a spot on The Daily Show in 2006. Apparently, even in the UK Oliver covered social and political issues as a major component of his stand-up on shows like The Edinburgh Fringe. This is where he developed his now-famous role as the "oleaginous journalist," which was his Daily Show correspondent persona.

Now that he's in the U.S., Oliver continues to do live stand-up comedy routines, and it's as culturally relevant and hilarious as ever. The following eight clips are some of my personal favorite examples of Oliver's sarcasm and fantastic sense of humor.

"We sent our criminals to somewhere that was nicer than where we lived." Honestly, I've always questioned Colonial England on this one. Oliver and I have achieved hive mind status.

When Lives Were Changed (Nearly)

This involves a sheep farmer. No further explanation is required.

Pleased To Be Racist

Oliver says Australia is the most comfortably racist country he has ever visited, but not the most racist. This is measured in shades of grey, people.

"The cameraman panned immediately to the guy on the jet ski. He didn't have to do that, but he knew what the right action was." I could not have said this better myself.

This was when Oliver "took a step into the future, and it felt terrible." Some strong feelings there, Johnny.

Americans are very gullible and ready-to-believe, according to Oliver. He is probably right. (Mermaids are pretty close to reality, TBH. Professional mermaids, anyone?)

Apparently, even James Bond is a world-renowned English author, according to some in rural Missouri. But you do you, people.

As is evident, John Oliver can almost literally improve any situation with his silly banter and jokes, so watch these clips whenever you need to brighten your day.

More like this
Mitra Jouhari Loves A Gross Joke & This 'Real Housewives' City
By Ivana Rihter
Watch Benedict Cumberbatch Lead An ‘SNL’ Medieval History Lesson On Roe v. Wade
By Grace Wehniainen
Playing A Scrub Nurse On 'Grey’s Anatomy' Made BokHee An Instagram Royalty
By Brad Witter
Cardi B Explains To David Letterman Why She Uses Her Star Power For Politics
By Jake Viswanath
Get Even More From Bustle — Sign Up For The Newsletter