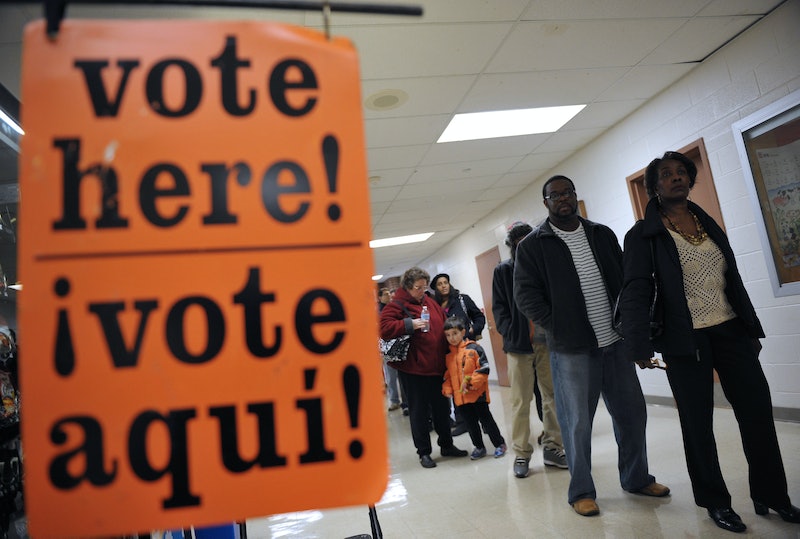 As Hillary Clinton's lead among pledged delegates over opponent Bernie Sanders widens, the superdelegates are once again becoming the focus of conversation. Sanders has claimed that he could still win the nomination because the convention will be contested — that is to say Clinton won't win the majority of all delegates without her support from superdelegates, which is actually pretty normal in the Democratic contest. Sanders says the superdelegates should vote the will of the voters except then Clinton would still win at this point. So go figure. But argument's sake, how many superdelegates does Indiana have?

These are the party bigwigs, former governors, congressmen, and party officials that have a say at the Democratic National Convention and are not subject to the will of the voters. They're a minority, but they have a significant role, just like Sanders argues. In Indiana, there are nine, and seven of them have already voiced support for Clinton as of April 19.

The other two are uncommitted. Of course any of them could now switch teams, something Sanders hopes will happen after he turns up the heat. They're also a small proportion of the total. There are a total of 92 delegates from Indiana; 83 of whom have their votes assigned via the primary vote Tuesday.

Five of the seven Clinton commitments come from DNC party members in Indiana. Another is Congressman André Carson. He endorsed Clinton back in July of 2015. At the time he told the Indianapolis Star that he thinks instinctively. "It's something I do when I feel like the person has an agenda that will reach and touch every day people, and will be the best CEO for the country," he said.

The other well-known superdelegate is Senator Joe Donnelly. He's been supporting Clinton since at least the fall, but has done so quietly. In January he reiterated his support for Clinton during a conference call. The Elkhart Truth quoted the Senator: "I’ve been supportive of Hillary Clinton. I think she brings a wealth of experience in regards to both foreign policy and economic policy. So I have supported her and will continue to do so."

There is also, of course, the Republican party. They don't have any true superdelegates as in same sense that the Dems do. The number of delegates per state is decided based on population. Small states like New Hampshire received 23 , while Texas gets 115 this year. In Indiana, the number is 57.

Of those 57, three are technically unbound delegates, which in years past would be free to vote for whom they want like a superdelegate. They're three muckety-mucks from the state's GOP party — typically the state party chair, the national committeeman, and the national committeewoman. This year, though, they're bound to the statewide vote.

Ultimately the superdelegates are probably here to stay this time around. And even if Sanders got his way, it wouldn't matter much, making them a moot point this election.