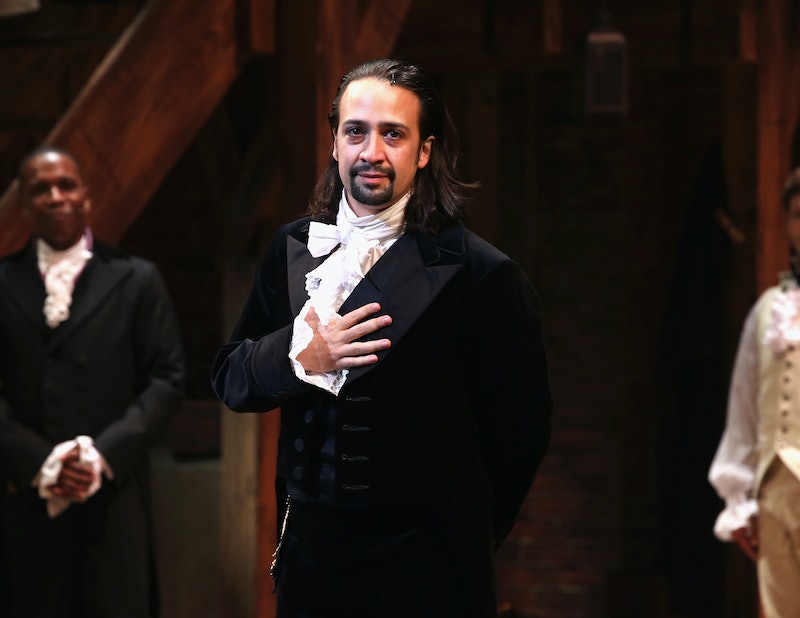 Alexander Hamilton made history and now the musical about him is making even more. Hamilton earned 16 nominations at the 2016 Tony Awards, making it the most nominated Broadway show of all time. Hamilton's 16 nominations squeak past prior record-holders The Producers (2001) and Billy Elliot (2009), both of which earned 15 nominations. But celebrating those shows didn't seem like a real step towards embracing a new kind of Broadway. Both musicals were movie adaptations that had big named stars attached to them. The Producers was made by Mel Brooks and starred Nathan Lane and Matthew Broderick. Billy Elliot's cast was lesser known, but it's music was written by none other than Elton John. Hamilton on the other hand made a name for itself without any names. Miranda was a Broadway wunderkind who previously created and starred in the musical In The Heights about a Dominican-American neighborhood in Washington Heights, New York.

Lin Manuel Miranda's hip-hop musical about the founding fathers was nominated in all 13 categories it could possibly be nominated in, including Best Musical, Best Book Of A Musical, Best Original Score, and Best Performance by an Actress in a Leading Role in a Musical. The show also earned multiple nominations in two categories with three of the show's actors duking it out for Best Performance by an Actor in a Featured Role in a Musical, while Miranda and Leslie Odom Jr., who plays Aaron Burr, will compete against one another for Best Performance by an Actor in a Leading Role in a Musical. “I’m just like my country, I’m scrappy and hungry, and I’m not throwing away my shot," Miranda's Hamilton says throughout the show, and it's clear the actor/creator himself hasn't thrown his shot away. Instead, Miranda's creativity shows rules are made to be broken. And, by the looks of the record-breaking nominations, the Broadway purists seem to agree.

Miranda had been working on Hamilton for years, even giving the world a sneak peek of the rapping musical at the White House in 2009 performing the opening song. People laughed as he talked about this musical he was working on about Alexander Hamilton and continued to chuckle while he rapped the opening number, which people now have gone crazy for. Of course, now he's the one laughing as the world fawns over that funny idea he had for a musical, which has since earned him a Pulitzer Prize and a MacArthur Foundation genius grant.

But six years ago, the world wasn't ready for Hamilton, they were ready for Billy Elliot, a more conventional musical based on the sweet 2000 movie that looked at a young, poor coal miner's son who wanted to be a ballerina. The original New York Times review talked about the message of Billy Elliot , which was a lot of the musical's appeal. It was about chasing your passion despite the fact that it may not make sense to others. As Ben Brantley wrote this was a "hard times musical" that takes place during the British miners’ strike of the mid-1980s and debuted on Broadway when the U.S. was amidst its own financial fall. "This show both artfully anatomizes and brazenly exploits the most fundamental and enduring appeal of musicals themselves," Brantley said. But, even in that description it's clear, people liked it because it still felt familiar. Its popularity wasn't going to change Broadway in new and exciting ways, but captivate Broadway audiences for the time being.

Its nominations weren't for being something new, it was for getting the old formula right. If anything, it was following in the very same footsteps as The Producers, a musical that eight years earlier had been the toast of the Great White Way. The show based on a Mel Brooks movie about two men who are looking to make a flop currently holds the record for most Tonys won with 12. But, on The Producers' 10-year anniversary, Salon looked at the popularity of The Producers and what it gave Broadway and it was a whole slew of movie-to-musicals adaptations, which included Legally Blonde, The Wedding Singer, and Billy Elliot, the latter being the only one to find real success.

Those musicals were popular, but they weren't game-changers. They weren't shows that would make people rethink Broadway like Hamilton has so quickly managed to do. Hamilton has become a cultural touchstone with a popularity that is so ubiquitous it even helped coerce the Treasury Department to keep Hamilton on the $10 bill, (#SorryNotSorry Andrew Jackson). It wasn't based on a movie, just history that needed a modern update. Miranda well-written rhymes give you a sense of the back in the day politics. It's done what The Big Short did for the economic crisis for America's founding fathers. Its 16 nominations seems to send the message that originality is something to celebrate and look towards as the future of Broadway. That there is a necessity to get new work on the stage and to take chances with new and diverse names. When it comes to why Hamilton is so special and deserves all the praise it's getting, The Daily Beast may have said it best: "Hamilton reclaims America’s story for America as it looks and feels now. The whole story unfolds through songs that have a modern rhythm and pulsing energy and seem to reinvent the musical for the YouTube generation."

Hamilton is youthful, which means a lot for Broadway, which has always felt a little more stodgy, upper crest, and certainly extremely white. But, with its colorblind casting, Miranda's play gets at the idea of what Shonda Rhimes has been doing on television for years now, trying to represent the world that we see around us. It's an American story, but a story that is for those who haven't always been represented. It's the tale of an immigrant who became a new man when he came to New York, but it's an example of the American Dream. Hamilton doesn't only update American history by showing a more diverse group of people, it updates how Broadway should look by hiring performers that look like the people they'd like to see in their audience. There will be no #TonysSoWhite controversy this year. Hamilton is a Broadway show that really seems like it's for everyone, and not because it's based on a Disney movie or another film we know and love. But because it tells a story about all of us.

The show has looked to include students by offering discounted tickets so that they can learn American history in a new way. They've made pre-gaming not just for football fans by having performances before the show with #Ham4Ham. Miranda's has asked Broadway audiences to forget what we think about Broadway and look towards the future, what it can be if we ditch the old ideals. The record-breaking amount of nominations for Hamilton show that Broadway is thinking in the same way. That they realize Hamilton's success is more than a fad; it's the direction Broadway should be going in from now on.