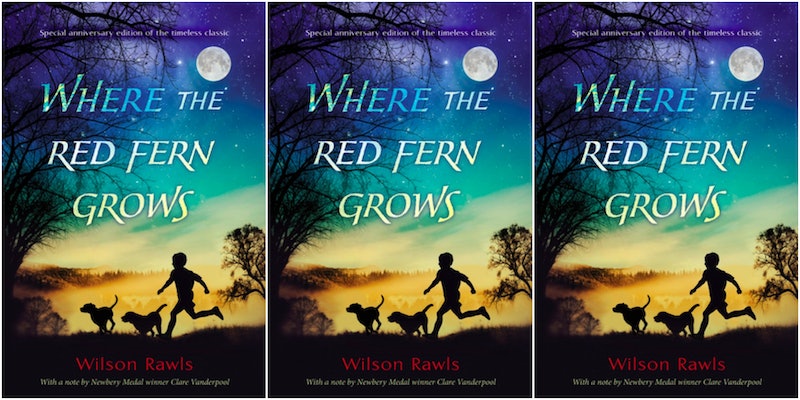 For the past half century, Where The Red Fern Grows by Wilson Rawls has taught children unforgettable lessons about life, about love, about friendship, about death, and, most importantly, about hope. In celebration of the novel's more than 50 years in print, Delacorte Press is releasing a celebratory special edition of Where The Red Fern Grows with a brand new cover.

Where The Red Fern Grows is the story of Billy, a poor boy in Oklahoma's Ozark Mountains, who dreams of owning not one, but two dogs. He works tirelessly to earn the $50 he needs to buy two coonhounds, which he names Old Dan and Little Ann. Together, these three are the greatest hunting force in the area, winning competitions against far more experienced hunters and becoming the best of friends along the way. When tragedy strikes, Billy learns that hope can grow out of despair and good friends are never forgotten.

Originally published in 1961, Where The Red Fern Grows has become a classroom staple in school's across the country, and the timeless novel is one that many children — and many adults — revisit time and time again.

Bustle is proud to exclusively reveal the new special edition cover of Where The Red Fern Grows, on sale May 3. The new edition will also include a tribute to the novel by Newbery Medal-winning author Clare Vanderpool, which you can read in its entirety below.

Author of the Newbery Medal-winning Moon Over Manifest and the Printz Honor-winning Navigating Early.

A boy and his dogs roaming among the redbuds, pawpaws, and dogwoods of the Ozark Mountains—what more could a reader ask for? And yet, Where the Red Fern Grows does in fact give us much more than that. Wilson Rawls’s beloved tale taps into the wellspring that runs deep in all of us—the desire for adventure, discovery, room to wander, and the “real love” that exists between a boy and his dogs.

My favorite stories are the ones that are rich in setting and firmly rooted in place. Having spent part of many summers during my younger years in the same Ozark hills and bluffs of northeastern Oklahoma, I feel very much at home in the main character’s, Billy Colman’s, neck of the woods. His nighttime treks stirred memories of walking down tree-lined roads so dark I couldn’t see my own feet, telling ghost stories on a gently floating dock, listening to tree frogs singing their vesper songs outside my cabin window, and lying under an explosion of stars while contemplating my place in the world.

Where the Red Fern Grows is a novel that invites the reader into the minds and hearts of its characters but provides a window into our own stories as well. Billy’s story is told from a point of looking back—from memory. An older Billy Colman encounters a grizzled redbone hound that draws him to relive his boyhood days. He willfully enters into those memories as his story unfolds “piece by piece.”

"Where the Red Fern Grows is a novel that invites the reader into the minds and hearts of its characters but provides a window into our own stories as well."

My story is different. I didn’t grow up hunting and I’m not a boy. But like Billy, I had dreams that would not be quieted. So it was with this shared sense of wanting that I entered into Billy’s story and fell in step beside him.

Billy Colman is the kid we all wish we still were: aspiring, hopeful, steadfast. The kind who braves frigid temperatures on a nighttime hunt in the remote hills and river bottoms of Cherokee country, holds his own in a skirmish with the town kids, and takes on the challenge of treeing the elusive “ghost coon” in an all-night vigil. He is also that special kind of kid who is brought to tears by feeling that he has let his dogs down. Billy’s “dog-wanting disease” takes him on a journey of courage and discovery that beckons to the kid, the dreamer, and the dog-lover in all of us.

And what wonderful dogs they are. From the first time we lay eyes on the two floppy-eared pups at the train station in Tahlequah, we know these dogs. Little Ann is smart, playful, and sweet—“she could make friends with a tomcat.” And Old Dan—impulsive, friendly, and loyal—“would not hunt with another hound, other than Little Ann.”

But the best dog stories are never just about the hunt or the adventure. They’re about discovery, friendship, and love. It’s the relationship between Billy, Little Ann, and Old Dan that brings this story to life. Their bond develops over time, from the trial and error of many a lost scent, through deadly scrapes with coon dogs, raccoons, and mountain lions, to moments of great devotion, trust, and sacrifice.

"But the best dog stories are never just about the hunt or the adventure. They’re about discovery, friendship, and love. It’s the relationship between Billy, Little Ann, and Old Dan that brings this story to life."

Like the older Billy Colman, it’s no wonder that I look back on my younger years with such clarity. Those early experiences, each so new and formative. Those early dreams that stay in the blood like a wanting disease. But years later, it is the memories that continue to reveal us to ourselves and spike the fever again. Where the Red Fern Grows taps into the wellspring that runs deep in all of us as we fall in step with a boy and his dogs and, piece by piece, our own stories unfold.