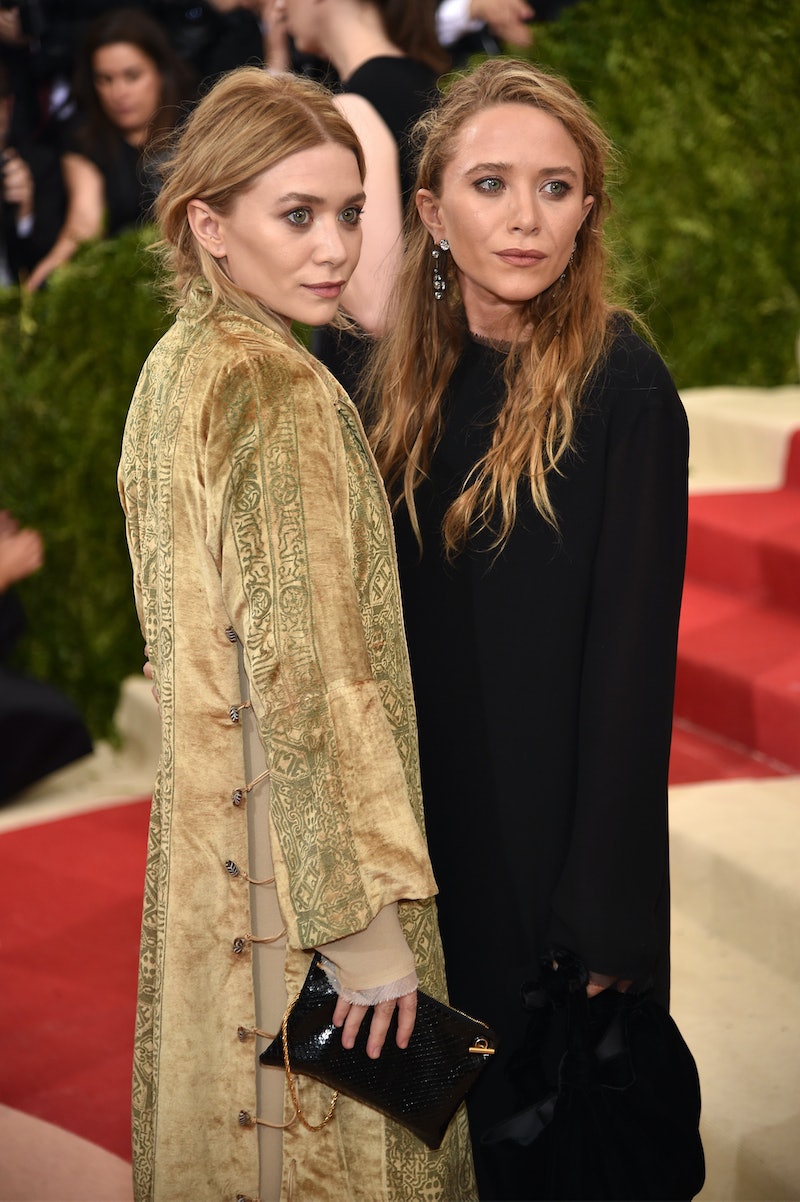 A celebrity that doesn't use social media in 2016 is pretty much like a unicorn — I'm not even certain they exist. But two extraordinarily famous people have managed to shun social media up until very recently, and their fans are undoubtedly dying for more. Mary-Kate and Ashley Olsen shared their first selfie in April as part of an Instagram takeover on Sephora's account to promote their new fragrance, My Nirvana, and it was an exciting moment for fans of the twins. Now they've taken an even cooler turn on social media, this time for Vogue's Instagram account at the 2016 Met Gala, and it proves that they don't have to be on social media all the time to be incredibly fascinating.

The Olsens appeared at the Met Gala in true Olsen form, looking effortlessly graceful and stylish as they posed for photos on the red carpet. They're pretty much a staple at fashion's most glamorous night of the year, and they didn't disappoint this year, of course. But the designers also joined in on some social media fun during the event, which was themed Manus x Machina: Fashion in an Age of Technology, by appearing in the Manus x Machina Experience, a trippy lighted room set to music and perfect for a unique photo op.

While other stars took the opportunity to do what they do best (model Kendall Jenner posed and did her best runway strut, Madonna pulled out her signature dance moves), Mary-Kate and Ashley did what they do best, which is look amazingly cool and mysterious, without even making a move. They're probably the only two people on the planet who can look sophisticated all with one turn of their heads.

It's this enigmatic quality that makes the Olsens so fascinating to many people — I mean, their perceived discomfort in the spotlight even inspired a recent exhibit in Brooklyn titled The Olsen Twins Hiding from the Paparazzi featuring a collection of portraits of the twins hiding behind various objects, including their signature large purses and cups of coffee. They manage to be elusive in a world where most celebrities share everything from their morning breakfast to their next career move with the masses.

It's definitely something that they have seemed to work hard at perfecting — the idea that they've deliberately shunned fame after growing up in a white hot spotlight to keep the focus away from their personal lives and on their work must be challenging in an age of paparazzi and constant photo ops.

The twins only seem to willingly appear in photographs when on a red carpet, like the Met Gala, and they haven't given a TV interview since 2014. In 2011, they told Vogue that they have no plans to curate their own social media accounts. Of Twitter, Mary-Kate said, "We’ve spent our whole lives trying to not let people have that accessibility, so it would go against everything we’ve done in our lives to not be in the public."

So it seems more than likely that Mary-Kate and Ashley will never be tweeting about their weekend plans, or Instagramming their brunch selections, and that's honestly pretty refreshing. After all, what's cooler than someone who's out their living their life without constantly focusing on their next status update or finding the perfect filter? These two may be on to something... at least, something other than the next incredible style trend.