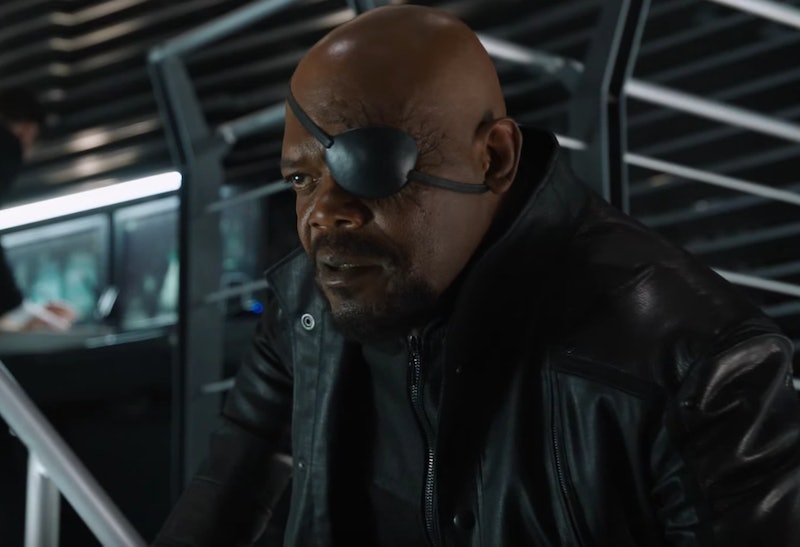 As played by Samuel L. Jackson, Nick Fury has always been the most mysterious character in the Marvel Cinematic Universe (MCU). As Tony Stark put it in The Avengers, Nick Fury is "the spy." He's also the man responsible for bringing together the Avengers. (I like to think of him as the Avengers' godfather.) So, obviously he has to pop up in Captain America: Civil War to stop his children (Iron Man and Captain America) from fighting, right? Wrong. Surprisingly, Nick Fury isn't in Captain America: Civil War — he's barely even mentioned. This is pretty odd, considering the fact that his beloved Avengers team is imploding before his eyes — uh, eye.

Last fans saw Nick Fury, he was a fugitive spy, operating even deeper in the shadows than when we first met him. After the collapse of SHIELD and the emergence of HYDRA in The Winter Soldier, Nick Fury went underground. He came out of hiding briefly to help rally the Avengers in their fight against Ultron in Avengers: Age of Ultron, but he did little more than show up at Hawkeye's super secret family home, give a pep talk and quietly help the Avengers save innocent people (OK, so he did a lot). So, we know he's alive, and he's keeping tabs on the Avengers. But what changed to make him decide to go radio silent in Civil War?

Story-wise, it could simply be that Nick Fury is too busy doing super spy stuff to get involved in the war between Iron Man and Cap. Not to mention the fact that, legally speaking, Nick is dead. He can't exactly insert himself into a political debate over the Sokovian Accords — one of the main points of contention between Cap and Iron Man in Civil War. So, there's that. Furthermore, in the original Civil War comics, Fury kept himself out of the conflict, though he was allied to Team Cap. It's completely in keeping with the original story for Fury to be MIA during the fight between Iron Man and Captain America.

A more concrete explanation as to why Nick Fury isn't in Civil War is Jackson's contract with Marvel Studios. After the official cast list for Civil War was announced in 2015, fans immediately noticed Nick Fury's absence. Granted, this is Marvel, so surprise cameos are to be expected. However, Jackson confirmed that he would not be taking part in Civil War in an interview with Collider , saying, "I'm not in Captain America 3." More intriguing than this confirmation, however, was what Jackson said next. "I can't figure that out, but I'm not. I guess I'm still out there, trying to figure out what happened to SHIELD and who these other people are," Jackson added. Even Jackson seems to be confused by Nick Fury's absence from Civil War.

In that same interview, Jackson also let slip that he was in the process of negotiating an extension on his contract with Marvel Studios. So, it's possible that contract negotiations prevented Jackson from participating in Civil War. It's also entirely possible that Jackson's always busy schedule got in the way of playing Nick Fury. The actor has four big movies set for release in the coming year — The Legend of Tarzan, Miss Peregrine's Home for Peculiar Children and Kong: Skull Island. Even the hugely prolific star can't have the time to be in every movie.

For fans worried that the MCU might be done with Nick Fury entirely, keep in mind that that is incredibly unlikely. Nick is almost as much a part of the Avengers as one of the superheroes themselves. (Hell, if you ask me, he can go ahead and replace Hawkeye right now.) There's simply no way that he doesn't at least appear in one of the final two Avengers movies. In fact, IMDB has him listed on the rumored cast list of Avengers: Infinity War — Part 1.

So don't fret, MCU lovers, Nick Fury will be back. And, in the meantime, just sit back and enjoy the superhero overload that is Captain America: Civil War.