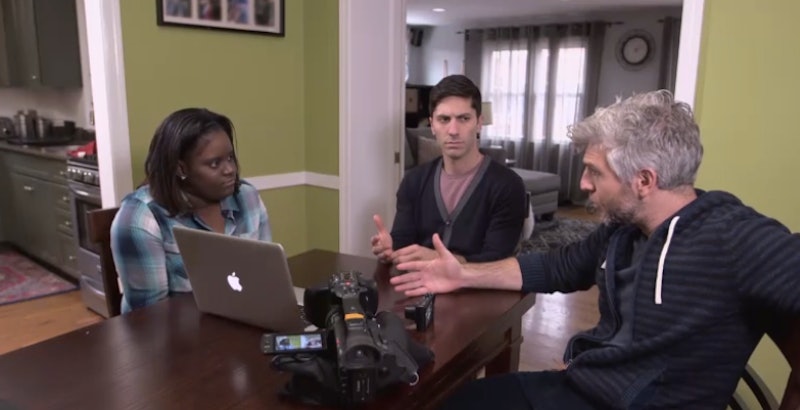 Coming off of what might be Catfish's most surprising episode to date, Season 5 of the MTV series continues with what looks like a classic Catfish story. New Catfish couple Paris & Tara met online and quickly began to fall in love, but the telltale signs of a catfish began to arise. If a Catfish episode begins with the person saying that their partner doesn't video chat, flaked out on meeting in person, and only sends a couple of highly posed pictures, you can practically write the rest of the episode yourself. Given that this is the setup for the Paris & Tara episode, it seems like the most obvious solution is going to turn out to be true: Tara was hiding her identity and pretending to be someone that she's not. But Catfish may have a surprise in store for Paris.

After establishing their relationship through texting and chatting, Tara began to pull away from Paris, who started to suspect that her online girlfriend might not be exactly who she claimed to be. Season 5 has been full of weird twists, so it's possible that the answer won't be that simple... perhaps Tara is someone Paris already knows or has some other kind of relationship with. But if there's anyone who can piece together the real story behind Tara, it's Nev, Max, and the whole Catfish crew, but before the episode airs on May 4, here's everything we know about the pair.

After some foiled attempts at meeting up together, Tara completely stopped talking to Paris, who was smart enough to realize that she was probably being played, and tried to move on. But Tara is the one who reconnected with Paris, not the other way around. So she must have some kind of motive to reach out.

There Could Be Some Sexuality Issues

I'm not sure why Catfish decided to animate these text messages since the context in the episode isn't clear yet, but it's possible that either Paris, Tara, or both have never been in a relationship with another woman before.

Cell phone radiation giving you a headache is a pretty creative, if stupid, reason to avoid talking or Facetiming your girlfriend. So either Tara has a very strange relationship with technology, or there's a reason why she doesn't want to talk on the phone (perhaps someone pretending to be a young woman who... isn't who she says she is?).

MTV's summary of the episode says that while investigating Tara, "they make a shocking discovery that casts suspicion onto Paris herself." Could the non-calls be coming from inside Paris' house?

There's A Woman Named Dana In The Mix

When Paris began to suspect that Tara wasn't really who she said she was, she began to do some research on her own. Yep, Paris is an amateur Catfish expert, because she busted out the ol' reverse Google Image search. Unfortunately, she discovered that Tara's photos might belong to a woman named Dana from New Jersey.

It's The Second-To-Last Episode Before The Hiatus

This doesn't guarantee that the episode will turn out to be either a success or a failure, but if you're a Catfish fan, don't skip this episode because it looks like a classic Catfish situation. First of all, there's no proof that this will turn out the way it seems like it will. But with only two episodes left before a hiatus, you'll want to tune in and watch as many new episodes as possible.