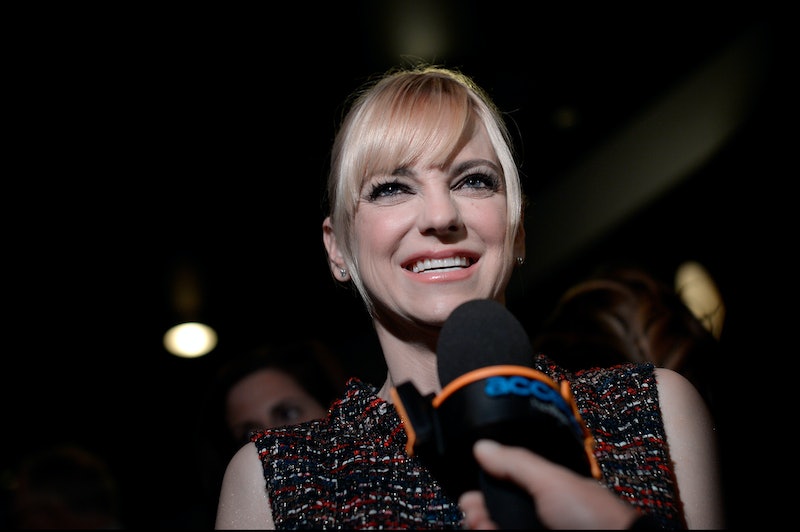 Despite what Anna Faris would like you to think, she's very good at giving advice. Faris' new podcast, Anna Faris Is Unqualified , which is described as "not-so-great relationship advice from completely unqualified Hollywood types," is actually the exact opposite. Her delightfully low-budget podcast has her sitting down in her house with some friends sharing her own stories about love and dating. The format is off the cuff with recent topics on the podcast, which debuted last November, ranging from armpit hair length to laissez-faire farting practices to what professions you shouldn't date. (According to The Mindy Project 's Ike Barinholtz, magicians wouldn't be great in bed, but woodworkers are always a good choice.)

Faris talks openly about herself in a way that's unguarded and refreshing and always gets her famous friends like Jenny Slate, Olivia Munn and Ellen Page to do the same when they stop by and chat. When Faris had Captain America himself, Chris Evans, on Unqualified , she even got him to talk about whether he's a breast or ass man before sharing his advice for a woman whose best guy friend was getting married and leaving her behind. And the thing about Faris' very funny and very sweet podcast is that it's all about helping others. With Unqualified, Faris has basically become the Dear Abby for the Podcast crowd.

It's easy to pitch this podcast as being "Anna Faris talks to her very, very famous friends," but it's not really about getting celebrities to talk about their pubic hair — something both Slate and Munn talked about on their respective two-part episodes — it's about giving relationship advice. Each episode has Anna and her guests taking calls from fans looking for some help with their partners, families, and friends. Sure, Faris isn't a licensed professional, but she treats this aspect of the podcast seriously, and expects her guests to do the same. It's these moments on the show that you hear how committed Faris is to giving helpful advice, despite believing she's unqualified to do so.

Faris takes on difficult topics like a woman who called in during an episode with comedian Jason Mantzoukas (aka Dennis Feinstein on Parks and Recreation) to say her deeply religious family didn't know she was dating someone who was Jewish. The actress doesn't shy away from giving her opinion, which often has her playing the nice guy role. Basically, if this was American Idol, Faris is the Paula Abdul, while her guests get to be more of the Simon Cowell, going in a little harder, even sometimes disagreeing with her. Not that she seems to mind. Her main goal is to give good advice, which is why nearly every episode features a flabbergasted sounding Faris complimenting her guest's advice giving skills.

The reason the advice segment works on this show and isn't, as Faris jokes, not-so-great, is because it seems like it's coming from a caring friend, who is invested in making sure things work out. When a man called in for an episode with Shaquille O'Neal looking for a way to let his wife know he was still attracted to her after gaining weight, the basketball superstar admitted he had been through the same thing, feeling un-sexy because he had gone up a size or two. It was a moment you wouldn't expect and gave a real sense of what kind of safe space Faris creates for anyone who appears on the show. Nothing seems to be off limits or too personal; it's just about being honest.

Faris isn't doing this podcast because she's looking for some kind of recognition; she's doing it because she really seems to care. She's even asked her callers to get back in touch with her to let her know how everything goes and has already had one success story. It was a woman who had been dating her boyfriend for a long time and was hoping he would take the next step. After Faris told her to maybe go away and think about what she wants, this woman came back and got engaged. The caller says it was the Unqualified advice she got that helped get her to this point. Now the actress says she's waiting for her Save The Date — and I'm inclined to believe she means it.

Whether Faris wants to admit it or not, her advice, no matter how bad she wants to say it is, is doing a lot of good things for people. And not just the ones who call in, it's the ones that listen week to week looking for some help of their own. So basically, start listening to Anna Faris is Unqualified. It just might change your life.