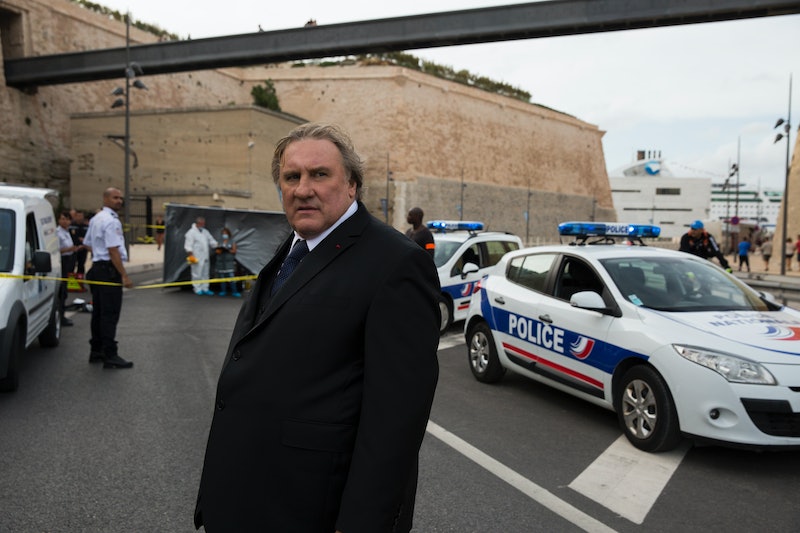 Netflix is going très international by releasing the French-language series Marseille on Thursday, May 5. Gérard Depardieu portrays Robert Taro in Marseille , the longtime mayor of the titular French city. If you aren't familiar with French politics, don't start thinking that Robert Taro is actually the mayor of Marseille or that the series is necessarily an accurate representation of the city. Let me end any speculation right now: Robert Taro is not a real person or officially based on a real person. When rumors first swirled around about the political drama hitting Netflix, Variety and other outlets reported it was comparable to that other political Netflix series House of Cards , so you can expect a dark, twisted, fictional take on the people in power in the French seaside city.

In real life, the actual mayor of Marseille is Jean-Claude Gaudin. The city, located on the Mediterranean Sea in the Provence region of southeastern France, is the second most populous city in France (after Paris) and the oldest city in the country. The British newspaper The Telegraph described the city of Marseille as a "renowned as a vibrant Mediterranean [sic] melting pot," which I can personally attest to after visiting there while I studied abroad. Plus, pop culture gave a nod to the diverse immigrant population of Marseille in Love Actually when Colin Firth's character proposes to his Portuguese love Aurelia in the city.

According to a release from Netflix, Robert Taro in Marseille has been the mayor of the city for 20 years and as an upcoming election approaches he "prepares his last coup: push through the vote for the construction of a casino in the historic center of the Marina." The politician in the series has already secured a successor to his mayorship — Lucas Barrès — who starts making political power plays of his own, according to the series' trailer.

Like the fictional Taro, the real-life Gaudin has been the mayor of Marseilles for two decades since he was first elected in 1995, according to a registry of city mayors. And the idea of a casino being built in Marseille is something Gaudin has had to deal with during his tenure as mayor. However, the parallels between Depardieu's character and Gaudin end there.

While Taro may be trying to get a casino in Marseille in the Netflix series, Reuters reported that Gaudin initially rejected the idea of a casino in his city. However, in January 2016, he admitted during a press conference that a casino would most likely end up being built in Marseille. In an English translation of his statement to the press, Gaudin said, "For the casino, I was hostile, I've never played in such an institution. But we must move with the times, and I let myself be convinced. The difficulty is to find the place. I think that one day there will be a casino in Marseille." This is a much different sentiment from the fictional Taro, who is pushing hard for the existence of a casino in Marseille.

While I won't pretend to understand all of the ins and outs of French politics, I do know that I'm excited for an international series on Netflix made in France, created by French artists, and in the French language. After all, I did write a whole paper in French about the portrayal of Provence and the city of Marseille in film and TV, specifically citing an earlier role of Depardieu's, after studying in the beautiful region. But, even for people who do not have such a love of this specific culture, I'd venture to say watching Marseille will be the worth the pain of reading the subtitles. I mean, how could a French character in the style of Frank Underwood not be intriguing?