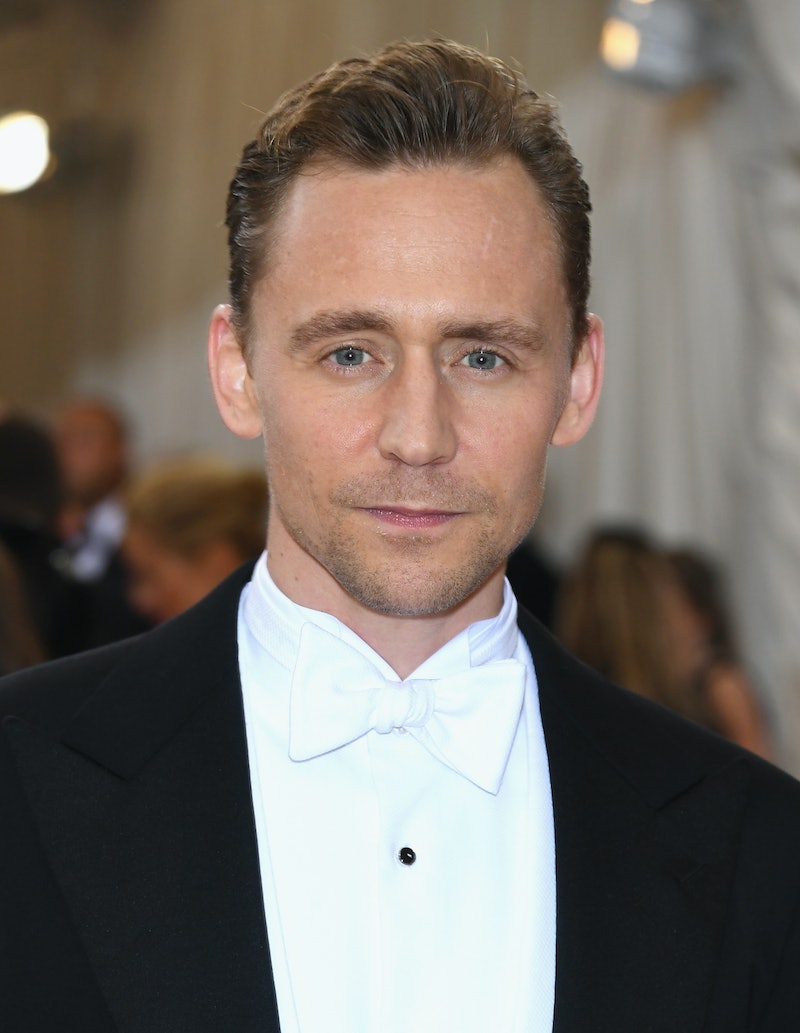 To say I was happy upon learning that Tom Hiddleston would attend the 2016 Met Gala would be an understatement. Just to know he'd be making his debut in a dapper suit, where he would not only work the red carpet like he always does, but also showcase that swoon-worthy smile of his, was enough for me. Then, he had to go and be his amazing self — again. Tom Hiddleston and Taylor Swift danced at the Met Gala together. I repeat, T. Hiddles and T. Swift danced with one another at the biggest annual fashion event. I know, I know. It's a lot to process.

After watching the video footage of the two talents showcasing their dancing skills, I was at a loss for words due to the many emotions I experienced — and am still experiencing. But, I'm going to do my best to articulate the gloriousness that is Hiddleston and Swift busting a move. Per BuzzFeed, the videos were posted to both the Met Gala and Karlie Kloss' Snapchat stories. Of course, they then found their way onto to Twitter and Instagram so they could be savored and watched for the rest of time. I mean, who wants these particular snaps to disappear after 24 hours? That would just be a waste of a snap, if I do say so myself.

As you can watch below (on repeat, of course), you will see the actor and the singer dancing to Beyoncé's "Crazy In Love" and T.I.'s "Bring Em Out." With that, let's analyze each video, because they are something that need to be discussed.

Getting Down To T.I.

Clearly, Swift likes to "shake it off" on the dance floor and in her songs. Her arm action is on point. As for Hiddleston, yeah, he hits each beat perfectly with beautiful hand motions and proves no part of his body will go to waste when he's on the dance floor. Finally, Hiddleston's ending twirl definitely deserves a 10.

First, this video is way too short and I need more. Second, who better to bring two superstars together on the dance floor than Beyoncé, herself? I can't get enough of T. Hiddles spinning and twirling T. Swift. Yes, I am jealous, OK?

As wonderful as the first two videos are, I'm going to very honest about this one by saying it is somewhat awkward. Have you ever been dancing and totally feeling a song, then a weird transition happens into the next one? Not only do you lose your momentum, but then you're like, "What the heck do I do? I can't dance to this." Yeah, that's exactly what happened here. It's uncomfortable, but it just goes to show you that not even Hiddleston and Swift are perfect on the dance floor.

I think it's safe to say that when it comes to dancing, nobody puts T. Swift and T. Hiddles in the corner.

More like this
Taylor Swift & Her Mom Clap Back Against The “Shake It Off” Plagiarism Lawsuit
By Jake Viswanath
Taylor Swift Wanted To Be In 'Twilight: New Moon,' According To Its Director
By Grace Wehniainen
Twitter Is At Odds Over Taylor Swift’s Possible ‘All Too Well’ Oscar Run
By Brad Witter
Sophie Turner & Joe Jonas’ Fave Taylor Swift Album Is Full Of “Bangers”
By Sam Ramsden
Get Even More From Bustle — Sign Up For The Newsletter