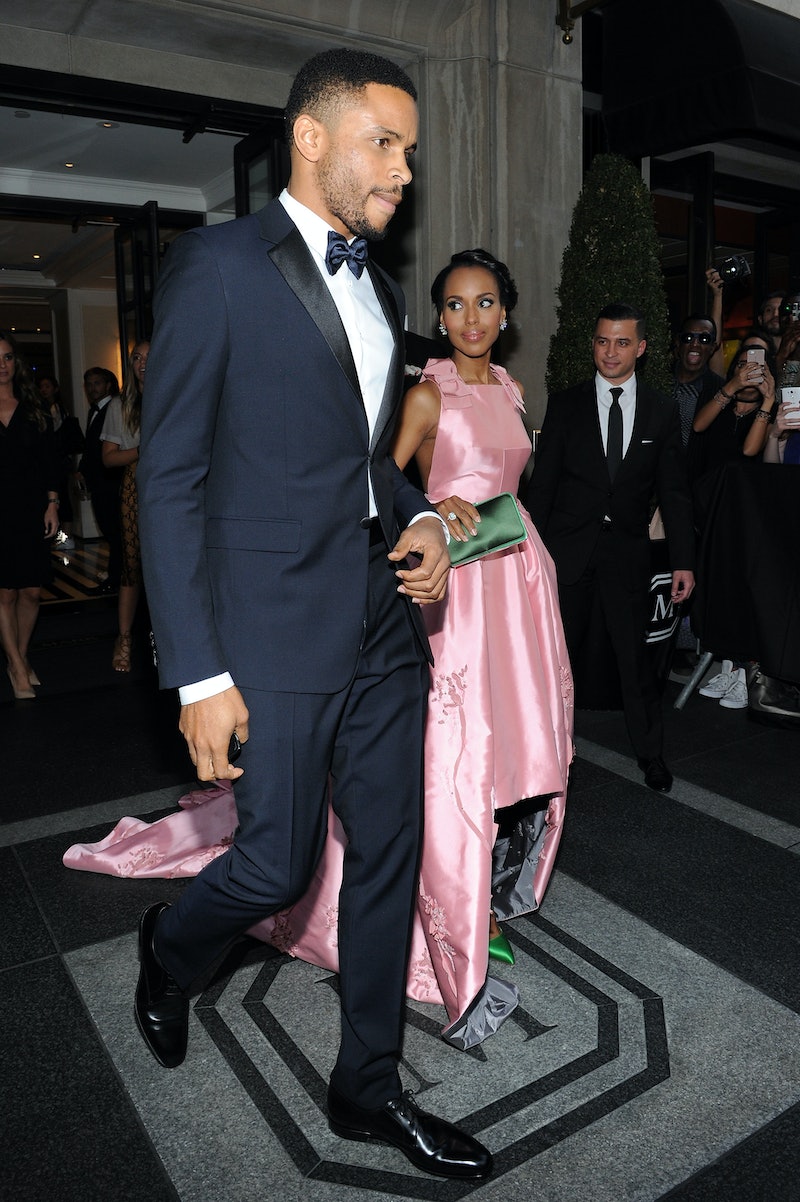 Though the actor herself has yet to speak out on the news herself, according to multiple reports Kerry Washington is pregnant with her second child, and on Monday she cradled her baby bump on the red carpet of the 2016 Met Gala. This is exciting news for the Scandal star and her husband, Nnamdi Asomugha. The two were married in 2013, but are fiercely protective over keeping their relationship private. So, how did Washington and Asomugha meet? Turns out, their beginnings are as elusive as their entire marriage has been so far.

Washington herself has outright refused to discuss her personal life in any way, shape, or form, telling E! News in March,

So it makes perfect sense why she may not officially announce her second pregnancy, preferring to let red carpet photos do the talking for her.

As for her marriage to Asomugha, it's notoriously low-key. The two are seldom photographed together, and Washington frequently appears on red carpets and at events solo or with colleagues and friends. It makes sense, then, why there aren't any confirmed stories about how they met. But if you choose to believe what the New York Daily News calls a "reliable" anonymous source, Washington and Asomugha met in a totally fitting way for the actor and retired football player, who has also acted himself. According to a New York Daily News report from 2013, the couple "started dating a few years ago after he and a mutual friend of theirs went to see Kerry on Broadway in Race." Supposedly, the Scandal start told Nnmadi "she didn't date athletes, and he told her he didn’t date actresses, but they got together anyway."

If this is true, it's pretty adorable that both Washington and Asomugha found love despite their rules about whom they would and wouldn't date. Who among us hasn't sworn up and down that we will only date a certain type or have certain romantic requirements, only to fall for someone who's completely opposite anyway?

As for Washington and Asomugha, their rumored meeting also suggests that they first met around sometime in 2010, as Race premiered on Broadway in December 2009 and ran until August 2010. However, it's highly unlikely that Washington will ever share stories of their initial introductions, which is totally fine by me. There's simply nothing scandalous about wanting to keep some things close to the vest, girl. Do your thing.

More like this
Perrie Edwards & Alex Oxlade-Chamberlain Have The Sweetest Engagement Pictures
By Lara Williams and Frances Stewart
Mollie King & Stuart Broad Have The Most Relatable Wedding Plans
By Sophie McEvoy
Selena Gomez Is Fine Being Single, But She Still Manifested Romance On 'SNL'
By Martha Sorren, Jake Viswanath and Jack Irvin
Martin Hancock’s Wife Played A Key Part In His Return To 'Coronation Street'
By Catharina Cheung
Get Even More From Bustle — Sign Up For The Newsletter