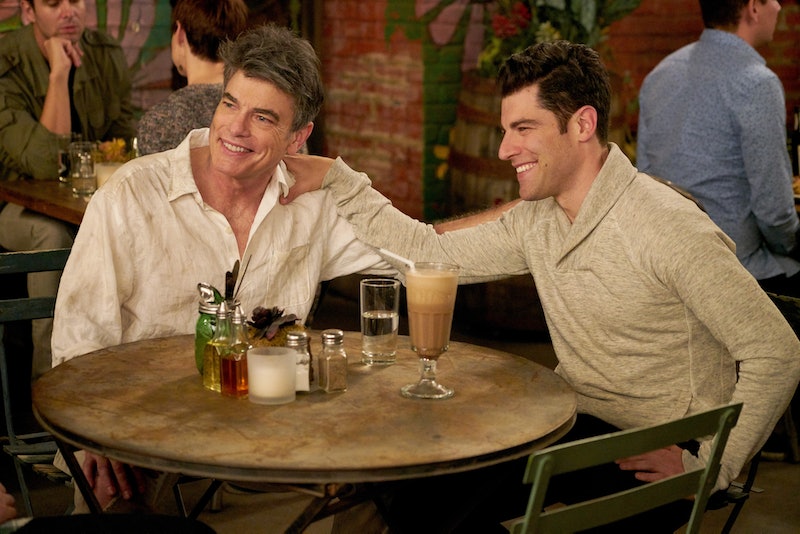 Ever since he was a little kid, Schmidt's been constantly disappointed by his dad. Every time he thinks Gavin has changed, he ends up finding a new way to let him down. But if Tuesday night's episode "Return to Sender" is any indication, this latest attempt at establishing a substantial father-son bond may actually be for keeps. Thanks to an accidental butt dial, Schmidt agreed to meet with Gavin and try to move past the whole making-out-with-Jess debacle for their last rendezvous. And while Nick was immediately skeptical that Gavin would end up hurting his son like he's done a million times before, this New Girl reunion between Schmidt and his dad felt different this time and could very well be the start of a beautiful friendship.

Speaking of friendships, though, it was absolutely adorable to see Nick get so protective of Schmidt throughout the episode. Fearful that Gavin was going to cancel on his plans with Schmidt, Nick confronted him outside the loft elevator and basically schooled him in the ways of proper parenting. He told Gavin that he needs to know that he'll show up for Schmidt, not just when it's fun, but even during the hard times as well. Being a parent means being there always, not just when it's convenient. And seemed like the message definitely sunk in for him.

When it looked like his dad had bailed on him yet again, Gavin showed up and explained why he was so late. It turns out that he doesn't want his son to get married in a rundown building, so he managed to get back their deposit and offered up his own vineyard as the venue in return. He promised Schmidt that he's going to change, and you know what? I believe him. (I knew he had a little Sandy Cohen in him!) Let's just hope that he doesn't end up letting Schmidt down on the biggest day of his life.

More like this
Here’s The True Story Behind 'A League Of Their Own'
By Morgan Leigh Davies
Watch The Trailer For Netflix’s Edgy New Comedy 'FAKES'
By Brad Witter
Does 'Locke & Key’s Ending Mean There Could Be A Season 4?
By Sophia Moore
Jane Lynch Revealed Why She’s Leaving 'Funny Girl' After Lea Michele Was Cast
By Grace Wehniainen
Get Even More From Bustle — Sign Up For The Newsletter