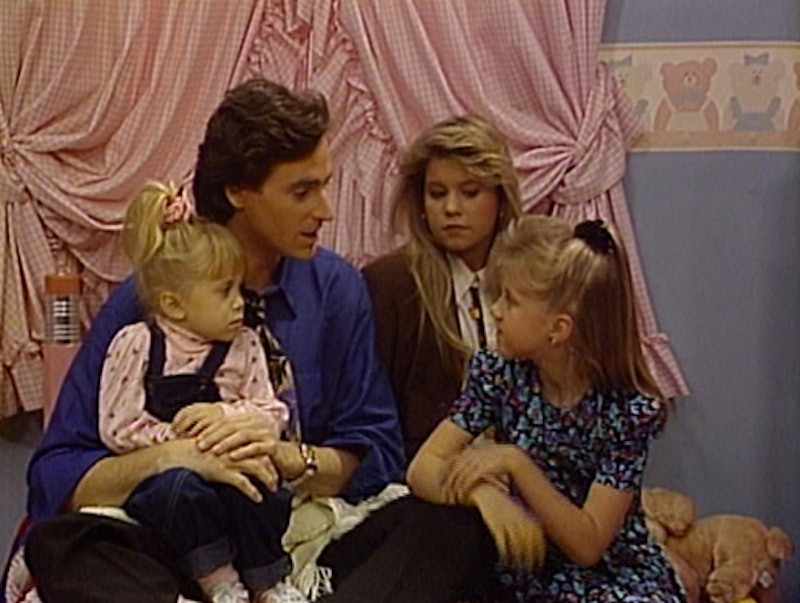 If you’re someone who grew up in the ‘90s, no doubt you remember countless encounters with your parents from back then, ranging from the sweet and loving to the maddening. But despite this abundance of memories from the ‘90s, there are certain things you’d never have said to your parents back then — things that were simply rude or that would have been utterly ludicrous, like “I only watch TGIF so that I can watch 20/20 afterward,” or “I wish this Fruit by the Foot was six inches shorter,” or “Yes, I would be delighted to share my bedroom with my little sister.”

Of course, there are a lot of things you would say to your parents, like “Please record Sailor Moon for me. I’ll draw you a diagram of how to use the VCR,” and “Can I have a hubcap collection like Clarissa?” and “I’ll do dishes every night for a year if you let me pierce my bellybutton,” and “Why does everybody care so much about a blue dress?” and “Danny Tanner would never treat his kids this way!” (I’m suddenly feeling the need to apologize to my mom and dad for all of my adolescent snark in the ‘90s. Sorry, parents.)

Keep reading for 14 statements that you’d never have uttered in the ‘90s (to your parents, anyway).

1. “Please don’t give me a Lunchable. I’d much rather have a sandwich.”

Lunchables were the ultimate school lunch, more covetable and tradable than any other food (with the exception of Pizza Lunchables). So on the rare occasions when you were allowed to have one, there’s no way you would turn it down for a measly sandwich — even if, objectively, the sandwich was a whole lot tastier than the yellow box’s prepackaged cheese and wet lunchmeat.

When I was in the fourth grade, my mother banned my sister and I from watching 90210, on the grounds that the goings-on between those 25-year-old California teenagers was too mature for kids whose ages were still in the single digits. That was probably true, but we were tormented by the loss of our favorite show and will never, ever admit that she was right.

3. “No, thanks. I already have plenty of Beanie Babies.”

If you were a Beanie Baby aficionado, you knew in your soul that you could never have enough of them. They were soft and cute, and a savvy investment. How else were you going to pay for your private plane as an adult, if not through the sale of priceless understuffed plush toys?

4. “I’m not really into labels. Please give me the generic version.”

Maybe it’s just me, but I remember kids and teens in the ‘90s being especially obsessed with brands — there was pressure not simply to conform to certain fashion trends, but to have clothes carrying specific labels, from CK1 to Guess to Teva to Umbro to Gap. I don’t know if that was a ‘90s thing or simply part of being an adolescent. Are contemporary 12-year-olds as obsessed with logo-bearing t-shirts as we were back then? I’m asking.

5. “I think these moon shoes are dangerous.”

Moon shoes were basically trampolines strapped to your feet that you were supposed to bounce around on, but often “bouncing around” really meant “falling on your face.” They were hella dangerous, but of course you would never admit that to your parents.

Heck, I would never say that now.

7. “I think this whole Furby thing is just a gimmick.”

The ‘90s child didn’t care if the latest “hot” toy was just a fad. In fact, faddishness only made a toy more desirable. In general, if something was advertised on Nickelodeon, you were pretty much guaranteed to want it more than life.

“They have names, Mom. New Kids on the Block. *NSYNC. The Backstreet Boys. 98 Degrees. And… all the other ones. And they are All. Totally. Different.”

God save the parent that got in between a ‘90s kid and the most popular sitcom on TV. In the ‘90s, missing an episode of your favorite show meant that you wouldn’t get a chance to see it again until reruns aired in the summer. And if you missed it then, well, you were just SOL forever.

10. “I would prefer real fruit over these Gushers, plz.”

Healthy, local, organic food may be all the rage now (among adults, at least), but in the ‘90s, any kid would have chosen plasticky, sugary “fruit snacks” over an actual grape, hands down.

Email addresses have gotten increasingly boring in the 21st century, as people have begun to realize that going by “NSYNCLuvr7” may not be the best idea in all situations. But in the ‘90s, screen names were bastions of creativity, little 10-character badges that you could use to describe your most essential self. As an adolescent, this was a rare opportunity to create your own identity from scratch, so a lot of pondering went into the screen name-crafting process. The idea of letting a parent do it for you would have been insane.

In the ‘90s the new fangled Internet offered kids and teens opportunities to have their own private lives online, out of reach of their parents. Is it any wonder that we protected that privacy fiercely?

Even the most clueless parent (heh) knew that the dread "W" was totally rude. You may have said "Whatever" to your siblings a million times, but you kept it away from your parents, if only out of fear that you'd be banned from TGIF as punishment.