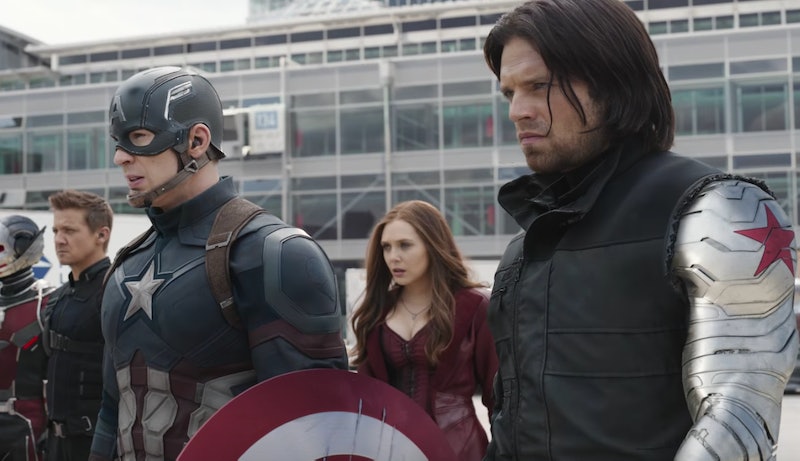 When the official cast list for Captain America: Civil War came out, fans all thought the same thing: without the Hulk, there will be no Science Bros, and without the Science Bros, what bromance even is there? Momentary panic ensued until we all remembered: Stucky! The Winter Solder might be a stoic, brainwashed assassin, but somewhere in there he's still Bucky Barnes, Steve Rogers' best friend till the end. Who needs the Science Bros when you've got the O.G. Marvel bromance? To prepare yourself for the inevitable feels Marvel's about to bring, below are 11 Stucky moments to revisit before Captain America: Civil War .

In Civil War, one of the major points of contention between Iron Man and Captain America is the treatment of The Winter Soldier. Where the world sees him as a threat and a criminal, Steve sees his best friend. So, when the government comes for Bucky to arrest him for The Winter Soldier's crimes, Cap swears to protect him. Of course, this is just one factor contributing to the fight between Iron Man and Captain America, but it is the most heartbreaking. So, for all you Team Iron Man people out there trying to understand Team Cap, if these Stucky moments don't have you rooting for Steve in his quest to get his BFF back, then I don't know what will.

When fans first met Steve and Bucky in Captain America: The First Avenger, Bucky had Steve's back on the streets of Brooklyn when a young, and skinny, Steve Rogers was picking fights and dreaming of going overseas to fight in WWII. Adorbz.

After spending a night together at the World's Fair, Bucky, who is leaving to fight in the war, says goodbye to Steve in a scene that is both heartwarming and devastating.

Now transformed into Captain America, Steve gets his first chance to prove himself in battle when he leads a mission to save Bucky and other soldiers captured by Red Skull. It's a brief reunion, but watching Bucky see everything his best friend has become is pretty spectacular.

The bar scene in The First Avenger is definitely one of the most fantastic Bucky/Cap moments in history. After their battlefield reunion, Stucky grab a drink at the local bar where they talk about Steve being Captain America and get a visit form Peggy Carter.

Stucky fighting crime is never a bad thing. What makes these scenes so great is that, unlike the rest of the soldiers and the US Army, Bucky isn't following Captain America, he's following his best friend Steve. (I'm not crying, you're crying.)

This one is tough to watch, but necessary because it shows just how deep the bond between Steve and Bucky really goes. They are both willing to die for each other, no questions asked, no hesitation. I won't even try to deny the tears right now.

The next time we see Stucky in action is in Captain America: The Winter Soldier, when Steve goes head-to-head with The Winter Soldier and recognizes him as his good friend Bucky. The moment Steve recognizes Bucky and realizes that Bucky doesn't remember him is so great. I dare you to watch this moment and not get all the feels.

8. Cap Vs. The Winter Soldier

In that same sequence, the fight scene between Cap and The Winter Soldier is a must see. It is, undoubtedly, one of the most charged fight sequences in the MCU. It's also just super cool and awesome.

The Winter Soldier is one of the most tragic heroes in the MCU, as shown when he confesses to his HYDRA captors that he recognized Steve. He's not sure how or why, but The Winter Soldier knows Captain America. What makes this moment so crucial to the Stucky relationship is how HYDRA reacts: by forcing The Winter Soldier to undergo a painful procedure to wipe his memories. Stucky's got a long way to go if they want to get back to their friendship days.

Speaking of feels, try watching the infamous "'Till The End Of The Line" scene, when Steve remembers how Bucky was there for him after his parents died.

...And try to contain your sobs when Steve recalls the moment during his fight with Winter Soldier.

The super short Ant-Man post-credits scene featuring Bucky, Steve and the Falcon is basically a lead up to Civil War, so you might want to revisit it before going to the movie theaters this weekend.

Only time will tell whether Stucky will survive Captain America: Civil War, but, whatever happens, we'll always have the memories.