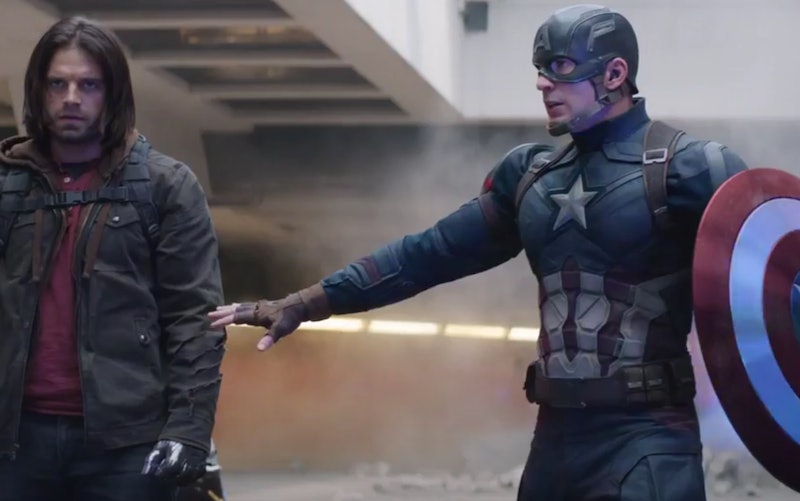 Captain America and The Winter Soldier, Steve Rogers and Bucky Barnes, the two best friends the Marvel Cinematic Universe has ever seen. There is a reason people ship Stucky so hard, guys, and that reason is the pure, beautiful friendship between Cap and his BFF, first established in Captain America: The First Avenger. The Stucky ship is strong, and it's about to get even stronger in Captain America: Civil War . In an interview with Empire , co-director Joe Russo called the movie a love story between Bucky and Steve, saying, "What's fascinating about the Cap-Bucky story as well is it's a love story." OK, so he was talking about a love story between "brothers," but the point remains that Stucky is the central relationship in Civil War. If you're not already a Stucky shipper, I've found the one Stucky scene you need to watch before Civil War to prepare you for all the feels.

The Stucky friendship is pretty idealistic in the first Captain America movie. Bucky was Steve's big brother best friend, one who shielded the then meek and weak Steve Rogers from bullies, who left him when he went to fight in WWII. They later traded places, with Cap saving Bucky in battle, and then Bucky "dying" to save Steve later. In The Winter Soldier, Bucky was revived as a brainwashed assassin, and, again, the Stucky relationship drove the film, as Cap had to deal with the reality of fighting his best friend to the death. And that battle to the death is the one Stucky scene any Marvel fan must see before Civil War.

In the final battle of The Winter Soldier, a newly re-brainwashed Winter Soldier is out to kill Captain America for Hydra, despite Cap's best attempts to remind him who he really is. The scene is crucial, as it explores the depth of the Stucky relationship while also demonstrating Bucky's evolution since The First Avenger. Steve sees the Winter Soldier as his friend Bucky, but Bucky doesn't remember Steve and knows him only as a mission — a target he has been ordered to eliminate. If you wondered just how deep Steve's love of Bucky goes, then this scene is your answer. Cap doesn't just want his friend back, he'd rather die than accept the fact that Bucky isn't himself anymore. As their brotherly saying goes, "I'm with you 'til the end of the line." Sobbing yet?

As for the Winter Soldier, the fact that he refrains from killing Steve (and saves him from drowning) is an indicator as to what's to come from his character in Civil War. He's not totally free from his brainwashing, but there is something in him that remembers being Bucky Barnes, and that will certainly come into play for Team Cap in Civil War . "Philosophical questions that we would want to deal with would be, you know, is he redeemable? ...If he doesn't regain his memories, can you call him Bucky Barnes, or is he somebody new?" the Russo brothers told Collider.

No matter what side you're on in Civil War, I think we can all agree to be on Team Stucky.