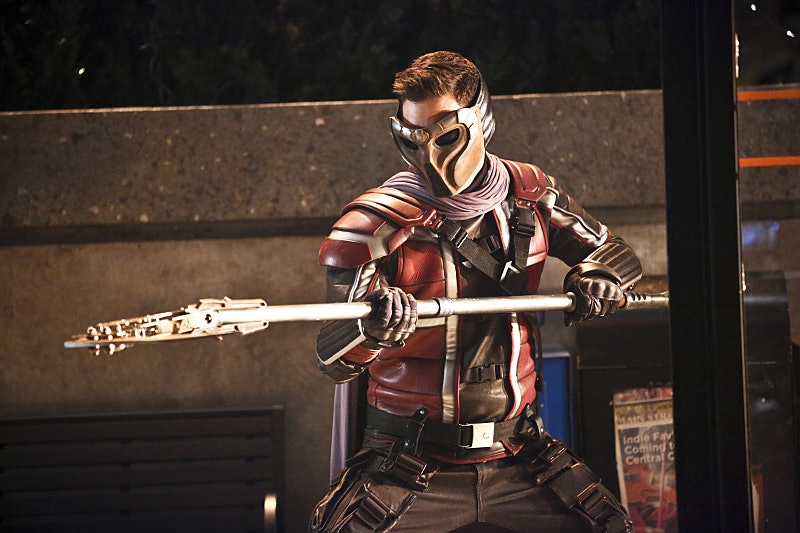 Watching everyone on The Flash meet their counterparts from Earth-2 has been fun this season, but Tuesday's episode is offering yet another twist. Who is Rupture on The Flash ? The villain of the week, who arrives with Zoom and Caitlin, has an unexpected connection to Cisco.

According to the official CW description for Tuesday's episode, "...Cisco is shocked when he vibes the Earth-2 villain Rupture, who happens to be his brother Dante's doppleganger. Rupture came to this Earth seeking justice for Reverb's death."

In DC Comics, Rupture is a third Ramon brother named Armando. However, since we've already established that Cisco has a tenuous relationship with Dante this is a much smarter choice for the CW series. The conflict is already there! On Cisco's Earth, his brother is more accomplished in their parent's eyes. Dante has developed a bit of guilt/imposter syndrome as a result of his parents' (possibly undeserving) praise. All in all, the two brothers don't really get along.

Rupture has inter-dimensional abilities, but he also carries a super-powered scythe. It's not everyday that a villain on The Flash uses their powers in addition to technology. As we've seen with Captain Cold and most metahumans, the baddies technically tend to favor one over the other. By the looks of the promotional photo above, this weapon is making its way onto the small screen as well.

So, not only is it going to be hard for Cisco to meet a super-villain version of Dante — but the fact that Rupture cares enough about Reverb to avenge his death is going to hit a completely different set of feels. I wonder what the Ramon brothers were like on Earth-2? I'm still curious about Killer Frost's dead brother Charlie — don't you think that's coming back at some point? The alternative universes have tested relationships in every conceivable way on The Flash. Whatever the bond between Reverb and Rupture is, it's not going to be fun for Cisco.