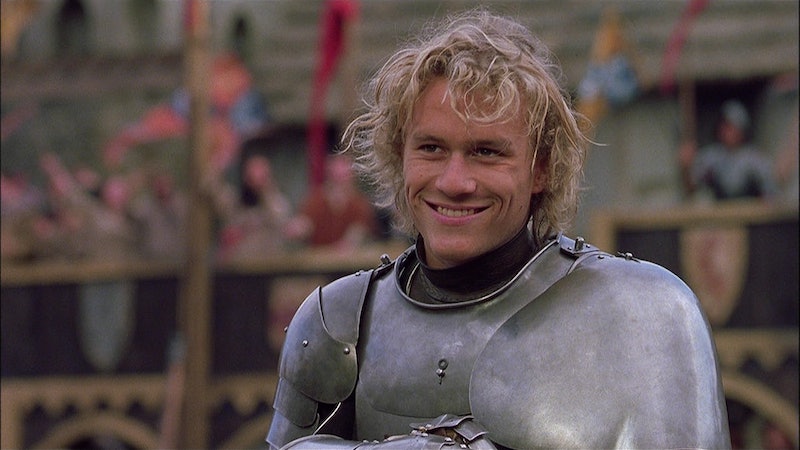 Truth be told, I wasn’t the biggest fan of the movie A Knight’s Tale when it first came out. Sounded too Robin Hood-esque for me, with the medieval jousting and knights and kings and — whatever. Well, I was wrong — A Knight’s Tale is, in my opinion, one of Heath Ledger’s breakout roles (the other being his turn as Patrick in 10 Things I Hate About You), and it has something for everyone — action, romance, drama, intrigue.

But first things first — if you’ve never seen A Knight’s Tale, why? I kid. If you’ve never feasted your eyes upon a jousting Heath Ledger, here’s a brief synopsis. Ledger is William Thatcher, who wears his dead master’s armor to impersonate him in a jousting competition. He wins, and, thirsty for more cash and prizes, he grabs a noble name (because only nobles could compete in the jousting) and keeps on competing. William meets fair maiden Jocelyn, he gets injured competing against Count Adhemar, who also loves Jocelyn, and eventually, Williams wins it all — including the girl. There’s plenty of comedy in the film, as well as a young Geoffrey Chaucer.

Yes, I said Geoffrey Chaucer. You should recognize that name from your high school English class, as Chaucer wrote one of the most important Middle English tales in the history of the written word — The Canterbury Tales. Racy and pretty irreverent for the time, the work is a collection of stories told by a group of pilgrims migrating to a sacred space. There are 24 stories in the collection (and it was unfinished at Chaucer’s death), and the first book of The Canterbury Tales is actually called “The Knight’s Tale.” And you thought that sleeping through AP English would help you in the real world.

In honor of the fifteenth anniversary of A Knight’s Tale, here are a few facts about the film that the history buffs are sure to love.

1. The Knights Were Real

So no, Heath Ledger was not actually a knight during medieval times, but his character Sir Ulrich von Lichenstein is a real person. He was a knight and an author that was thought to have invented the idea of chivalry and courtly love. I’m not really sure if we should thank him for that, but, whatever. Anyway, nobleman Piers Courtenay was descended from Edward I, and Lord Roger Mortimer was hanged, drawn, and quartered in the town square because he had an affair with Isabella of France. (She was married to Edward II at the time, which is considered uncool.)

2. There Are So Many Chaucer Easter Eggs

Paul Bettany’s Chaucer threatens to put the summoner and the pardoner in his literature in A Knight’s Tale, and the real Chaucer did just that. “The Summoner’s Tale” and “The Pardoner’s Tale” feature both characters as gross, corrupt people, so I guess that Chaucer made good on his promise.

Most of Geoffrey Chaucer’s life is well documented (all the man did was write, so it wasn’t hard to know where he was), but there’s a year or so during which historians have no idea what Chaucer was doing. A Knight’s Tale is said to be what happened during that year.

4. There Are A Ton Of Beatles References

Not everything in the film has to relate back to medieval times. In the film, Wat tells Chaucer that if he betrays them, Wat will beat Chaucer until “your insides are out and your outsides are in.” This is a line from “Everybody’s Got Something to Hide Except Me and My Monkey” from the White Album. During Chaucer’s first introduction of Sir Ulrich, he includes the lower classes in the festivities, saying, “And everyone else not here sitting on a cushion.” When The Beatles played the Royal Command in 1963, John Lennon introduced the last song by acknowledging the people in the cheap seats and telling the upper classes in the better seats to just “rattle their f—n’ jewelry.” People were scandalized because he dropped an F-bomb in front of the Queen.

I bet you didn't know history could be so interesting! Though watching Heath Ledger and Shannyn Sossamon romance is certainly interesting, too.