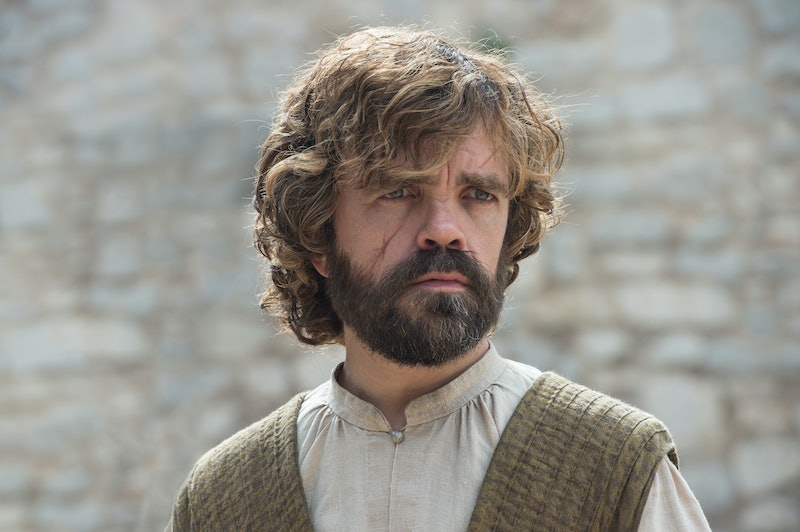 Though the moment was somewhat overshadowed by a certain long-awaited resurrection, Tyrion did something pretty extraordinary in "Home:" He unchained two dragons... and lived to tell the tale. Thrones fans have long questioned Tyrion's true parentage — was his dragon taming another clue that he's part Targaryen? Who is Tyrion's real father?

Now, his newfound affinity with the dragons may have majorly rekindled the theorizing, but the Aerys Targaryen rumors have been around for years now. It's not as near-canon as the infamous R+L=J theory, but its got its fair share of supporters... not to mention evidence. Perhaps most glaringly, there's the fact that Tywin often denied the fact that Tyrion was his son (perhaps most notably after Tyrion shot him in the stomach with a crossbow). I think most of us chalked up all the paternity denial to prejudice and spite — after all, as Tyrion himself famously said, "All dwarves are bastards in their father's eyes." Could there be something more to all those cutting remarks, though? In the books, Tyrion is described as having blonder hair than his brother and sister, which could be a nod to the trademark Targaryen platinum locks.

Plus, the books mention that Aerys was always interested in Tywin's wife, Joanna Lannister: In A Dance With Dragons, Ser Barristan Selmy notes to Daenerys that he overheard Aerys joking about "right to the first night" with Joanna, aka a lord's "privilege" to sleep with his vassal's maiden wife on their wedding night. It's also mentioned in The World of Ice and Fire that Aerys took "liberties" with Joanna during the bedding ceremony, after which she was dismissed from Queen Rhaella's services as a lady-in-waiting, and left King's Landing for Casterly Rock. As you might expect, there's no evidence that she returned his interest — but it's mentioned several times that Aerys was a pretty horrible husband (Rhaella was often spotted with human-looking bite and scratch marks on her thighs and breasts), so there's always the unsavory possibility that he forced himself on her — perhaps even multiple times — which could make Tyrion their illegitimate son. There's also the small detail that Joanna made a rare visit to King's Landing for a tourney a little less than a year before Tyrion was born — make of that what you will.

Part of the reason this Targaryen paternity theory is so popular is because, in addition to giving fan favorite Tyrion a real claim to the Iron Throne, it ties in perfectly with the three dragon riders theory. This theory has its roots in Daenerys' visions in the House of the Undying, where her brother Rhaegar tells her of a dragon with three heads. Most interpret this vision to mean that A Song of Ice and Fire will feature three dragon riders — Daenerys is basically a sure bet for Dragon Rider #1, but what about the other two? Many think Jon Snow — or rather, Jon Targaryen, as next week's Tower of Joy flashback may well reveal — will be the second, and some posit that Tyrion will be the third.

Secret Targaryen heritage would make him a prime dragon rider candidate — and the fact that Viserion and Rhaegal didn't burn him to a crisp (the way the trailer had us believing) serves as another pretty good hint. The speech Tyrion gave in the episode about his longstanding affinity for dragons is also telling — in the books, it's established that Targaryens have "dragon dreams," and this could be a clue that Tyrion may have had them too (in the books, he recollects his dreams of riding dragons).

It's also worth noting that in A Dance With Dragons, one of Dany's many suitors, Quentyn Martell, sees her riding Drogon, and figures his (diluted) Targaryen blood will render him similar benefits — not so, though: Poor guy gets burned to a crisp almost immediately. Quentyn isn't a character on the show, but it's still worth using him as a point of juxtaposition against Tyrion's much more successful interaction with the two dragons. If you take the fate of poor Quentyn into account, it makes Tyrion's triumph even more notable — why didn't Viserion and Rhaegal go all dracarys on him, like they did with Quentyn?

Tyrion's dragon whispering skills may just come down to more than his special knack for "knowing things" and sweet talking — it might be our first confirmation that one of ASOIAF's most well-loved theories is true.