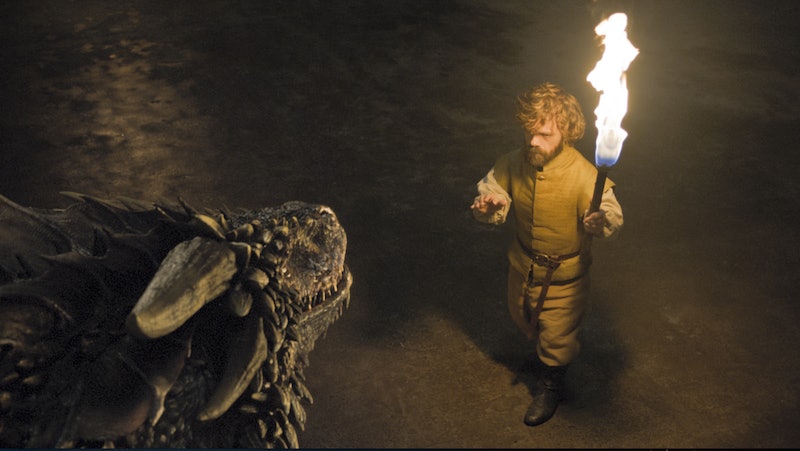 If Game of Thrones fan theorists are to be believed, we've got three Targaryens ready and waiting to take up the throne: Daenerys, Jon Snow (see: R+L=J), and Tyrion Lannister. Sure, we'd all like to believe that these three are going to all team up and take over the kingdoms together — because let's be real, how cool would that be. But where did this awesome yet insane theory even come from? How can Tyrion be a Targaryen on Game of Thrones ?

The basis of Tyrion's alleged alternate parentage comes from the Song of Ice and Fire books, naturally, but I'll get into those tiny details in a bit. The HBO series proper just dropped a big clue about where Tyrion may have really came from. In Episode 2 of Season 6, "Home," Tyrion becomes one of the first people besides Dany to be able to communicate with and calm down the dragons. Is this just because Tyrion "drinks and knows things" (like, perhaps, how to tame dragons), or is it because he is in fact born to be a dragon rider? It's kinda crazy to me that nobody tried before to simply talk to the dragons in a pleasant tone — they really are just like big cats — but this scene is obviously pretty important.

Feline tendencies and Tyrion's potential new Dragon Whisperer series on Animal Planet aside, there are some interesting details from the book series that explain why some fans think he's the offspring of the Mad King Aerys Targaryen and Tyrion's mother, Joanna Lannister.

1. The Mad King "Lusted" After Joanna

According to a story Barristan Selmy told Daenerys in A Dance with Dragons, Aerys had a thing for Joanna, and when she married her cousin Tywin (does incest run in the family or something?), he spent most of the wedding getting wasted. Aerys also made a comment that "it was a great pity that the lord's right to the first night had been abolished." Yikes.

2. Joanna Was Rumored To Be Aerys' Former Mistress

Also from A Dance with Dragons, this was just some town gossip around King's Landing — you know, just like that baseless gossip that Jaime is the father of all three of Cersei's children. In the book, Maester Pycelle makes the argument that Tywin was "proud man and not one accustomed to feasting on another man's leavings." But Tywin would also do anything for his family, and supposedly really loved Joanna, so ... who knows?

3. The Timing Could Be Just Right

In The World of Ice and Fire, George R.R. Martin shares that Joanna attended a tourney in King's Landing in 272 AC. During the tourney, Aerys insulted Joanna's post-baby breasts, which is really not cool, dude. That night, Tywin tried to resign as Hand of the King (because Aerys slept with his wife, perhaps?) and was denied. A little less than a year later, a bouncing baby Tyrion popped onto the scene.

I get that Westeros isn't the most open place for people who are different, but the hatred Tywin harbored for his son was unreal. And yeah, the GoT world is kinda like our Middle Ages, so everyone believes it's Tyrion's fault his mother died birthing him, but is that reason for Tywin to never accept his son, even a little bit? Or is the reason that Tyrion's not really his son? When Tyrion goes all patricide-y on Tywin, the patriarch's last words are, "You're no son of mine" — could that have been more than just a final insult?

5. Tywin Refuses Tyrion The Right To Own Land

Tywin never gives his son any property, even though Tyrion proved himself with that water-management thing when he was Hand of the King. Tywin says in A Storm of Swords, "Men’s laws give you the right to bear my name and display my colors, since I cannot prove that you are not mine." Woah. How messed up (and fitting) would it be for crazy and vindictive Aerys to make it so that Tywin's firstborn was part of his Kingsguard and thus couldn't own land, and so that the only heir who could take Casterly Rock would be Aerys' bastard. No wonder that guy got king-slayed.

6. Tyrion's Got A More Targaryen-ish Appearance In The Books

In the first book, A Game of Thrones, Tyrion is described as having a mixture of hair that is "so blonde it seemed white" and black hair. Super blond hair? That's a Targaryen thing. He also has one green eye and one blue, and while the green is a Lannister trait, blue is way more Targaryen. Meanwhile, in the series, there is an ancestral character mentioned named Shiera Seastar, who was a Targaryen bastard and also had the mismatched eye thing. Is history repeating itself?

7. Tyrion Has Always Had A Connection To Dragons

If your heart didn't melt when he was talking to the dragons about his childhood love of dragons, you seriously need to seek some therapy. Tyrion's always been thinking about dragons — he's practically obsessed with them. Is this perhaps a trait that's in his blood?

Only time will tell if three of our favorite GoT characters are actually Targaryen half-siblings/cousins and whatnot. But all this evidence kinda makes it seem a little more likely. I can't wait until the episode when we get to see Jon, Dany, and Tyrion dragon-riding together and breaking the wheel of Westeros — that is, if all these theories are correct.