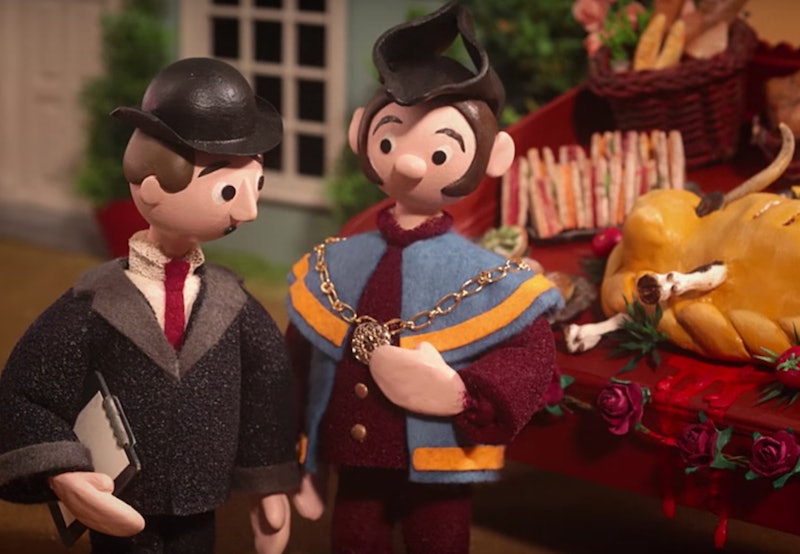 Radiohead has un-disappeared completely. After a temporary e-hiatus, the alt-rock stalwarts have returned to the internet with a new song and video. Tuesday, Radiohead dropped the rich and frenetic record “Burn The Witch,” the stunner of a first single from their to-be-released ninth studio album. While the track is a sweet and melodic tune that builds fluidly to a string-driven crescendo, whereas its lyrics are the opposite of sweet. Much like Radiohead classics “Climbing Up The Walls” and “Kid A,” the lyrics to “Burn The Witch” pack a creepy punch. So, what is Radiohead’s “Burn The Witch” about? The short answer: conformity.

Now, if you think the song can’t be as unsettling as the video, then you have another think coming. Please consider the first verse:

And then tack on the pre-chorus:

What's the song on the jukebox, you ask? I'll give you a hint: It's not "Don't Stop Believin'." Why don't we let the chorus take it from here:

Perturbed yet? If not, please consider the second verse and get back to me:

The themes of groupthink, witch hunts, and mob mentality course through the veins of "Burn The Witch"; If you dare to threaten the status quo, and you may find yourself locked up in the stomach of a flammable effigy.

Just when I thought I couldn't be more stoked to hear the followup album to 2011's The King of Limbs, they go and hit us with "Burn The Witch." What a gift to all of our ears. Man, I've missed Radiohead.

More like this
'Traumazine' Has Megan Thee Stallion Twitter Dancing Through Their Feelings
By Grace Wehniainen
Twitter Is Losing It Over Beyoncé's "ALIEN SUPERSTAR" & These Memes Prove It
By Radhika Menon
The Real Meaning Behind Marcus Mumford’s “Cannibal” Is Actually Really Dark
By El Hunt
The Controversy Around Beyoncé's “ENERGY”, Explained
By Frances Stewart
Get Even More From Bustle — Sign Up For The Newsletter