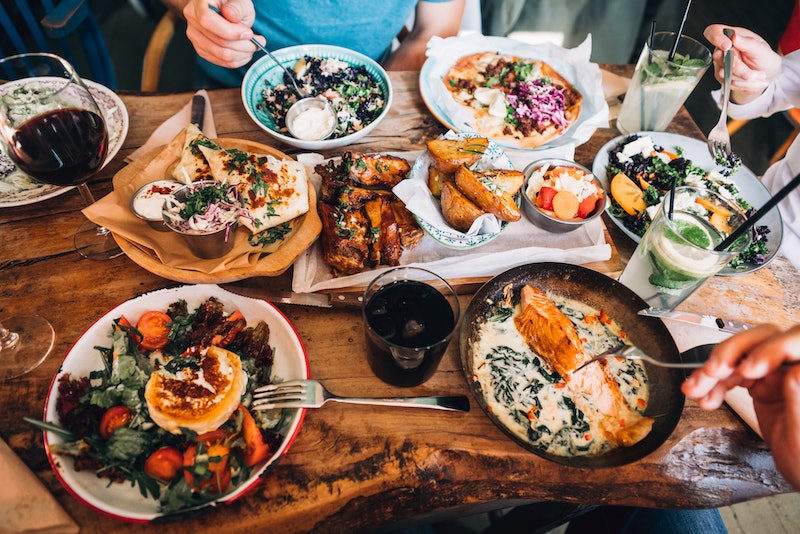 Eating in the United States can be by turns amazing and horrifying — and these facts about American eating habits prove it. This is a country where you can buy a delicious pizza delivered in a box made of pizza or celebrate fall with a pumpkin spice latte each year, after all; at the same time, however, you also have to factor in a culture that often places more weight on convenience than health.

In Devoured: From Chicken Wings to Kale Smoothies—How What We Eat Defines Who We Are, food writer Sophie Egan puts American eating habits under the microscope, examining how we eat and why. Using relatable examples, anecdotes, and convincing research, she highlights what characterizes our country’s approach to food and makes it unique. Egan manages to do so without passing moral judgment, making her work accessible to everyone, from highly conscious eaters to those who prize taste above all else.

Devoured points out the good, the bad, and the downright bizarre. Along the way, Egan also underlines realities that somehow manage to be surprising yet not at all. Below are 10 facts that probably should be astonishing based on how extreme they seem; yet given our everyday experiences with food in the United States, they just, well, aren’t.

1. Meals At Desks Are Part Of 40 Percent Of Americans’ Lives

Lunch is supposed to be a break from work, but for 40 percent of us, it’s actually a time to fit in still more work. Can’t stop, won’t stop.

“Americans spend less time cooking than people in any of the OECD nations,” writes Egan, referencing the 34 countries that make up the Organisation for Economic Co-operation and Development. We eat out so much and buy so many prepared options that we don’t spend much time at all slaving in the kitchen.

3. A Large Majority Of Americans Live Within 20 Miles Of A Starbucks

Coming from Washington state — the birthplace of Starbucks — I expect to see the coffee shop on almost every street corner. Nonetheless, the fact that 80 percent of us live within 20 miles of a Starbucks is pretty insane. There are these crazy things called coffee makers, after all.

4. Many Americans Like Eating With Their Phone As Company

Eating with someone else is all well and good, but it’s not the only option. “Surveys show that 43 percent of Americans enjoy eating alone as a way to catch up on other activities like social media, TV, and reading,” writes Egan. Apparently, our phones have become pocket-sized friends.

It’s gotten easier to go gluten-free, and about 33 percent of us are either actively avoiding gluten or at least attempting to do so. Americans are all about alternatives with ingredients removed.

6. Eating Breakfast Every Day Is Rare

Breakfast may be the most important meal of the day, but most of us aren’t actually making time for it every morning. “Just 26 percent of us eat breakfast every day,” writes Egan.

7. Fast Food Is On The Menu At Least Once A Week For Half Of Americans

Even though fast food has come under fire in recent decades, plenty of Americans are still indulging in it on a regular basis. It’s hard to say no to convenience.

8. More Americans Call In Sick After The Super Bowl Than Any Other Day Of The Year

In case there was any doubt about how much Americans love the Super Bowl, this will erase it: One in 16 Americans ends up calling in sick the day after the big game. Blame the wings and beer, I guess?

What’s a Super Bowl without chicken wings? Nearly 80 percent of American adults self-identify as “a person who eats chicken wings,” according to Egan. The appetizer has become the country’s favorite food for the annual event.

10. A Majority Of Americans Are Now Eating More Kinds Of Food From Around The World

Those of us living stateside are increasingly lucky enough to get to enjoy cuisine from around the globe. Egan shares that two-thirds of people in the United States are eating a greater variety than they were five years ago. Globalization does have some perks.