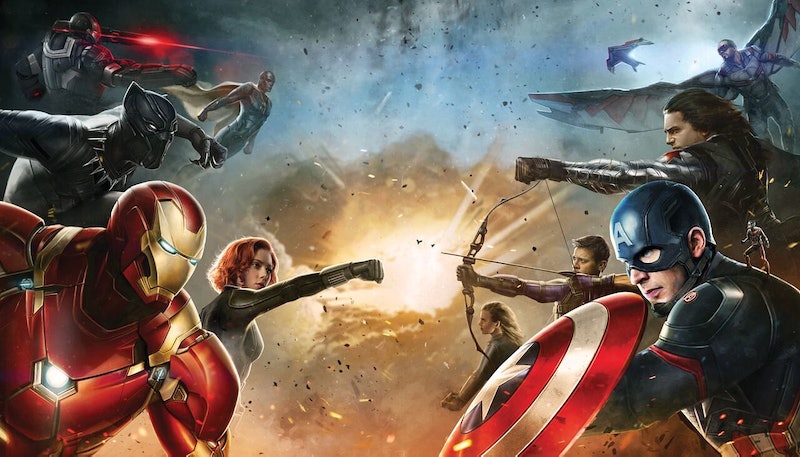 I hate to be the one to break this to you, but the Avengers are in a bit of a tiff. Captain America: Civil War is going to be a rough two and half hours for those who prefer it when everyone just gets along. But conflict occurs in every family, even the superhero kind. How could this possibly happen to a team of Earth defenders who've fought next to each other in the most epic battles in human history? Well, the source of the dispute is as terrestrial and mundane as you can get. It's paperwork. Yes, for those wondering what the Sokovia Accords are — the political document you've probably been hearing a whole lot about — I have your answer. The Accords instigate the divide between the Avengers factions, and it's enforced by an international committee looking to exert some control over these Marvel heroes.

If you're reading this article, you must remember the doomed country of Sokovia. In Avengers: Age Of Ultron, HYDRA is doing some of its characteristically evil work out of the fictional Eastern European nation. The team is at odds at first with two of the results of HYDRA's genetic experiments: the Maximoff twins, Pietro and Wanda. They come around to the right side when they're let in on Ultron's ultimate goal, the complete eradication of humans. Sokovia doesn't exactly benefit from having the Avengers in town, even though humanity is saved. It's subjected to much CGI death and destruction, culminating in the country's capital being lifted into the stratosphere and then demolished. I'm going to go out on a limb here and say that Tony, Steve, Natasha, Bruce, and the rest of the gang aren't going to be invited back.

The Battle Of Sokovia prompted action by world leaders. Those leaders were responding to civilian worries about super-humans and the free reign they seem to have. As a member of the audience of these movies, you're on the Avengers side. You're privy to conversations that reveal their good intentions. But if you put yourselves in the shoes of an average person watching the devastation of New York City on the news or worse, a Sokovian watching their home be destroyed, you can see where this fear is coming from and maybe even respect it.

The Sokovia Accords are a multinational push for regulations to be established and enforced for superheroes and their missions. The man taking lead on the act is a familiar name to Marvel fans. Former Army General Thaddeus Ross hunted Bruce Banner down in The Incredible Hulk. Now he's the U.S. Secretary Of State and intent on putting a leash on "enhanced individuals." He's got the backing of the United Nations on the Sokovia Accords, and that's a hard body to argue with.

And that's where the line is drawn. Steve and his team are wary of the kind of oversight that the Accords prescribe. Tony and friends think that a little bureaucracy really couldn't hurt. Who's right and who's wrong? This is international policy in a reality where gods and aliens could come attack the Earth at any time, and the answer is not going to be that simple.