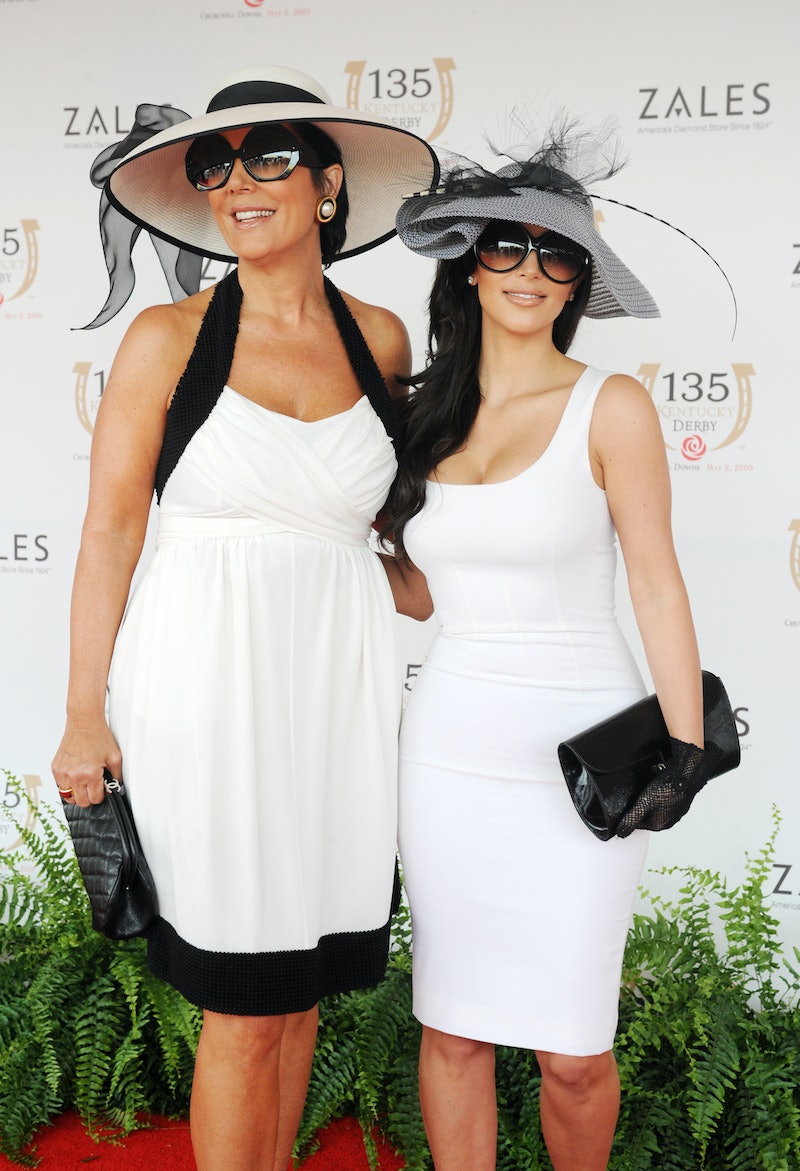 It's the most wonderful time of the year, ladies and gentlemen, when sports fans, horse lovers, and crazy hat aficionados join forces on one exciting day to watch the fastest two minutes in sports. Yep, it's the Kentucky Derby, always held on the first Saturday in May, and it's a sight to be seen. Of course, the event is technically about the actual horse race, but let's be real, it's also so much fun to watch the entire spectacle of it all. The colorful dresses! The exciting parties! Those massive hats. Like any other widely publicized event, the Kentucky Derby attracts hordes of random celebrities that will have you wondering why, exactly, they're there.

There's no secret, really — celebrities love a hip and happenin' event, and the Kentucky Derby is a particularly glamorous one. The chance to party in your Sunday best on a Saturday, mint julep in hand, in the springtime sun does sound totally appealing. But since most of us normals will never get the chance to attend the elite Kentucky Derby parties, I'm totally giving you permission to live vicariously through these photos of random celebs in completely ridiculous outfits, from pastel plaid tuxes to hats with feathers.

Kardashian and her momager attended the spectacle in 2009, which actually shouldn't be too surprising because if there's a celebrity-studded party somewhere in the world, a Kardashian will be there.

Hat game on point, but would you expect any less from the fashion mogul?

The girls next door left the Playboy Mansion to travel to Kentucky in their pastel-colored best.

This photo of two former Olympic ice skaters and the Lacheys with their kooky hats (Nick, where's your hat?) is something that could only happen at the Kentucky Derby, I reckon.

This outfit. I have no words. Apparently, Fatone is a staple at the celebrations each year — and he's always clad in outfits right out of a '50s musical.

Though he's since attended the Derby numerous times with now-wife Vanessa Lachey, once upon a time in 2004, Lachey's date was ex-wife Jessica Simpson, bringing me all the early '00s nostalgia feels. Also, that hat was an A+ choice, girl. Lachey seems anti-hat, for some reason, which is a bummer.

The country darling is a frequent and enthusiastic guest at Derby celebrations, which makes total sense given that she's an equestrian herself — she owns three horses and a plethora of other farm animals of her own. Lambert recently told Horse Channel, "When I'm riding, it clears my head and I'm able to write better music. I love being outside. It's always good to get away from the computer and cell phone and just enjoy being with my horses."

Talk about a throwback... remember the controversial co-host of The View? Turns out, she's a huge fan of the Kentucky Derby. She's spotted there year after year.

The R&B crooner stepped out in a Derby-approved look in 2006.

The actor looked dapper in his newsboy cap in 2012.

Grenier appeared sans-Entourage but cozied up to then-girlfriend Isabel Lucas in 2008.

No one loves a good party more than Diddy, so it's not a shocker that he'd flock to Kentucky to roll with fellow ballers.

In 2007, Hart joined the crowds for a red carpet photo op on race day.

The singer worked a head-to-toe red look, and I'm digging it.

Not sure if these guys planned to color-coordinate so well, but if so, I applaud their efforts.

Ashlee wasn't the only Simpson down for the Derby, bringing ex-husband Wentz as her date in 2010.

Goodwin gets points for matching her hat and her eye shadow to her dress.

The Royals are no strangers to a crazy hat situation and a jovial sporting event, so it shouldn't come as much of a surprise that the Queen wanted to join in on the festivities in 2007.

The former couple brought out their finest "funeral or Derby?" attire for the 2009 celebration.

The country singer donned her best large bonnet for the occasion in 2009.

The actor/host shared a moment with his now-wife Courtney in 2010.

The former spouses attended the Derby a few times together before their divorce in 2006.

Usher was ready to party during the 2005 races.

Naturally, the model stunned in her Derby best.

Patton looked pleased as punch to wear her oversized hat in 2011.

The TV host opted for an Alice in Wonderland-themed getup, and I love it.

The E! couple made a picture perfect pair in 2012.

The two ladies shared a secret on the red carpet... was it about where they stashed their big hats?

Gosselin rocked a Victorian-style hat in 2011, feathers and all.

What I wouldn't give to be a fly on the wall during this photo op.

I think it's safe to say that the Kentucky Derby brings out a pretty vast assortment of celebrity spectators looking for a good time, and I'm a bit jealous. I wonder who will make an appearance at this year's festivities.

More like this
Prince William Reveals Charlotte's Hidden Talent In Ultimate Proud Dad Moment
By El Hunt
The Nike & Jacquemus Collab May Have Been Inspired By Princess Diana
By Frances Stewart
The 10 Best Longline Sports Bras, According To Reviewers
By Danielle Calma
5 Best Buys From The 'Euphoria'-Approved ASOS x Adidas Collab
By El Hunt and Bustle Editors
Get Even More From Bustle — Sign Up For The Newsletter