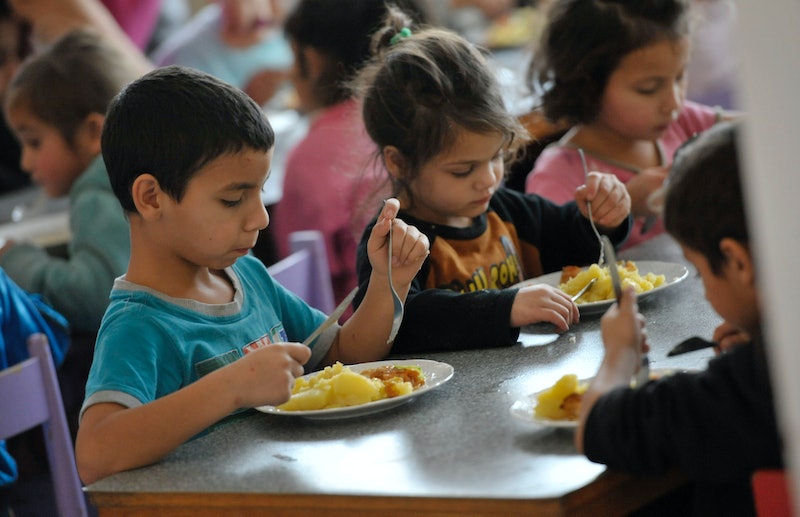 Turns out gossiping isn't just for grown-ups anymore (not that it ever really was): A new study says that prosocial gossiping starts as early as five years old — but for a very good reason: Preschoolers use gossip to help each other avoid cheaters. Apparently even babies understand the importance of looking out for each other, making this kind of gossiping weirdly encouraging.

Despite the negative connotations, gossip actually serves important social functions. Although there are some forms of gossip that are more negative, a lot of gossip is what psychologists categorize as "prosocial" behavior — meaning behavior intended to benefit other people. Prosocial gossiping means things like warning others about potentially bad people; it also helps relieve stress, promote generosity, and prevent exploitation, studies have found. And despite the stereotype that gossip is something women do, research also shows that gossip is something both men and women do pretty frequently. Along with, it seems, children.

"So far there has been little scientific evidence for gossiping in children younger than 10 years old which we found surprising because preschoolers make reputational judgements in many situations," Esther Herrmann, one of the study's authors, told MedicalXpress. So she and her fellow researchers decided to look into it themselves.

In the new study, children between the ages of 3 and 5 played a sharing game with two puppets. One of the puppets played by the rules, but the other cheated — sometimes it gave the child too few tokens, other times too many. After playing the game, the puppets left and researchers brought a second child of roughly the same age into the room, observing what the children said to one another while they were alone. They found that 54 percent of the 5 year olds who played with the puppet would tell the new child which puppet to avoid, and that children shared this information even if they benefited from the puppet's cheating. Because someone willing to cheat is always someone to watch out for, I guess.

Interestingly, researchers found that younger children were less likely to share this information. Only 23 percent of 3 year olds in the study told the second child about the cheating puppet, which suggests that this behavior might be learned, or at least something that people need to hit a certain level of development in order to engage in. Or maybe children need to be around a large number of other kids on a regular basis — which tends to happen when kids start school or preschool around the age of five — in order for this behavior to really click.

Regardless, it seems clear that gossip is something natural for kids, and for humans in general. Which makes sense. After all, there are a lot of benefits to gossip, not only for individuals, but for promoting healthy group dynamics. And since humans are so interdependent on one another, it's probably a good thing that this behavior kicks in early.

More like this
The Best Time To Date After A Breakup, According To Experts
By Bustle Editors
Why Experts Say Sleeping With A Fan On Isn’t Totally Risk-Free
By Sophie McEvoy
You Probably Didn't Realize These Expensive Mistakes Around The House Are Actually Easy To Avoid
By Mackenzie Edwards
20 Things You Should Never Tolerate In A Relationship
By Rachel Sanoff and Kathleen Ferraro
Get Even More From Bustle — Sign Up For The Newsletter