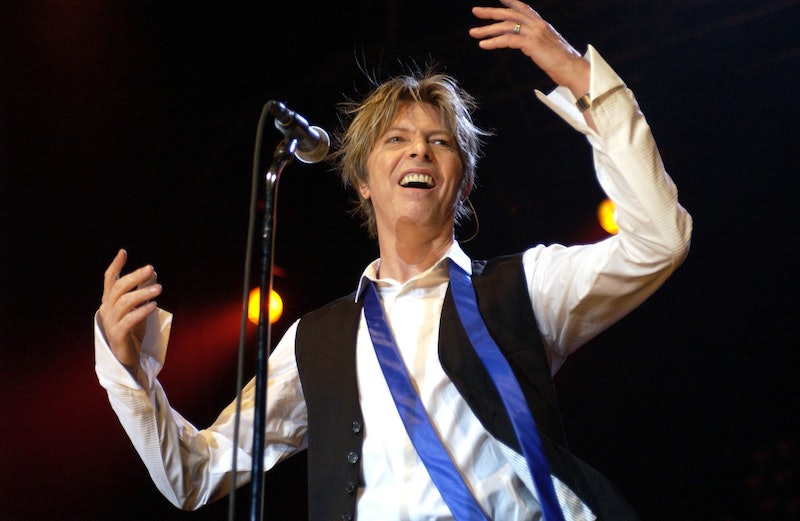 If, like me, you're still a little too heartbroken from the saddening shock of David Bowie's death to listen to his final album, Blackstar, without choking up, then you might find solace in what a fan has discovered hidden in the gatefold sleeve of its vinyl release. Shared on Imgur and Reddit by BoldlyGettingThere, an image appears to show a field of stars glimmering within the sleeve when the artwork is exposed to sunlight. This incredibly sweet hidden secret within the Blackstar artwork is a beyond beautiful, fitting, and even magical tribute.

Discussing the image on Reddit, user Telldrak went into quite a bit of depth in trying to figure out exactly what was going on with the hidden galaxy within the sleeve, coming to the following touching conclusion:

The paper backing on the reverse side of the starfield print is different from the rest of the packaging. Rather than using the heavier stock paper, they've used a much thinner paper, which is in fact, capable of transmitting light.

The picture OP posted is cropped, but still shows that the gatefold is open, and that there's a bright light behind the cover.

This is not burn-in or any sort of chemical change at all. Is it intentional in the design of the album? I'd wager it is, since this thinner paper is not used anywhere else in the cover or liner notes, nor does it seem to serve a purpose in protecting the record, which comes in a thicker translucent plastic sleeve.

The discovery is absolutely stunning and also completely fits the persona of a man whose legacy will live long beyond his physical existence. While there are few hidden musical gems as touching as this one throughout history, there have been some which are just as cool. Here are some of the best.

You may well have noticed the crazy code scattered via misplaced capital letters in the lyric booklet to Swift's album 1989 — they weren't some accident. There's actually a number of secret phrases which appear when you connect those capital letters together, including DATE NICE BOYS, LIVE IN LOVE and GOD BLESS ANDREA SWIFT (oh, hey Taylor's mom!).

This one is just plain creepy. At 3:35 you can supposedly hear a voice whisper "If you hear whispering, you're dying". Yeah, nice one guys.

OK, this easter egg gets a little convoluted so I'm going to try and keep it as simple as possible. Essentially, In Rainbows was released 10 years after Ok Computer, on the 10th day of the 10th month (Oct. 10). The original title for OK Computer was Zeroes and Ones (i.e. 01, which is the reverse of 10, d'uh!), and apparently the two albums play in a seamlessly complementary manner to each other when you follow the first track of OK Computer with the first track of In Rainbows, the second track of Ok Computer with the second of In Rainbows and so forth, according to Diffuser.

Notice those weird noises in the background? That's "Am I Going Crazy" playing in reverse. So, essentially that means that if you were to play the song backwards that you would hear the song playing forwards in the background. It's a musical palindrome (and a pretty creepy one at that).

A secret pregap track which you used to only be able to access by pressing the rewind or back button on your CD player (but hey, now we have the internet), according to Cracked, "Ferocious Soul" responded to critics who accused Public Enemy of being "anti-black" for suggesting that gangster rap delivered negative messages.

Don't let the title scare you off because the German lyrics featured in this song apparently translate into a cookie recipe. I'm not joking.

So The Beatles are kind of notorious for having albums that fans speculate over for decades, but their finest (and definitely silliest) hour is the one at the very end of Sgt. Pepper's Lonely Hearts Club Band. In an interview Zane Lowe, Paul McCartney claimed that they had recorded a high-frequency note and added it into the album. Supposedly, the note wasn't audible to the human ear, though — it was only audible to dogs.

8. In Through The Out Door, Led Zeppelin

The mostly black and white artwork of this album might not seem like much, but actually, the artwork of original pressings of the album became permanently colourized when it came into contact with water, according to Zeppelin Collectibles.

The unpronounceable B-side track (known by fans as "Equation") to the single of "Windowlicker" is very creepy, even for Aphex Twin. At the 5:30 mark of this track you can hear a loud, disturbing buzzing noise. A fan who runs the blog bastwood discovered that when you run that section of the audio through a spectrograph (a program which converts sound waves into images) you get a seriously terrifying portrait of Richard D. James, aka Aphex Twin.

There's definitely a lesson to be learned here: don't accept music on a purely surface level, because your favourite musicians may well have hidden secrets within their music or artwork for you to find.