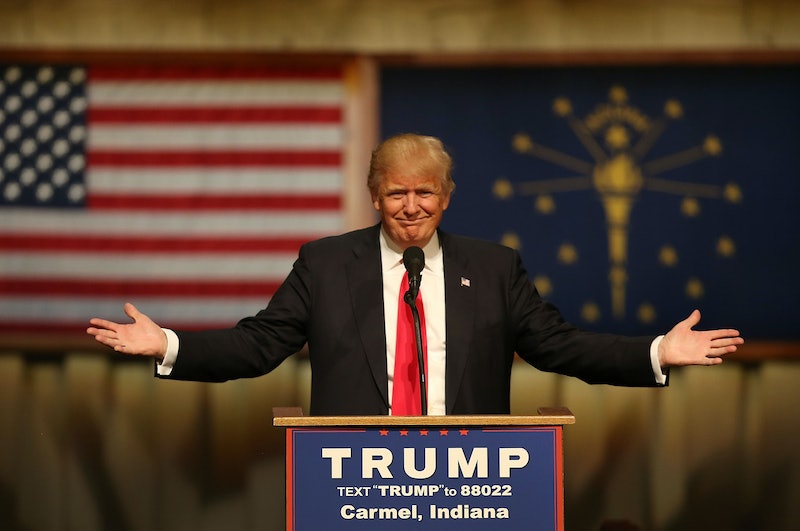 Many Republicans are wondering, now that Ted Cruz and John Kasich are out of the race, if anyone can run against Donald Trump. And I hate to break it to you guys, but you're officially out of options — at least when it comes to the GOP field. But before you get your hopes up that perhaps a third-party candidate will swoop in to save the day, you're out of luck on that, too. It's far too late for anyone new to make an even remotely successful run for president. So to the conservatives who are dismayed that Trump is now the "presumptive nominee" representing the GOP, you're down to one choice: supporting the Democrat who wins their nomination.

There have been calls for others to run for the candidacy (Paul Ryan, Mitt Romney, Michael Bloomberg, etc.), but it's simply too late for any of that. A successful presidential campaign requires time and money, neither of which are really immediately available at this point in the race. The Republican National Convention is in just two months, and that's not even close to enough time for a new person to enter the race, especially considering it'd have to be a write-in campaign, as ballots for the upcoming state primaries have been mostly set in stone.

In early April, The Atlantic wrote that there was enough time for a third-party campaign to take place, but that still likely wouldn't please conservatives, as a solid third-party candidate would only split votes between him or her and Donald Trump, paving an easy road for a Democrat to take the presidency. But could a candidate who has withdrawn from the race return, like Jeb Bush or Marco Rubio? It depends on whether they've dropped out entirely or only "suspended" their campaign, but because Trump already holds nearly 1,050 delegates of the 1,237 needed, it really doesn't matter. He's going to hit the amount of delegates needed to secure the nomination, and with polls asserting that Trump will win California, which has 172 delegates, there's a reason he's being called the presumptive nominee.

So while it might be concerning to you — and the more than 60 percent of people who have an unfavorable view of Trump — that Trump will most likely be the Republican nominee, there's really nothing that anyone can do about it now. Trump will be in the general election, and that's that.