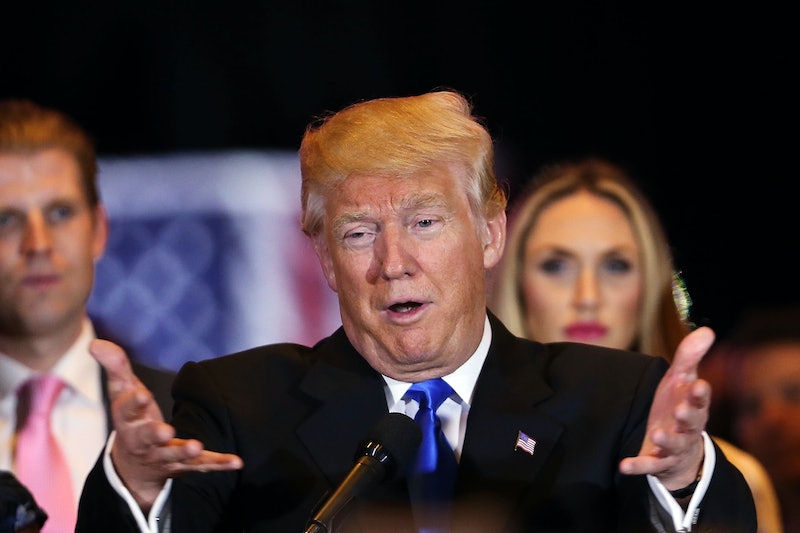 If you've turned on a news channel in the past 24 hours, you've probably figured out that egomaniac Donald Trump is the presumptive GOP nominee for president. In the space of 24 hours, after a landslide victory in a state that has never been thought to be particularly pivotal — Indiana, I'm looking at you — both of Trump's competitors, Ted Cruz and John Kasich, dropped out of the race (Kasich hasn't made an official statement, but NBC News and Fox News are reporting that his intention is to suspend his campaign). So what does "presumptive nominee" mean? When it comes to Donald Trump, nothing good.

In short, the term "presumptive nominee" comes from the term "presumption," aka presumably Donald Trump will be the nominee. Anything's possible, of course; the July GOP convention is still months away, and given that the RNC and much of the GOP elite has been opposed to Donald Trump from the beginning, it's not out of the question that Trump won't be crowned the GOP nominee for the November election.

It's just hard to see how he wouldn't be, given that he's the only person left in the GOP race. (In a press conference Tuesday, he described the whittling-down of 17 candidates to 1 as a "beautiful thing to watch.")

"Presumptive nominee," in other words, means "the person who's assumed to be the nominee" — and that, right now, is clearly Trump. Frankly, if we judge by polls alone, it's been Trump for some months now.

What "presumptive nominee" doesn't mean is the definitive nominee. Mitt Romney, for example, was the definitive nominee for president back in 2012, given that he was nominated by his delegates and gained the support of his party. John McCain was the nominee in 2008. Right now, ahead of the convention in July, Donald Trump, is nothing more than a billionaire who has gained more delegates than almost any political bystander thought could be possible, and therefore, according to the official selection rules, is likely to be the nominee.

In short? Yes, Donald Trump is the likely nominee. But this isn't like the term "president-elect," which refers to a person who will definitively be the president. "Presumptive nominee" is shorthand for "God knows, we can't see how this will play out any other way."