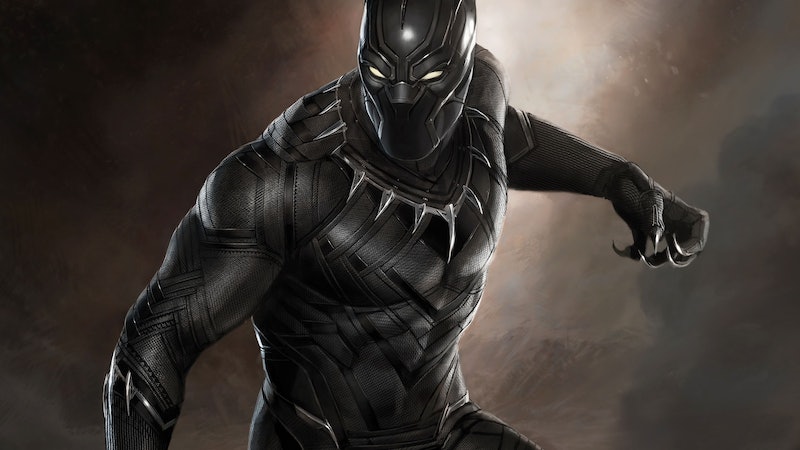 It's felt like an interminable wait, but Captain America: Civil War week is finally here. The next entry in the Marvel Cinematic Universe canon arrives on May 6, and with it comes some familiar faces. Audiences already know Team leaders Steve Rogers and Tony Stark, since they've both had their standalone outings and the ensemble flicks to establish their personalities and relationships, and they'll be joined by several of their regular associates (Black Widow, Falcon, Scarlet Witch, and so on) on either side of the Superhero Registration Act divide. Some new blood will be injected into the group dynamic, though, in the form of Chadwick Boseman as Marvel character Black Panther and his unmasked identity, T'Challa. And while it's unclear just yet if Black Panther is good or bad, it's clear that he's gonna be a big deal in the Marvel universe.

Black Panther is getting his own movie in 2018, so you might wonder if the studio will hold back the bulk of his origin story for that film. So why is T'Challa interested in the events of Civil War and what side will he fall on? Like many of the longstanding Avengers, Black Panther's motives are deeply personal here. Steering clear of spoilers, here's what the movie's promotional materials have let slip about Black Panther's involvement in Team Cap v. Team Iron Man. The trailer shows Black Panther putting a particular hurt on the Winter Soldier, otherwise known as Bucky Barnes, Steve Roger's childhood friend and greatest weakness. In fact, he doesn't seem to be interested in anyone else. What did Bucky ever do to T'Challa? There are some adaptable events in the character's comic origins where the Winter Soldier's actions could lead to Black Panther holding a personal grudge.

Before T'Challa was a superhero in the comics, he was already a powerful and influential person. He's a member of the royal family of the nation of Wakanda, a reclusive and well-guarded African country that also happens to kick every other country's ass in the realm of technology and engineering. Prince T'Challa is brilliant, well-schooled, and the heir to King T'Chaka. Thanks to a special herb, T'Challa also becomes exceptionally agile and strong, which allows him to assume the Black Panther title. Marvel just released a primer for the character to encourage fans to catch up and buy the books. It's definitely worth a watch if you're new to the Black Panther fandom.

Wakanda likes its privacy because the nation is home to so many minds and materials that its enemies would be only too willing to take. Vibranium (that handy material Steve's shield is constructed from) is possibly Wakanda's most valuable naturally occurring treasure. In the comics, that treasure is coveted by Ulysses Klaw, who showed up briefly to talk Vibranium in Avengers: Age Of Ultron. Intriguing, right?

In the above TV promo for Civil War, T'Challa is seen briefly, sans Black Panther uniform, standing in rubble that I am going to assume used to be a part of his home country. And now he's got a vendetta against Bucky Barnes. T'Challa must have reason to believe that the Winter Soldier is responsible for the attack. Though, the last audiences saw Bucky, he seemed to be coming back to himself and shaking off some of HYRDRA's brainwashing. Could Ulysses Klaw have framed him for the destruction of Wakanda? If so, T'Challa finding out and then going after the real perpetrator could be a great set-up for the Black Panther movie.

Is Black Panther a good guy or a bad guy? That question isn't really relevant in this movie, where individuals who have battled together as heroes can be suddenly at each other's throats over ideology. He has his reasons for coming after Bucky, and they seem stem from a protectiveness and love for his country and his people.