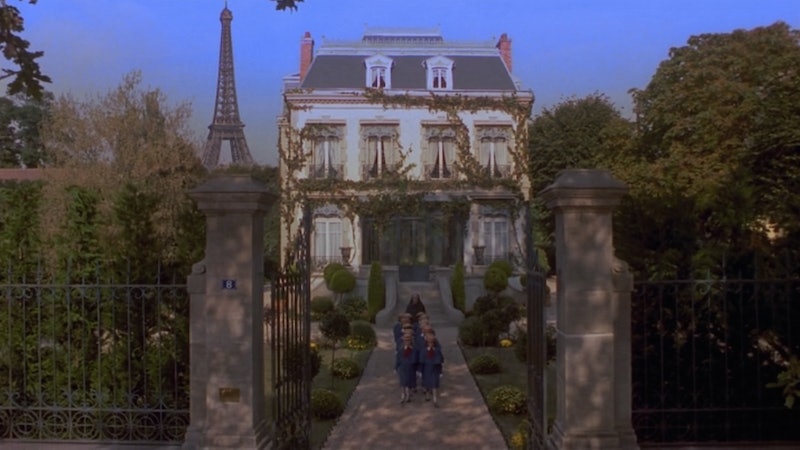 My earliest kindergarten memories involve learning how to read Ludwig Bemelmans' Madeline series. It wasn’t a trying task — incidentally, the books are only like nine sentences long and rhyme throughout — and so I visited that old vine-covered house in Paris constantly. And you can bet how excited I was for the Madeline movie adaptation... and subsequently disappointed I was by it. I mean, even though my memories of the books are still joyous, the Madeline movie is still a bit of a mess all these years later.

To backtrack, Madeline weaves a lot of the book storylines together: getting a dog, bursting an appendix, that jerk Pepito, joining the circus, it’s all touched upon. The main plot, though, is that Lord Covington is trying to sell and shut down the girls' boarding school and Madeline is determined to sabotage his place. However, this scrappy little orphan is a veritable magnet for trouble, and she gets into all sort of mishaps along the way. Did I mention that the Spanish Ambassador’s son is a total, total jerk?

Anyway, the short version is that while Madeline takes you back to a simpler time, it was also reeeeeally hard to stretch out those books into a full-length feature successfully. Don't believe me? Here are some of Madeline’s strangest moments.

Wait, what? How creepy is for a group of pre-teen girls to be smiling at this couple playing tonsil-hockey?

2. Madeline Puts On A Terrifyingly Bad Display Of Child Acting

Even when the bar is already low for child acting... even when in this scene she's supposed to be a child, acting.

3. What's With This Weird Native American Mask, Tho?

Miss Clavel literally got out of bed to hear these kids cry about how they didn't get major surgery.

Yeah, I'd be making that face, too.

Do people see with their hands now, what's with all the dramatic gesturing?

6. "I've Suddenly Lost My Appetite. You See, This Chicken Was A Friend Of Mine."

Oh cool, this is the part when Madeline gives the boarding school a modern makeover and petitions vegetarian options.

7. JK, It's The Part When She Does The Chicken Dance & Mr. Monopoly Is Not Pleased

What kind of education is this, anyway?

Dude, do these kids think that Pepito is going to kill them? The kid rides a vespa for God's sake.

9. All Of This Ridiculousness, With Special Points To That Perm

10. Madeline, For Whatever Reason, Is The Only One With Reasonable Sleeves

So she lost an appendix but gets to keep her dignity, which is pretty cool.

11. When Pepito Tries To One-Up All Of Their Uniforms With This Matador Costume

Actually, I guess it's not so bad when you put them all next to each other.

The pink stockings took it too far.

13. You Know There's Some Weird Fan Fiction Out There Based On This Scene

14. OK, This Kid Hand-Crafted A Guillotine, Maybe We Should Be Concerned That He's A Serial Killer-In-Training

Again, Pepito is the worst.

This kid is stressing me out, I can't imagine how Miss Clavel keeps it together.

16. This Dog Is The Best Actor In This Entire Movie

She has a full range of emotions.

And the girls just kind of watch and shout at him from the window.

God bless this tiny Zooey Deschanel lookalike for not bursting into hysterics at that line.

No, no you did not. You said "What about Miss Clavel?" and let your 9-year-old friend join the circus, I was there.

Oh well. Suffice to say, the movie wasn't perfect. But if you're looking for something silly that will take you back to your childhood and the awkwardness that came with it, Madeline is worth revisiting.