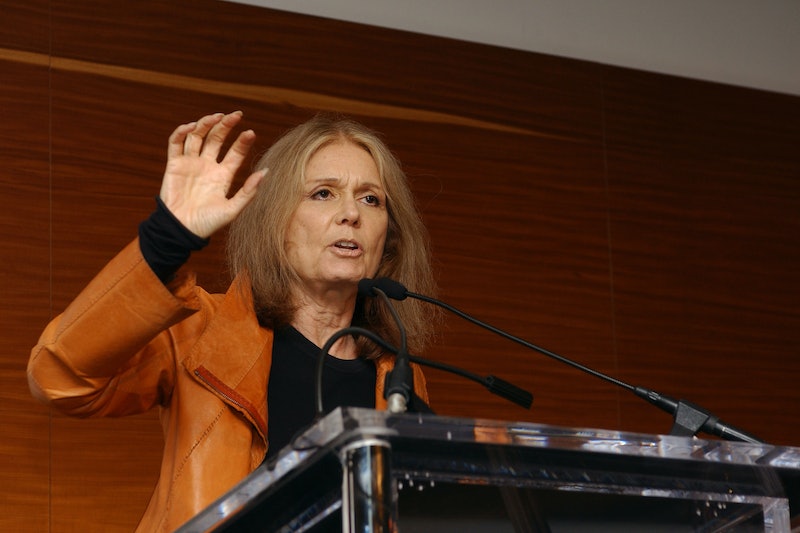 Feminism has been around a long, long time, and it is constantly evolving, rising to meet new challenges, taking into account new ideas, and adapting to meet the needs of a changing world. Nevertheless, there are lots of feminist quotes that still ring true decades or even centuries later — because there really is still something timeless about the search for gender equality. And feminist quotes from the 1970s might be some of the most impactful. After all, the '70s were nothing if not a hotbed of feminist thinking.

The '70s were the heart of what activists at the time dubbed "second wave feminism," which began in the 1960s and carried over into the following decade. And it was one hell of a decade: The 1970s saw the Roe v. Wade decision that guaranteed the right to abortion access; the launch of Ms. magazine to provide an empowering alternative to traditional women's media; efforts to enact the Equal Rights Amendment; and a new focus on topics ranging from women's sexuality to domestic violence to workplace inequality. And naturally, it would not have happened without a lot of feminist writers and thinkers whose words still ring true today.

Here are nine quotes from the 1970s that are still relevant to modern feminism. May we never forget where we came from while always looking ahead to the future.

1. "I don't want to prove the superiority of one sex to another; that would only be repeating a male mistake."

3. “There is nothing revolutionary whatsoever about the control of women's bodies by men. The woman's body is the terrain on which patriarchy is erected.”

5. “No person is your friend who demands your silence, or denies your right to grow.”

6. “It takes a great deal of courage and independence to decide to design your own image instead of the one that society rewards, but it gets easier as you go along.”

7. "Both the victimization and the anger experienced by women are real, and have real sources, everywhere in the environment, built into society. They must go on being tapped and explored by poets, among others. We can neither deny them, nor can we rest there. They are our birth-pains, and we are bearing ourselves."

8. “Courage to be is the key to revelatory power of the feminist revolution.”

More like this
Beyoncé & Madonna’s “Break My Soul” Remix Honors A Group Of Black Icons
By Stephanie Topacio Long
42 Black Owned Fashion & Beauty Brands To Support Today & Always
By Mekita Rivas, Shea Simmons, Kui Mwai and Dominique Norman
22 Movies On Netflix That Are Perfect For The Whole Family
By Bustle Editors
Your Daily Horoscope For August 16, 2022
By Alexandria Lettman
Get Even More From Bustle — Sign Up For The Newsletter