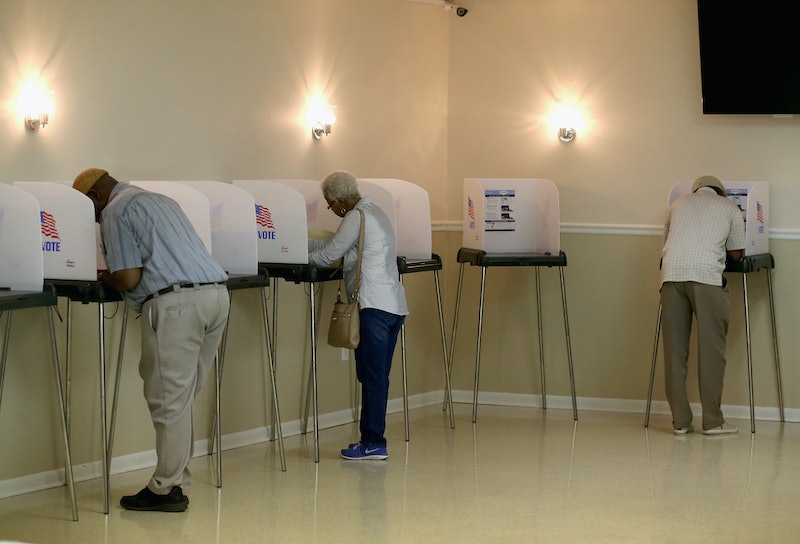 With each state having its own unique voter laws and registration deadlines, casting your ballot isn't always a straightforward process. As a one stop nonpartisan voting shop, the website Vote.org is here to simplify it. The site aggregates information on voter registration, absentee registration and voting, poll location, and voter laws in its comprehensive, user-friendly platform. Its founders, Silicon Valley aficionado Debra Cleaver and former Rock the Vote President Ashley Spillane, hope to encourage more people to participate in the election process. So far, they're off to a good start.

Vote.org went live on April 1, 2016 as a new and improved version of its predecessor site called Long Distance Voter, which was founded eight years prior. Initially, Long Distance Voter was responsible for feeding data to Google's "How to Vote" project. Most notably, it also took advantage of the uptick in phone app popularity and allowed smartphone users to fill out and even mail their absentee ballots from the palm of their hands. Between 2008 and 2016, 210,000 new voters registered through the technology, it redirected 701,000 absentee ballot requests, it allowed 495,000 people to easily check their registration status, and received over 5 million views.

Essentially, all information offered by Vote.org can be found on other official voting websites. As surprising as it may sound, however, those official state websites aren't always the easiest to navigate. Furthermore, the latter process is time consuming and requires the voter to distinguish between official and unofficial poser sites. Vote.org collects the information from dozens of voting sites throughout the nation and rebrands it to remove any barriers. Contrary to some assumptions, it does not allow people to vote online. Instead, it streamlines the absentee ballot process by allowing you to mail a vote through its technology. In other words, think of it as a bridge to voting. Votes still must be counted legitimately through government organizations or at polling sites.

New York University School of Law's Brennan Center and Craig Newmark traced how voting laws have changed in recent years. Let's just say, voting hasn't become any easier. In a poll of over 1,000 Americans, 78 said they had never been encouraged to vote in their state's primary or caucus. Moreover, 16 states have enforced new voting restrictions just this year. These include the implementation of voter IDs that, in certain cases, must be obtained from particular offices at oddly specific times. Not sure if they apply to your state? Vote.org will give you all the info you need.

In 2012, CNN's David Frum accused the entire election process of being purposefully convoluted. For example, he claimed that politicians allegedly have the power to relocate polls places to disadvantage political opponents. Though that claim has not been officially verified, it brings to mind an important question: Why doesn't every state have the same laws to make it simpler?

We may not be able to change the laws, but we can certainly make them more transparent and accessible.

With Donald Trump being the presumptive GOP nominee, getting the vote out is becoming infinitely more important. If you have an opinion, don't let the barriers discourage you.

More like this
How To Protect Your Digital Privacy If You Need An Abortion Post-Roe
By Kaitlyn Wylde
Police Shove 'Full House' Star Jodie Sweetin At An Abortion Rights Protest
By Radhika Menon
How To Fight For Reproductive Rights, Based On How Much Time You Have
By Courtney Young
How 5 People Upended Their Lives To Fight For Abortion Rights
By Hannah Smothers
Get Even More From Bustle — Sign Up For The Newsletter