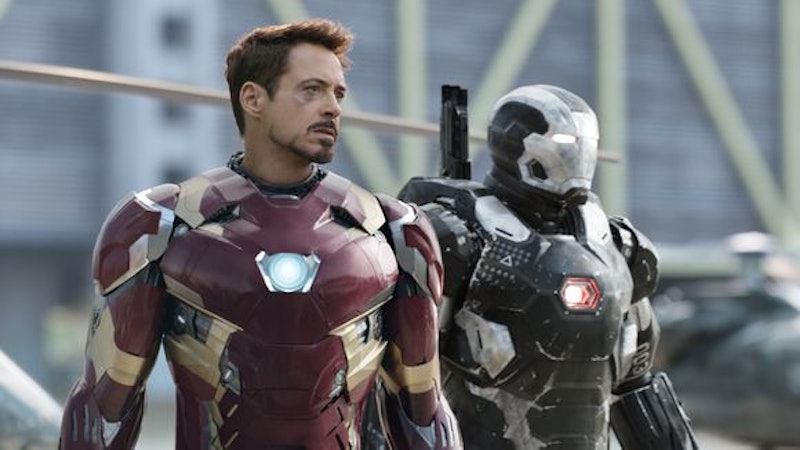 Although you'd like to think that a blockbuster franchise wouldn't kill off its lead characters, you can never be too confident; we all lived through Ned Stark getting offed on Game of Thrones and Drew Barrymore saying goodbye to Scream. So it's natural, then, that fans are nervous about the fate of certain Captain America: Civil War characters, particularly the heroes taking on the leading roles. Although most people feel pretty confident that Cap stays alive in the film, due to the fact that more Captain America movies are likely on the way, plenty of Marvel fans are wondering: does Iron Man die in Civil War ? It's a valid question, if a totally depressing one.

Thankfully, the answer (spoiler!) is no, Iron Man does not die in Captain America: Civil War. Although he suffers some injuries, and definitely some heartbreak, Tony Stark and his alter ego are very much alive at the movie's end. The closest Iron Man gets to death is when Cap pins him on the ground with his shield, but even then, it's clear that he's not going to die; although the heroes are in an intense fight, it's hard to believe that Steve would actually kill Tony, his close pal and fellow Avenger.

Yet fans going into Civil War have every right to worry about the hero's fate. Although Robert Downey Jr. signed a contract in 2015 that stated he'll appear in 2018's Avengers: Infinity War, it's not yet known what capacity Iron Man will appear in during that movie, and if he'll be back for other Marvel movies afterwards, including more Iron Man films. For awhile, Downey Jr. had claimed that Iron Man 4 was not a possibility, yet in April, he told ABC's Nightline that he's open to doing another film in the series. "I feel like I could do one more," Downey Jr. said.

If the actor is down for more Iron Man films, then it seems likely that Marvel would make that happen, and not kill off the character anytime soon — or ever. As long as Downey Jr. is on-board to reprise his iconic role, then you can bet Iron Man will appear in the MCU for a long, long time.