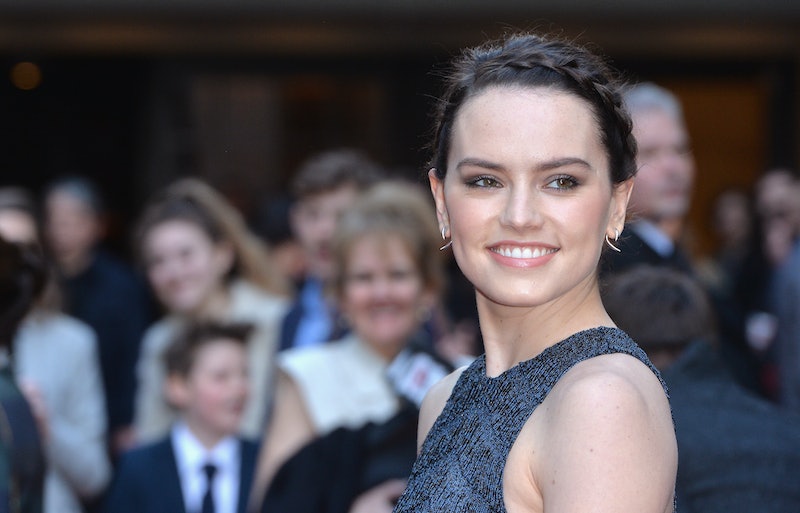 Still upset that Daisy Ridley didn't land the coveted role of Lara Croft in the upcoming Tomb Raider reboot? (The part eventually went to recent Oscar winner Alicia Vikander.) If so, this news should help ease your pain a bit. The Star Wars actress will soon be trading in her lightsaber for Shakespeare: according to The Hollywood Reporter, Daisy Ridley will star in Ophelia , a retelling of the Bard's Hamlet from his love interest's point of view.

Based on a 2006 novel of the same name by Lisa Klein, Ophelia will be adapted by Mad Men writer Semi Chellas and will also star Naomi Watts as Gertrude, Hamlet's mother and the Queen of Denmark. (No word yet on who will play the brooding prince himself.) Obviously, in Shakespeare's original tragedy, Ophelia meets an unfortunate fate, drowning herself in a river after Hamlet rejects her and kills her father for good measure. But both Klein's book and this movie are targeted towards a Young Adult crowd, which means that it "takes a different road, landmarked with a secret wedding, characters who survive and a semi-happy ending," per THR.

While we all try to contemplate a version of Hamlet that has a "semi-happy ending," here are 13 successful re-tellings of Shakespeare's plays that Ophelia should learn from. (Note: movies that simply update the plays to modern times while keeping the Bard's words intact — like Baz Luhrmann's Romeo + Juliet — don't count; these are movies that tell the story from a completely new perspective.)

This classic teen comedy starring Julia Stiles, Joseph Gordon-Levitt, and the late great Heath Ledger updates the events of Shakespeare's The Taming Of The Shrew to a '90s high school, in which a new student enlists the school's resident bad boy to woo a "shrewish" girl so he can go out with her beautiful younger sister.

A camp classic '50s sci-fi flick featuring a character named Robby the Robot may seem like an odd movie to be based on on Shakespeare — and yet Forbidden Planet takes plenty of inspiration from The Tempest, moving the location from a magical island to a far-flung alien planet, with enigmatic scientist Dr. Morbius serving as the story's Prospero-like antihero.

OK, so this film isn't itself an adaptation of Shakespeare, but it does contain a play-within-the-movie that re-tells the ending of Hamlet with time machines, a bi-curious Laertes, and a show-stopping song-and-dance number called "Rock Me Sexy Jesus." It's worth seeking out this underrated comedy for that musical interlude alone.

The Taming Of The Shrew seems a popular play to get reinterpreted, since this classic Cole Porter musical — and its 1953 film adaptation — are also based on that Shakespeare comedy. In this version, a formerly married couple are starring in a production of the play while simultaneously living out the events backstage.

A king is murdered by his dastardly brother. The king's son goes into exile, only to return and vow vengeance upon his evil uncle. The Lion King may have a slightly happier ending than Hamlet, but the parallels are unmistakable — all the way down to Timon and Pumba as the prince's bumbling sidekicks, Rosencrantz and Guildenstern.

This indie drama from Gus Van Sant (Good Will Hunting, Milk) starred River Phoenix and Keanu Reeves in a loose re-telling of not one, not two, but three Shakespeare plays: the histories Henry IV Part 1, Henry IV Part 2, and Henry V, with Reeves' male hustler Scott subbing for King Henry, and the Gem State subbing for medieval England.

The tragedy Othello centers largely around the villain's ability to use jealousy to drive a wedge between the title character and his wife. What better setting in which to adapt those themes than high school, where relationships can feel like matters of life and death? Julia Stiles starred in her second Shakespeare retelling alongside Mekhi Phifer and Josh Hartnett.

Sadly, in order to adapt Shakespeare's King Lear to feudal Japan, legendary director Akira Kurosawa had to change the title character's three feuding children to sons instead of daughters. But still: it's Shakespeare with samurais, so it's hard to complain.

You can make Shakespeare into high school comedies, musicals, and samurai movies — so why not a martial arts film? Jet Li starred in this action movie that took cues from Romeo & Juliet to tell the story of two warring families set in modern day California.

If Ophelia is going to retell Hamlet from his girlfriend's perspective, then this 1990 movie retells it from his best friends' perspective. Based on a stage play by famed playwright Tom Stoppard (who also wrote the screenplay to Best Picture winner Shakespeare In Love), this dramedy finds the two title characters mostly just… hanging out… while the bloody events of Shakespeare's play unfold offstage.

A fast food restaurant may not be as dignified a setting as the moors of medieval Scotland, but, in Scotland, PA, Duncan's Café is the site of just as much backstabbing, betrayal, and murder as the Bard's bloody tragedy Macbeth. This black comedy boasts a stellar cast, including Christopher Walken, Maura Tierney, Kevin Corrigan, and Amy Smart among many others.

Cross-dressing, mistaken identity, and love tri-quad-quint-angles: if all of these well-worn tropes were good enough for Shakespeare, they're certainly good enough for an Amanda Bynes comedy. This plot of this movie, which features Bynes disguising herself as her twin brother to attend his boarding school, is pulled straight from the pages of Twelfth Night.

Are there two more tragic romantic figures than Tony and Maria? You'd have to go all the way back to… well… Romeo & Juliet to find a more tragic pair of star-crossed lovers. And that's no coincidence, since this musical simply takes that play, transplants it to 1950s Manhattan, and replaces the Capulets and the Montagues with the Sharks and the Jets.

Obviously, there are a lot of different ways you can reinterpret Shakespeare — but it's unclear how Ophelia plans to give its heroine a happy ending. However things work out for the title character, producer Daniel Bobker says that "there's something extra precious in bringing to life a treasured female icon, celebrated for centuries as an alluring figure in the shadows of Shakespeare's most famous work, without ever really having her own story told." If there's anyone out there who can bring Ophelia's story to life, I'm sure it's Daisy Ridley.