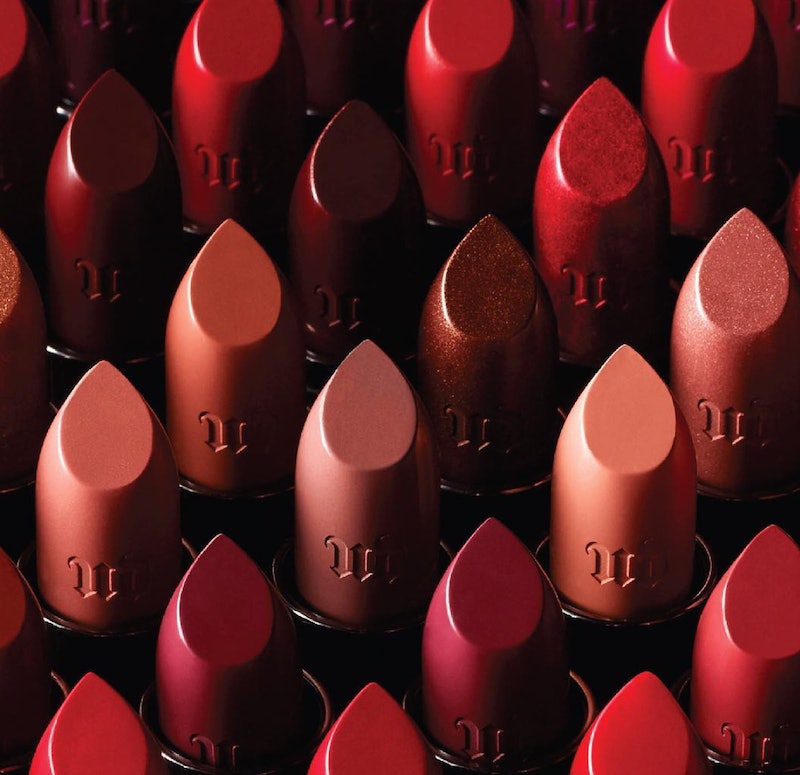 Lipstick lovers and Beauty Junkies had their lives made this week. Why? Oh, just because Urban Decay is relaunching its entire lipstick collection as Urban Decay Vice Lipstick. The lippies have been reformulated and repackaged with 100 shades in six finishes, which are Mega Matte, Comfort Matte, Cream, Metallized, Sheer, and Sheer Shimmer. The Vice lipsticks will be available as of June 5. The line includes dozens of new shades, according to Refinery 29. Also, the brand is exhuming several previously discontinued shades. As if that weren't enough, the Vice lipsticks boast an update of the classic shotgun shell packaging. It's a blockbuster range of bombshell shades that nods to the brand's storied and colorful past while keeping its modern edge in tact.

Urban Decay lipsticks have always been pout perfection and the tradition will remain with the Vice version. There are so many shades to choose from. Given UD's propensity for launching "vaults," which house entire and beloved collections, I am left to wonder if the brand will eventually sell a Vice Lipstick vault containing all 100 shades? Could you imagine? That's an OMFG moment in the mak(eup)ing.

While 100 shades of lipstick in one package would be nothing short of epic, it would also probably be pretty expensive. But it wouldn't be unheard of. "I have too many lipsticks," said no one ever when it comes to lipstick fiends and devotees! That's why a Vice Lipstick Vault is a distinct possibility.

However, there are no plans for one at this time. Urban Decay's reps told Bustle, "No, we don't have plans one way or the other yet!" So while a Vice Vault is not on the docket now, we can hope, wish, and dream that one will be created eventually.

As noted, the brand is known for vaults. It sells the Urban Eyeshadow Vault for $245. It also launched the Urban Lip Vault, which is currently out of stock on its site. Then there were the Naked Vaults, which sold out quickly. So. Many. Urban. Decay. Vaults.

The Vice lipsticks pretty much avail themselves of vault packaging. They practically ask for it! I could totally see UD launching a Vice Vault in the fall, just in time for the holiday season.

The best thing about a potential vault containing all shades? You could try new colors. You would share with your lipstick-loving friends. It would be a lipstick party.

The Vice lippies, which are $17 a tube, look like heaven because they are heaven in tube.

Everyone has their vices. Having a lipstick addiction isn't so bad, is it? Here's to hoping Urban Decay eventually delivers a Vice Vault.

More like this
42 Black Owned Fashion & Beauty Brands To Support Today & Always
By Mekita Rivas, Shea Simmons, Kui Mwai and Dominique Norman
14 Fall Lipstick Colors That Are Trending For 2022
By Audrey Noble
Most Comfortable Underwear For Big Butts
By Audrey Williams
Kate Middleton’s Wedding Perfume Is On Offer Right Now
By Rebecca Fearn
Get Even More From Bustle — Sign Up For The Newsletter