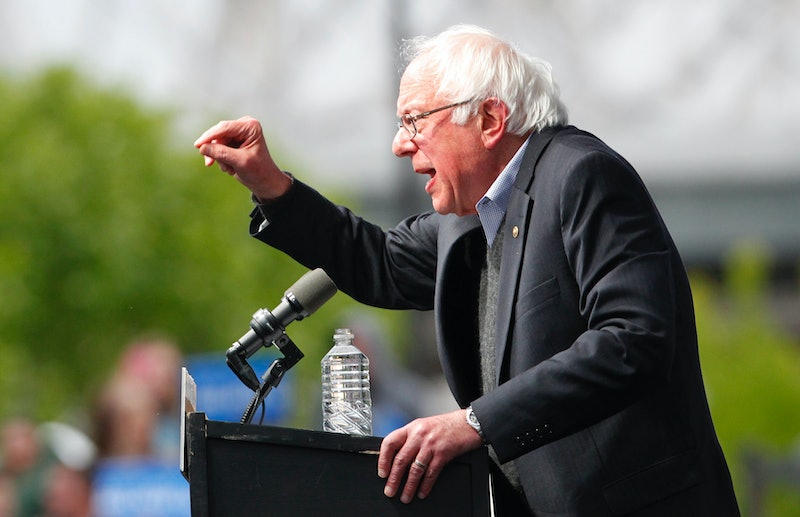 On Thursday, NPR published the transcripts of a recent interview with Vermont Sen. Bernie Sanders and Steve Inskeep, and they are revealing. To begin with, Sanders made it explicitly clear in the interview that he does not plan to drop out until “the last vote is counted” at the Washington, D.C. primary on June 14. He also repeated the great fallacy of “I think we’ve got a good shot to win in California,” which suggests that Sanders lack a sense of the political reality. But the overall takeaway from the interview is that Inskeep asks Sanders some really, really important questions about the Democrats' future, and Sanders ducks pretty much all of them.

It's aggravating. I understand that his campaign can’t come out yet and say Sanders has no chance at the Democratic nomination. But I do think he needs to be thinking seriously about how to end this in a way that encourages party unity, and this NPR interview sure doesn’t make it sound like he’s not taking the future of the Democrats all that seriously.

After some preliminaries, Inskeep really gets down to business and puts to Sanders what is, in my opinion, the most important line of questioning facing him right now: At this late stage in the campaign, is he not dividing the party? Is he risking helping put Trump in the White House by not aligning himself more with Clinton and working to make sure his voters go to her, not Trump, as many of them so easily could?

INSKEEP: Are you threatening your revolution by continuing, and alienating some Democrats from voting for Hillary Clinton eventually?

You know, two years ago in 2014, 63 percent of the American people didn't even bother to vote, and 80 percent of young people and 80 percent low-income people didn't bother to vote in the midterm elections — I think that that is pretty pathetic. And I think that Democrats do well when the voter turnout is high. Republicans lose when the voter turnout is high. So I'm going to do everything I can to stimulate political discourse in this country — get young people, working people involved in the political process.

We think we have a path towards victory — admittedly it is a narrow path, but when I started this campaign we were 60 points behind Secretary Clinton; yesterday here in early May we won in Indiana. I think we've got some more good victories coming — so we are in this race until the very last vote is cast.

I admire all those things about Sanders, but literally none of that answers the question of whether he is fracturing Democratic voters and making it harder for Clinton to beat Trump in November. It is recycled parts stripped from stump speeches. Politicians do this, of course, but this really undermines the gravity of Sanders’ current situation. The Washington, D.C. primary is next month, and there is a very real possibility that disappointed, disaffected Bernie voters will seek comfort in Trump’s waiting arms, or not vote altogether, unless he figures out a way to bring them around to Clinton.

INSKEEP: Another variation on this question from Twitter: Which is more important, a Sanders presidency or a Democratic presidency?

SANDERS: Well, I think that if you look at the issues facing this country, and the differences between Secretary Clinton and myself, I think, a) my policies and my agenda will be better for the working families of this country, and second of all, if you look at virtually every poll that's out there — including one from CNN today — Bernie Sanders does better against Donald Trump than does Hillary Clinton. So if we want to make sure that we do not have a Donald Trump in the White House, I think that at this point Bernie Sanders is the strongest candidate.

Again, this is not what was asked. It’s a nice idea, but Sanders is not going to be the nominee. While some may argue the time has not yet come for him to drop out, the time has certainly come for him to be stop alienating his campaign — and his supporters — from Clinton, for the sake of the general election outcome. Inskeep pressed the Vermont senator again on this issue, and the answer was less than satisfactory.

SANDERS: Well, what I'm just suggesting is — if you look at every poll that's out there — Bernie Sanders does better against Donald Trump, more likely to defeat Donald Trump, than Hillary Clinton.

INSKEEP: One more question along those lines, and this is my question now — you told Chuck Todd of NBC the other day that if Secretary Clinton does clinch the nomination quote "the responsibility will be on Secretary Clinton, to convince all people," not just your supporters, "that she is the kind of president this country needs." Are you convinced, Senator?

SANDERS: Well I thought my point was, that it's true of Secretary Clinton, it's true of Bernie Sanders, it is true of Donald Trump — you want to go out and win elections, you've got to convince the people of this country that you are the candidate that works best for their interests. And I think there's a lot of work that has to be done on the part of all of the candidates.

Is it Clinton’s job to make people want to vote for her? 100 percent. But is it Sanders’ job to see beyond what’s good for his campaign and to what’s good for the Democratic party —for the nation? Also 100 percent. Clinton isn’t the person best positioned to convince Sanders supporters where to go — he is.

INSKEEP: The reason I ask is because you did say earlier in the campaign she was not qualified. Can you convince yourself, or have you convinced yourself, that she is qualified?

SANDERS: Right now — as I have said many times, Steve — I think that a Donald Trump presidency would be a disaster for this country. And I intend to do everything that I can to see that that does not happen.

Again, Sanders failed to answer the actual question — and it was a pretty basic one about whether the former secretary of state and New York senator was qualified to be president. And while it's good that Sanders claims "I will do everything that I can" to make sure there isn't a President Trump, time is running out for him to actually do it.