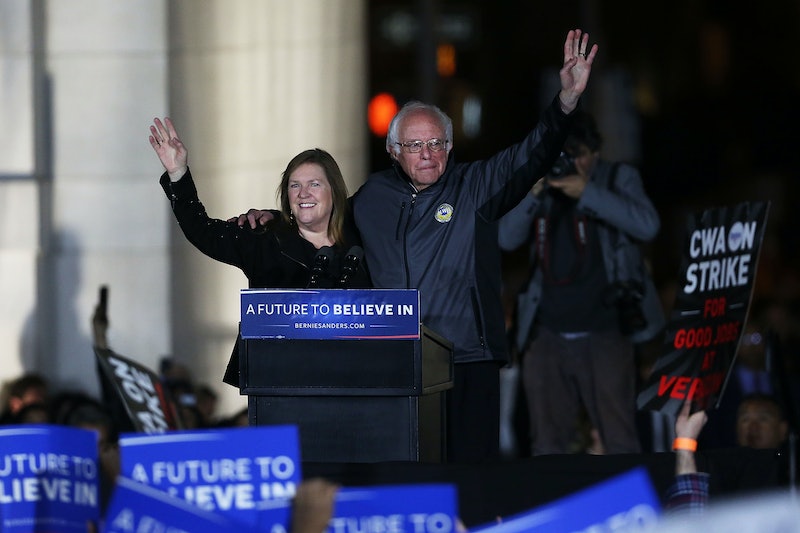 Bernie Sanders’ campaign is still grooving to California Dreamin'. Jane Sanders, Bernie's wife and adviser, appeared on MSNBC’s Morning Joe Thursday to discuss the future of her husband’s run for office and respond to some of the signs this week that the campaign is on its last legs. After a less-than-inspiring performance at the five state primaries on Tuesday (he won just one of them), news broke Wednesday that 225 staffers will be let go.

While Sanders, who never fails to be an excellent and delightful speaker, made some good points, she also revealed something that shows just how impossible her husband’s nomination is at this point: He’s largely depending on a dazzling performance in California.

“Absolutely in it to win it,” Sanders said Thursday. “You remember in mid-March, after a string of losses, the media wrote his political obituary and we came back to win eight in a row. So, we’re expecting to do the same here."

Willie Geist pressed Sanders about California: “Obviously, Bernie has dominated among younger voters, but one of the places I think you would even admit he’s been disappointed is in his support from minority voters, particularly Latino and African American, where Hillary Clinton has really dominated. How do you change that narrative and how do you change that trend as you head to a place like California, where he’ll certainly need that?”

Sanders made it clear they're optimistic, but that doesn't make a California win viable:

We are making inroads, especially among those under 45, we’re winning across races among those under 45, so it takes a while for them to get to know Bernie. Latinos we’re winning in a number of states we’ve been winning, we’ve been picking up all along and so were gonna just keep on doing that it’s basically getting out in front of them talking with them letting them know that he’s concerned about the issues that affect them and that his general bold vision for the future actually affects them disproportionately, because as you say, a lot of them have lower incomes, they are concerned about the cost of higher education and a number of the issues that Bernie puts out there.

Sanders had a lot of compelling reasons Sanders could, in theory, win California. But theory is not evidence — and the evidence suggests Sanders will not claim California. The state is ethnically diverse. It is heavily urban. It is everything that Sanders’ successful states tend not to be. FiveThirtyEight currently projects Clinton as having a 88 percent chance of winning.

Sanders trails Hillary Clinton by nearly 300 pledged delegates, and Clinton has pretty much all the superdelegates (520 to his 39). The California primary will award 546 Democratic delegates. It's understandable that Sanders is aiming to get the biggest bang for his buck in the delegate-rich state, but it's not realistic.

To add insult to injury, 40 of those 225 staffers being laid off are from the Sanders camp in California, at a time when the campaign clearly needs more outreach in that state, not less. Maybe it does take a while to "get to know Bernie," as his wife said, but that time has passed. The California primary is June 7, and unfortunately, it won’t be what saves Bernie Sanders.