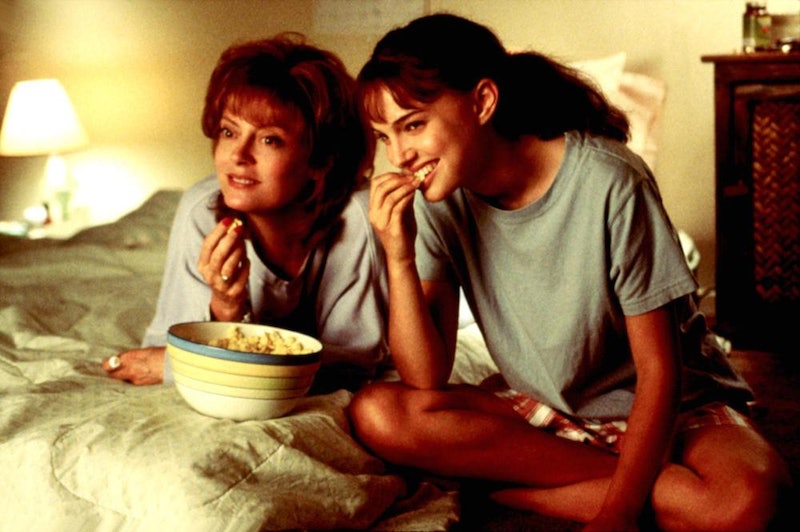 Mother's Day is a day best spent doing whatever it is your mother wants to do. And if your mother wants to spend her Mother's Day watching a movie, there's only one film you should consider: Anywhere But Here. The 1999 dramedy starring Susan Sarandon and Natalie Portman might not be the best known film about motherhood (hello, Steel Magnolias), but it's certainly one of the better ones to watch if you don't want to spend the day in tears. The movie, based on the novel by Mona Simpson, is about a mis-matched mother-daughter pair who move to Beverly Hills in the hopes of starting a new life. But, as with any good mother-daughter movie, it's not all it's cracked up to be, and that's just one of the reasons why Anywhere But Here is the perfect Mother's Day movie to watch with your mom.

The film follows 16-year-old Ann August (Portman), who's sick and tired of living with her erratic, eccentric mother, Adele (Sarandon). Ann isn't thrilled when her mom decides, seemingly on a whim, to move cross country, and what follows is a sweet story of a complicated, layered mother-daughter relationship and a coming-of-age story you're definitely going to want to see. Plot-wise, it's pretty obvious why Anywhere But Here is a great Mother's Day movie, but that's not the only thing that makes it a great movie to watch with your mom. The film has everything you'd want in a mother-daughter movie: humor, heartbreak, fights, tears, laughter, and, most of all, two kickass women who just happen to be related. Here are a few other things that make Anywhere But Here the best Mother's Day movie around.

1. It Will Make You Laugh

Anywhere But Here deals with some pretty serious mother-daughter drama, but it's also a comedy. And Sarandon's over-the-top Adele is, when not totally cringe-worthy, incredibly entertaining. What's better than laughing with your mom?

It's practically law that when you become a mom, you're going to embarrass your child. But the beauty of Anywhere But Here is that the awkward mom moments are really moments where Adele isn't being particularly embarrassing. Instead, it's Ann who projects her own shame onto her mother. Just a little reminder to us daughters out there to cut our moms some slack.

In Anywhere But Here, as in life, sometimes the hardest person in the world to love is your mother. (I assume the same goes for your kid. Sorry, mom!) But that doesn't mean the love isn't there. And watching this movie with your mom on Mother's Day will definitely remind you to love your mom, or at the very least give her a hug.

Nobody likes saying goodbye to their mother, not even Ann, who spends most of the movie counting down the hours until she can leave her mom and start a life of her own. What's nice about the goodbye in Anywhere But Here is that unlike most mother-daughter dramas, it's not on anybody's death bed. Can I get an Amen for mother-daughter movies that don't end in death and heartbreak?

Anywhere But Here is wonderful on its own, but there's just something special about watching a mother-daughter story with your mom that makes it infinitely better as a Mother's Day movie. So on May 8, go cuddle on the couch with your mom and enjoy this film together.