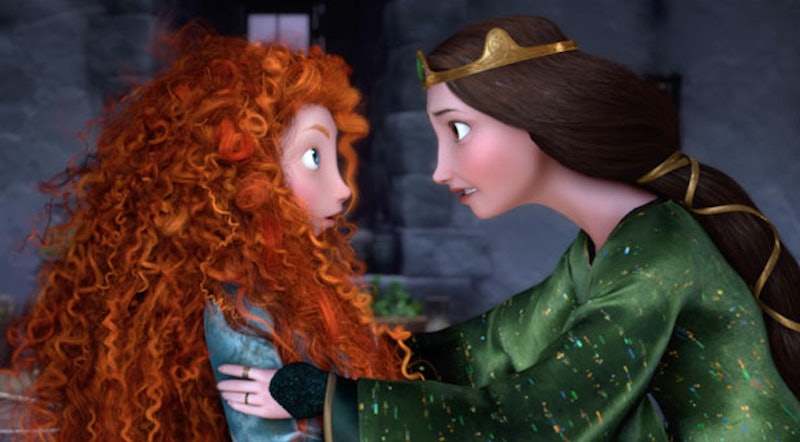 Like many Pixar fans, I love the 2012 film Brave for giving audiences the studio's first female protagonist in Merida, the Scottish princess whose rebellious nature gets her into a wee bit of trouble. Sure, some people complain that the character is, like in many Disney movies, a princess, but Merida's independence, drive, courage, and lack of a love interest make the film a feminist dream. In addition to giving high screen time to its complex women characters, Brave captures something that I think many young women go through in their lives: that rebellion against one's mother as a teen can grow and transform into incredible appreciation for her. And because of that, I'm convinced that Brave is one of the best Mother's Day movies out there.

In the movie, it's revealed that Merida's parents, particularly her mother, have always striven to raise her to be the perfect embodiment of royalty. Much to Queen Elinor's chagrin, though, Merida has a rebellious streak. She's adventurous, likes to ride her horse and shoot arrows, and takes more pride in her abilities than her grace. So when Merida reaches marriage age and the noble clans present their young sons as suitors by having them shoot an arrow, she choose to have none of it. Instead of allowing the boys to shoot for her hand in marriage, Merida shoots for her own hand, an act that causes her mother to most definitely not be pleased. This sets off a chain of events that has Merida seeking out a witch, turning her mother into a bear, realizing what a terrible mistake she's made, and fighting to return Elinor to her true form.

Most of Brave's emotional heart lies at the center of this mother-daughter relationship. There's something incredibly poignant in the film, and it hits women my age, in their late 20s or early 30s, particularly hard. At this age, you can reflect on the fact that, as a young girl, you likely hit your teenage hormonal growth spurt and went from loving your mother to treating her with completely irrational insanity, angst, and hatred. You tried your damnedest to avoid being like, acting like, or turning out like your mother — I did this, many of my friends did this, and, as a teen, even my own mother did this. Rebellion at that age is natural, especially if, like in Brave, your mother's life, through, your teenage eyes, seems undesirable and something to be avoided.

Many mothers, meanwhile, no doubt wonder how they could have spawned such a frustrating child, who constantly bends rules and demands authority. Their only hope in reining in the rebellion is to impose more rules and insist on their daughters doing things the way they did them, just like Queen Elinor insists for Merida in Brave. But, in my experience, I've noticed that there tends to be a change in your mid-20s; after having a tumultuous relationship with mom for 10 or 15 years, many young women begin to realize, "Hey, my mother isn't so bad." Or: "Hm, if I had tried a little harder to be more like my mother, and taken more of her advice, maybe I would have been better off today." And, eventually, even: "I never realized that my mother is one of the best people I have in my life, so I need to start treating her as such."

Mothers, meanwhile come to the realization that their daughters are individuals, not clones. Yet, as many can attest, oftentimes mom relish nothing more than the moment when their child suffers a minor failure and returns to their arms in need. It's a cycle, for sure, and one that will likely continue for me, at least, if I have my own daughter. And of course, this doesn't happen for everyone'; women without mothers or whose mothers aren't involved, are abusive, or neglectful, won't have the same experience.

But it rings true for many women my age, who grew up in a time of so-called "post-feminism", thinking we could be anything we wanted and getting encouragement to have rebellious streaks inside of us. Meanwhile, many of our mothers grew up in a time where they had to fight long and hard for their equality and their desires, during the era of Roe v. Wade, first divorces, and the beginning of women's lib. Yet regardless of the differences, I truly believe that there is a point where daughters and their mothers come to a mutual understanding, and become each other's best friend. This is what Brave is really about, and it's why it's a movie perfect for the day all devoted to mom.

More like this
Ashley Judd Wrote About Late Mom Naomi, Choice, & Motherhood In A Powerful Essay
By Grace Wehniainen
Jennifer Lopez Found The Perfect Ben Affleck Throwback Video For Mother’s Day
By Stephanie Topacio Long
A 'Bridgerton' Star Just Dropped A Major Hint About Joining The Live-Action Barbie Cast
By Bustle UK
This 'Hunger Games' Alum Will Star In A New Medical Drama Titled 'A Mistake'
By Alyssa Lapid
Get Even More From Bustle — Sign Up For The Newsletter