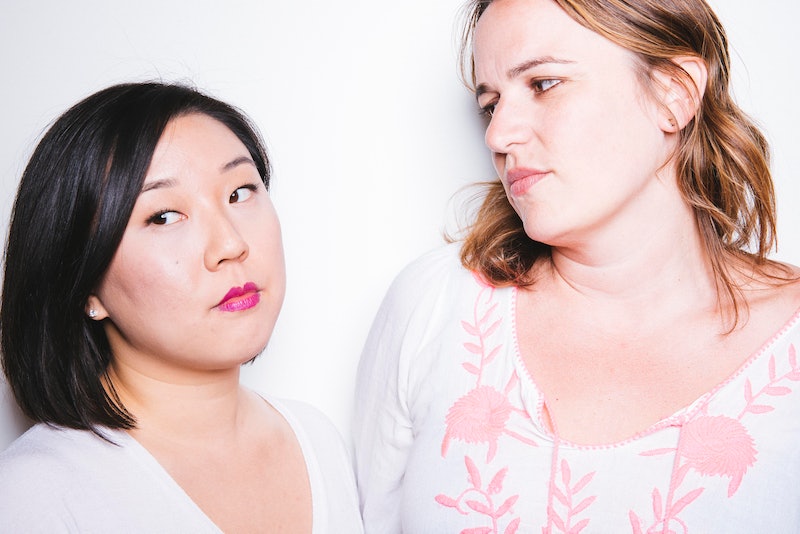 Generally speaking, there are two types of people out there: Those who avoid confrontation at all costs, and those who thrive on stirring up the kind of interpersonal disasters found so frequently on reality television. But what are the signs of a truly dramatic personality? According to researchers, it goes beyond a taste for the Real Housewives franchise — people with a so-called "need for drama" (NFD) personality are in a constant cycle of disaster and victimhood, often to the point where they manipulate other people to fulfill the need for, well, drama.

If you're thinking you know a few people that fit the bill, you're not alone. According to Science of Us, researchers at the University of Texas at El Paso developed the scale measuring NFD partly as a result of lead researcher Scott Frankowski's own experiences with a dramatic coworker. The scale isn't intended to diagnose anyone with a personality disorder; histrionic personality disorder and borderline personality disorder have already got the pathological need for drama covered. Rather, Frankowski told the Science of Us that the NFD scale is supposed measure the trait on a more everyday scale — not so serious as to be clinically significant, but strong enough to have a noticeable effect on someone's relationships.

Bustle wrote about the study in depth once before, so I won't go into significant detail about it here; in short, though, researchers found that people who scored on the higher end of the NFD scale shared three characteristics: "Interpersonal manipulation, impulsive outspokenness, and persistent perceived victimhood." In other words, people who score highly on the scale tend to be manipulative, they enjoy gossip, and they're quite reactive. Furthermore, as the Science of Us points out, researchers found that dramatic people tend to be more impulsive, which may feed into their ability to create drama seemingly out of nowhere.

So what are the signs you have a need for drama personality? Let's take a look at six indications that drama is your lifeblood, your elixir of life, forever and always — but before we begin, remember that this is for entertainment purposes only. NFD is simply a scale measuring an everyday trait, not the basis for a psychological disorder.

Check It Out: Personality Plus: How to Understand Others by Understanding Yourself, $9, Amazon

1. You Say Things Just To Mess With People

This is pretty obvious, but it bears noting. If you get your kicks winding people up and watching them go, you're probably pretty dramatic. And also kind of mean.

2. You Live For Gossip

OMG, did you hear about so-and-so's divorce? Virtually everyone finds themselves talking about people behind their backs at one point or another, but some people enjoy gossip far more than others.

3. You Speak Without Thinking...

Pretty much everyone has word-vomited before, but as discussed above, dramatic personalities are correlated with impulsiveness, including speaking without thinking.

Needless to say, if you can't keep your opinions to yourself, you might be stirring up more drama than necessary.

5. You Feel Like Everyone Is Out To Get You

This goes back to the "perceived victim" aspect of the NFD scale. Highly dramatic people tend to see themselves as the victim of other people's actions, and they're often sensitive to perceived slights. The NFD scale doesn't specifically measure narcissism, but researchers noted in their paper that there was a moderate association between high NFD scores and self-involvement. "Persistent perceived victimization... does seem to be a self-focused trait, likely lacking any feelings of grandiosity associated with narcissism," they wrote.

6. Dramatic Things Happen To You All The Time

Researchers noted that people with a high NFD have an external locus of control — that is, they see events as happening to them rather than their own actions playing a part in bringing them about. Admittedly, weird things do happen, but if they happen all the time, you might be the common denominator. As the Science of Us explained, "All of this drama feels out of their control — what else is there to do, then, but complain about it, to anyone who will listen?"

To check out the full NFD scale, head over here.

More like this
What Is The Forest Personality Test? The TikTok Trend, Explained
By Georgina Lawton
The Top Mistakes Scorpios Make In Relationships (& How To Avoid Them)
By Nina Kahn
The Best Time To Date After A Breakup, According To Experts
By Bustle Editors
The 3 Most Calm Zodiac Signs, According To Astrologers
By Kristine Fellizar
Get Even More From Bustle — Sign Up For The Newsletter