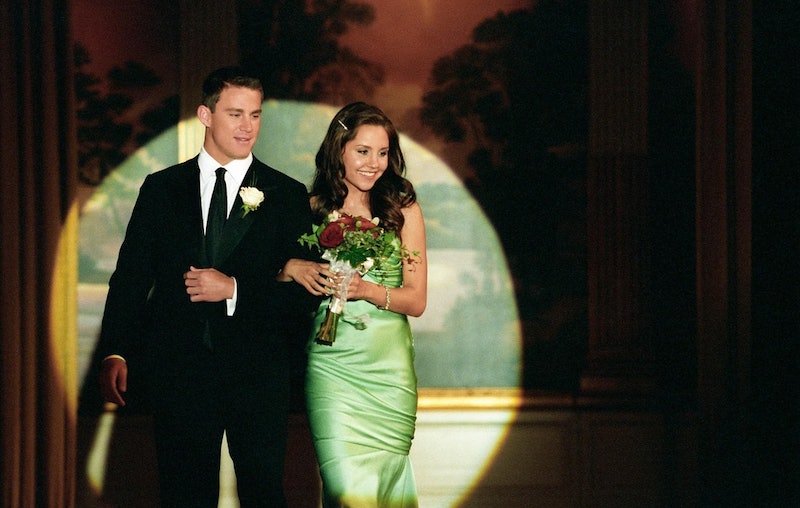 Every generation has their prom regrets, but I think those of us who came of age in the '00s might just have the worst of them all. I mean, there are just so many prom trends from the 2000s that made no sense, what with the collective penchant for cutouts, glitter, and all things Lindsay Lohan reigning supreme. Even as we all enjoy the current '90s redux going on, I think we can safely agree that the '00s style isn't coming back any time soon. Let's hope it doesn't, anyway — we've seen enough Paris Hilton-esque bodycon mini dresses and regretfully bejeweled chiffon ball gowns to last us a lifetime.

What were some of the major prom trends back then, though? Some of them are near-iconic at this point, like the formerly ubiquitous spaghetti straps — while others flew a little more under the radar, like the brief yet slightly baffling love of all things Betsey Johnson. The 2000s also saw Taylor Swift and Beyonce's respective rises to power, as well as a lot of A+ movies starring Amanda Bynes. So, with all that in mind, let's take a walk down memory lane, and revisit some of the weirdest — and most generation-defining — prom trends of the 2000s.

I was often complimented on my complexion back in the days when tanning was cool. Nowadays, I've reverted into a pasty vampire. That said, I just don't understand why high school girls who spent all day inside insisted on looking like they'd just returned from a tropical vacation come prom night.

They were everywhere. Why have straps at all if they are this skinny?

If you didn't wear spaghetti straps, chances are you wore a halter to the big dance.

Cupcake style Betsey Johnson dresses were a must-have back in the day. The bigger the dress, the better. I don't know about you, but mine was electric pink and covered in sequins. I stand by my choices.

Yes. Who knows why we all insisted on having hair that crackled when you touched it.

Chances were very high that your 2000s prom dress featured extraneous rhinestones in some way.

If it wasn't rhinestones, it was sequins.

It's a timeless style, sure, but they were particularly popular at proms circa 2005 or so. Apparently teens were really interested in looking like debutants back then.

The better to show off that spray tan with, my dear! Only one of my friends was brave enough to rock cut-outs at prom, and she did it fabulously. To be fair, cutouts are having another moment, so we may be seeing many in prom photos from 2016 as well.

Before Kylie Jenner's lip kits were all the rage, you couldn't go wrong with a baby pink frosted lip, especially if it came via Juicy Tube.

Even if said pastels happened to be verging on acid green, they were still the height of chic in the early 2000s.

Personally, I only rocked three out of these 12 trends, but then again, I've never been great at keeping up with current styles.