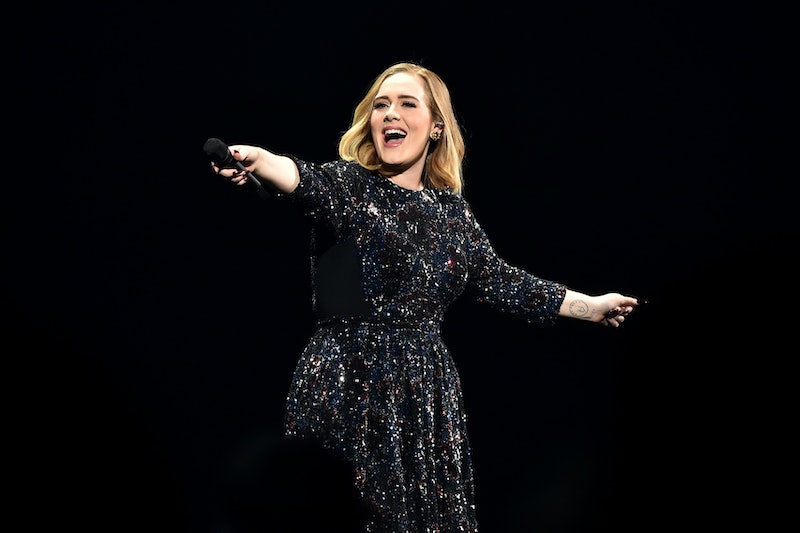 Adele is my favorite fangirl. I mean, how could she not be when the 28-year-old "Hello" singer is still worshiping at the same religious Beyoncé altar as we are? In between songs during her 25 tour, Adele took some time to remind her fans just how much she gives glory to the Lemonade singer, and thankfully, someone in the Beyhive decided to capture the moment on video. Guys, prepare for Adele to give you all the holy ghosts because literally this woman is everything and so much more.

"Do we've got any Beyoncé fans in the crowd tonight?" Adele began as she figuratively threw on a white priest collar with her words. “How is it even possible that she only ever gets better? How is that possible? She is Jesus f***ing Christ,” she said. “Beyoncé is the sickest artist around in the whole entire world; it’s unbelievable. I’ve been listening to her for 17 years, and she’s still making music that blows my mind.” YAASSSS Pastor Adele, she blows all our minds!! Can't you just hear the church angels sing?

It should comes as no surprise though that the acclaimed British singer is showing her spiritual devotion for Beyoncé. Back in 2011, Adele opened up to Rolling Stone about her initial meeting with Queen B:

I was about to meet Beyoncé, and I had a full-blown anxiety attack. Then she popped in looking gorgeous, and said, "You're amazing! When I listen to you I feel like I'm listening to God." Can you believe she said that?

Then, following the shock of meeting her God, Adele also went on to fight off rumors between the two during an interview with Beats 1 in 2015: "There is a rumor going around that I turned Beyoncé down... Just to clear up, I would never be so disrespectful. I would never disrespect her like that. I’m such a fan, oh my God!... Queen Bey to the day I die." Not to mention, Adele further clarified the rumor during an interview with Time late last year, "Whoever started that rumor must have been having a laugh, because anyone who knows me knows that my main priority in life outside of my child is Beyoncé." Seriously world, never questioned the loyalty of a Beyhive member.

Most recently, the "Chasing Pavements" singer posted an Instagram photo hugging an "Irreplaceable" poster and calling Beyoncé, "the most inspiring person I've ever had the pleasure of worshipping," resulting from the incredible release of Queen B's newest album masterpiece, Lemonade. Obviously, Adele has taken her church offering to another Beyhive level and if you didn't attend, don't worry, we have Adele's service for you to watch below:

UGH, don't you just love it when female artists who are queen enough to go by one name band together and deliver their common adoration, especially when it is also our shared religious experience?! HALLELUJAH!!