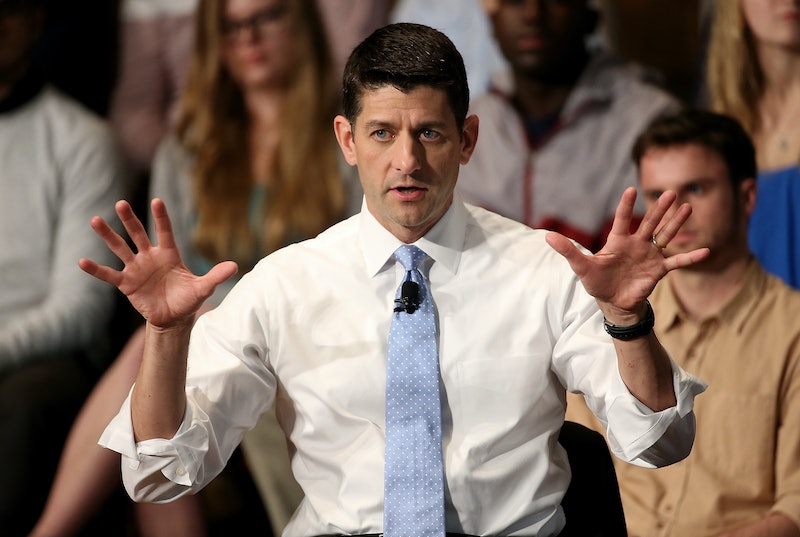 In a surprising announcement Thursday afternoon, the speaker of the House said he won't endorse Donald Trump for the Republican presidential nomination. The declaration immediately sparked whispers of a will-he won't-he run for president again, despite the fact that he's already said he will not do so, but it does raise the question of why Paul Ryan won't endorse Trump, who became the presumptive GOP nominee after thousands of primary voters chose him for the job. Although Ryan said he's just "not there right now," there's more to it than that.

In an interview with CNN's Jake Tapper, Ryan officially announced that he isn't supporting Trump at this point. He said he's willing to do so eventually, but that it's Trump who has to make the first steps toward unification of the Republican party. "And we've got a ways to go from here to there," he said. No kidding.

Ryan is doubling down on what he pushed for when he agreed to run for House speaker — unity. Back in October, Ryan wanted full support from Republicans in an attempt to bring a divided party back together again, and agreed to be the "unifying figure." Now he's calling on Trump to do the same thing — and only when (if) that happens will he support the presumptive nominee.

A number of conservative politicians have refused to support Trump. Even former Presidents George H.W. Bush and George W. Bush have said they'll stay out of the current presidential race. But Ryan is by far the most prominent current GOP politician who has expressed some serious concerns about Trump as the Republican nominee. And really, his reasoning for it is unsurprising. After Ted Cruz and John Kasich dropped out of the race, leaving a path for Trump to take the nomination, Republicans around the country said they'd vote for Hillary Clinton before ever putting a check mark next to Trump's name. That kind of fissure in the GOP will only expand if Trump continues with his hateful speech that many conservatives say doesn't represent what they're about.

"This is the party of Lincoln and Reagan and Jack Kemp," Ryan said in the interview where he declared he wouldn't — couldn't — support Donald Trump. "And we don't always nominate a Lincoln or a Reagan every four years, but we hope that our nominee aspires to be Lincoln- or Reagan-esque — that that person advances the principles of our party and appeals to a wide, vast majority of Americans."

It's clear Ryan doesn't think that Trump fits that bill, but if Trump tries hard enough to unify "all wings of the Republican Party and the conservative movement" and then acts in a way that's presidential and allows voters to be proud of their party and their candidate, perhaps he'll consider supporting him. Or perhaps not.