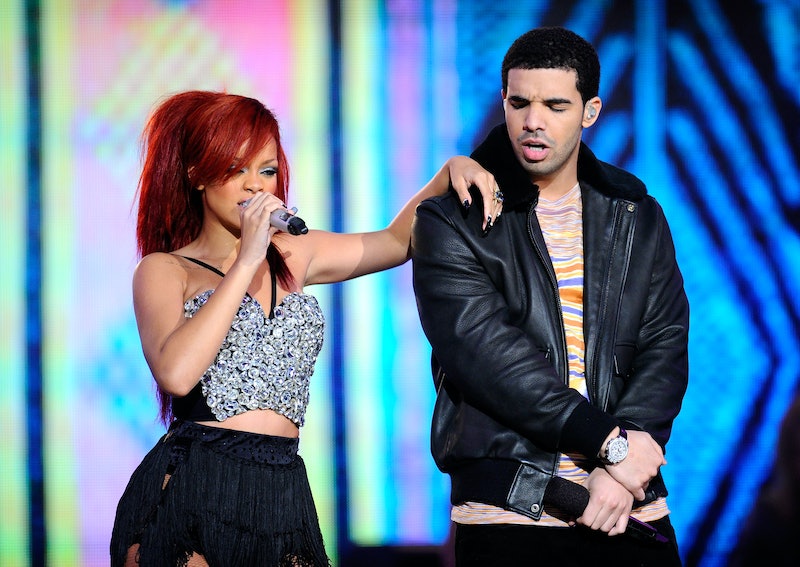 Another day, another rumor that Rihanna and Drake are dating. According to a People magazine insider, the collaborators have been "secretly dating for months" and are purposely choosing to keep their romantic relationship on the down-low "because this time around, they want to do it right and keep their relationship private." With literal years of are-they-or-are-they-not rumors embedded in their history together, is this time the real deal for Drake and Rihanna?

Let's look at the evidence: This ~secret~ RiRi/Drizzy romance was on full display at celeb hot spot The Nice Guy in Los Angeles on Wednesday night, People reports. According to eyewitnesses, the two were "dancing all night together" and were "being very affectionate." That kind of intimacy was clearly just a continuation of Rihanna's show at the Forum earlier that night, during which Drake joined her on stage for "Work" and the two danced seductively together during the number.

TBH, the dancing itself isn't so much of a tell — the two clearly have chemistry between them and often, uh, "dirty dance" on stage together:

Still: Maybe this is the moment that Drake has been waiting for. When you look at the extensive relationship rumors about the Views rapper and Rihanna in the past, it becomes overwhelmingly clear that the two were an item in Drake's eyes — but not so much in Rihanna's. Is the playing field even this time? While the only source to go on here is the People insider (which, again, is reputable), Drizzy has once again spoken out about the natural chemistry between the two.

"I think that’s what makes the records better," he told BBC1's Zane Lowe, Radio.com reports. "We’re not just forcing the story…we have genuine energy between us."

For her part, Rihanna remained as coy as ever during a February appearance on Ellen DeGeneres, saying that she is single and not looking for a serious relationship.

"I'm single right now," she told the talk show host, according to Complex. "I just think I have so much on my plate that I can't even find the time to entertain a steady relationship, or anything serious, or even a text. Right now it's just crazy."

Are those the words of someone who wants to keep her relationship under wraps — or is she speaking the truth? Once again, when it comes to these two: The world may never know.