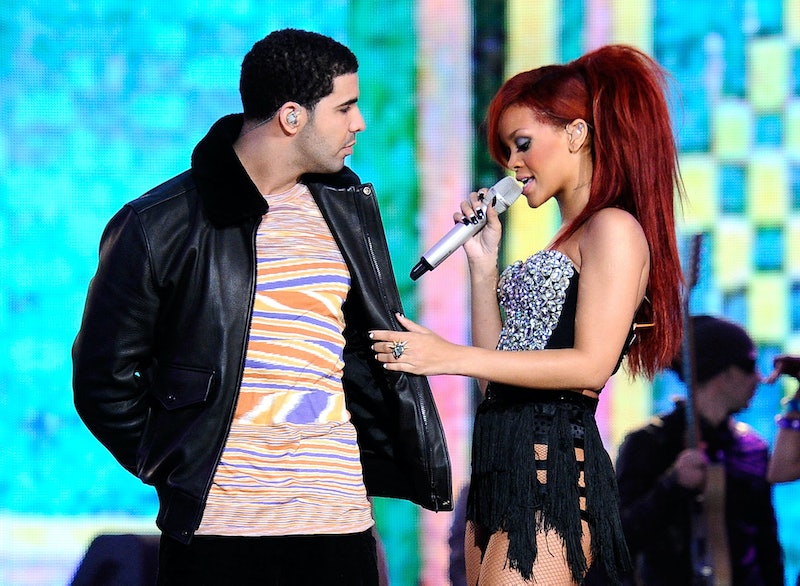 With the Wednesday release of Rihanna's highly anticipated new single "Work" (feat. Drake), all of those Rihanna/Drake relationship rumors are once again coming to light. Of course, this is far from the first time that the two possible exes put out music together — there was Drizzy's "Take Care" and RiRi's "What's My Name" — but it's also not surprising that this new collab has fans wondering, "Whatever did happen between these two over the course of the years?" I mean, sure, it's clear that the singer and rapper are good friends and frequent collaborators, but the rumors surrounding this supposed romance have always been a little hazy. Did Rihanna and Drake actually date? It turns out that it all depends on which party you ask.

Let's start from the beginning. And by "beginning" I mean a random May 2009 bowling date that set the stage for all of the gossip to come. At Lucky Strike bowling alley in NYC, just several months after Rihanna was assaulted by Chris Brown, the singer spent time with Drizzy at Lucky Strike. At the time, a Page Six source revealed that Rihanna "was drinking whiskey and apple juice and making out with [Drake] all night… They were really cute together." A year later, in May 2010, Drake dropped the track "Fireworks," which contained these telling lyrics: "Who coulda predicted Lucky Strike would have you stuck with me? / What happened between us that night, it always seems to trouble me."

Drake went on to give a little backstory about the lyrics in a profile in the New York Times a few weeks later, playing the Nice Guy card and saying he "was a pawn."

"You know what she was doing to me? She was doing exactly what I’ve done to so many women throughout my life, which is show them quality time, then disappear," he said. "I was like, wow, this feels terrible."

Now, I'm a fan of Drake, but this sounds like a lot of blame put on Rihanna for not falling for the rapper. Sure, it's rude to ghost someone, but we need to keep in mind that at the time of this alleged date, the singer had just gotten out of an abusive relationship a few months prior. It's understandable that she wouldn't have necessarily wanted to hop into something new right away, if Drake's account of the situation is to be believed.

As for Rihanna's take on the situation, she was adamant that she didn't hurt the "Hotline Bling" rapper, telling Power 105.1 in November 2010: "I would definitely say, that was wrong, he doesn’t know what he’s talking about." Musically, however, the two are a match made in heaven. She continued, "Fast forward, fast forward, we just became friends and we left it at that. We get along really well. Drake has a youthful thing about him and he is very melodic with the way he writes and I felt I needed someone like that for ‘What's My Name.'"

Drake, for his part, later clarified to Elle in 2011: "At the time it hurt, but she didn't mean to. I'll never put that on her. I was hurt because I started to slowly realize what it was. I guess I thought it was more."

"[Rihanna] the first girl with any fame that paid me any mind," he added. "You spend days reading about this person in the magazines. All of a sudden you have this number-one song and you're at some birthday party and there she is. And you're just some naive kid from Toronto staying in some sh*tty-ass hotel who got invited to this party on a whim. That's just how it happened."

Of course, it was during this time period that the two were collaborating on music — RiRi's "What's My Name" music vid featuring Drake dropped in November 2010, while Drake's steamy "Take Care" video was released in April 2012. It's clear that whatever awkward clarifications they were giving the press about their relationship were put on the back burner when it came to their professional lives and careers. That being said, it should definitely be noted that both of their respective music videos featured the artists getting cozy with each other.

Fast forward a few months later, and Drake and Brown — and their entourages — get into an all-out brawl at a club, complete with TMZ headlines, bottles being thrown, and a photo of an injured Breezy. Drake later spoke about his beef with Brown Internet radio show Keep It Thorough and took no prisoners in the process:

"His insecurities are the fact that I make better music than him, that I'm more popping than him and that at one point in life the woman that he loves fell into my lap," Drake said. "I did what a real n*gga would do and treated her with respect."

In 2013 and 2014, Drake attempted yet again to clarify his former relationship with Rihanna and once again confuse the public in the process. In 2013, he told Ellen DeGeneres that the two "had their moment" and that the singer is a "great girl." In 2014, however, he told Rolling Stone that Rihanna is the "ultimate fantasy" for him — but the two are "just friends."

"She's the ultimate fantasy. I mean, I think about it. Like, 'Man, that would be good,'" he revealed. "We have fun together, she's cool and sh*t. But we're just friends. That's my dog for life."

2014 was also the year the two toured Europe together, reigniting those romance rumors hard as the two reportedly canoodled in Paris, held hands in Manchester, and hit up clubs together in London. Though things seemed to fizzle after this, things reportedly heated up again at Coachella in 2015 when they acted "couple-y" at the music fest, whatever that means. 2015 was also the year that Rihanna told Vanity Fair that her last "official" boyfriend was Brown, with whom she briefly reconciled in 2012.

Whatever exactly happened between Rihanna and Drake, it certainly seems like it was all pretty one-sided — at least according to their respective comments to the press. While there may have been something there in the beginning — call it a hookup, call it some flirty fun, call it a relationship — it was obvious that Drake felt things for Rihanna and was hurt by the situation when she didn't feel the same. RiRi, on the other hand, has maintained that the two are friends and never once made mention that there wasn't anything more to their relationship other than friendship.

So, did Rihanna and Drake actually date? It all depends on who you ask.