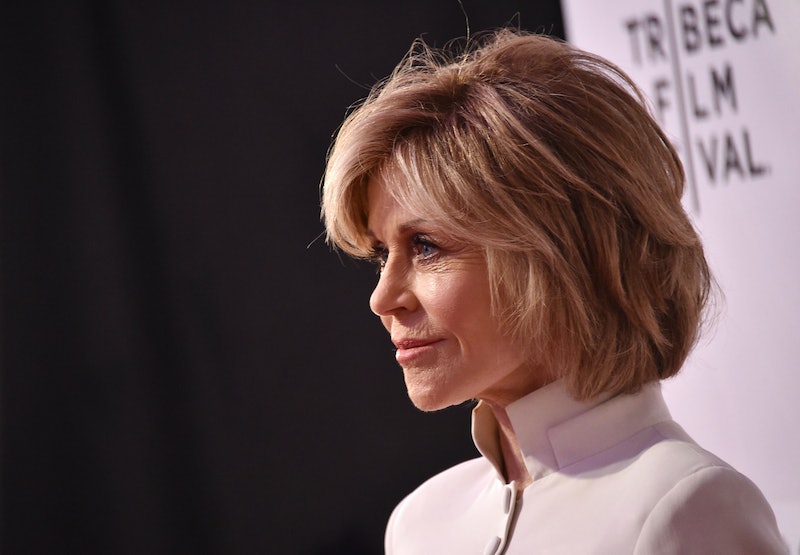 Jane Fonda—78 years old, Hollywood vet and renowned boss lady—is still figuring things out. Herself included. Last May, she joined the Netflix family alongside Lily Tomlin in the hilarious sitcom Grace and Frankie , and even though Fonda’s repertoire is never-ending, it seems the actress has learned more about herself from this project in the past year alone than most of us have… actually, ever.

In the refreshing comedy, co-created by Marta Kauffman (who also co-created a little show called Friends), Fonda plays Grace, a woman who’s forced to rethink her life and identity once her world is turned upside down after learning her husband is gay with her arch nemesis’s (Tomlin) husband. The reviews are in, and like Fonda, the show is only growing more fabulous with age.

Thankfully, she realizes this about herself. Just as I hoped (and knew) she would. Ironically though, she seems to still maintain the mindset of a Hollywood up-and-comer, hungry for work and eager to learn. At the Grace and Frankie season two premiere in Los Angeles over the weekend, Fonda tells Bustle how she’s developed as a woman and actor by explaining what she’s come to learn about herself since the start of the show last year. “I feel like I’ve grown since the first season,” she explains. “I still feel like I’m just starting out and have so much to learn.”

And she totally knows that at 78, she continues to kick butt, and the show is proof. “I still have a lot of stamina. [I learned] that learning lines is still easy for me,” she says. “When things seem to be problematic, I stick with it and overcome them. I don’t know, I feel proud of myself.”

Meanwhile, her on-screen daughter, played by Brooklyn Decker, is as taken by Fonda (and her sidekick Tomlin) as the rest of us are. "Aside from being unbelievably talented actresses — which, we all know that they are, we've all seen that for years — they fight for chicks. They are girl power, hear me roar," she raves. "They're the girls' girls, and I love that."

Like Decker, if I learn to attain and practice even a fraction of Fonda's badassery at some point in life, I'll be a happy girl.