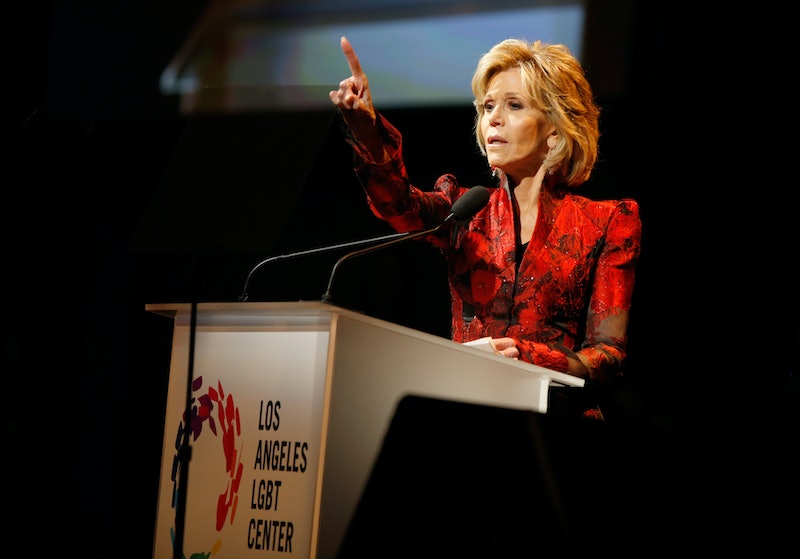 Jane Fonda is synonymous with boss. Mini debriefing of why in 3, 2… OK, she’s the winner of multiple Academy Awards, Golden Globes and a Primetime Emmy Award, just to name a few. In her late seventies, she knows and owns the reality of her figure. She isn’t afraid of aging, in fact, she embraces it and calls this time of her life the “good days.” She bounced back from breast cancer and a 2010 lumpectomy and after five decades of acting, she tackled her first starring role in a television series with Grace and Frankie. Oh, and she’s arguably the most badass feminist and activist on planet Earth.

If men in her life weren’t even a little intimidated by Fonda and all of her success and glory, there’d be a problem.

But, to no surprise, men and women alike find themselves weak at the knees in the actress’s presence — namely her exes. At the Grace and Frankie season two premiere in Los Angeles on Sunday, Fonda, 78, was forthcoming in admitting that men around her, especially her ex-husbands, have been threatened by her success throughout her life.

Looking back, Fonda tells Bustle that she found half of these men were threatened by her at one point or another. “Yeah, back in the day,” she says. “My boyfriend Richard Perry isn’t but my husbands were. Not Ted Turner, but the others.”

Fonda’s co-star Brooklyn Decker validates that men beyond Fonda’s exes are threatened by her, constantly. “Yes! They are,” she says, further admitting how Fonda’s power affects her, too. “I’m not threatened, I’m intimidated. I’m a female who plays her daughter and I’m still intimidated because she’s just that powerful. She has this incredible magnetic energy that you’re just in awe of.”

That magnetic energy certainly comes through, especially when Fonda wears the hat of the feminist pioneer. Earlier this year, the actress hosted “A Night of Comedy With Jane Fonda,” which supported the ERA Coalition and the Fund for Women’s Equality. “Growing up in the business, I have always felt it is important to use my voice and stand with my colleagues and friends to support women's rights and equality,” she said at the event.

Decker confirms how Fonda practices what she preaches:

We have a show that, our show runners are women, our writers are female, our producers are female, so to have [Fonda] come on board and advocate for women on a regular basis, which doesn’t happen often, especially in this business, is so refreshing.

She holds her own and thrives in a male-dominated workplace, and whether it be pushing for the rights of other women or her own career, it’s clear that Fonda never has, and never will, back down.

Luckily, she doesn’t feel bad (nor should she) for threatening men simply by dominating her life, fighting for what she believes in and being who she is. What’s interesting though, is the stark contrast between Fonda and her character Grace, who doesn’t hold it together quite as well as the actress does in real life. After learning her husband is leaving her for another man, we see Grace fall apart (in season two, she drinks vodka out of a watermelon, for example). When asked if men need to see women in such shambles to understand them better, Fonda responds: “Do they? I mean the obvious answer would be because men are scared of strong women, but that’s such a cliché. Some men [are], not others.”

It's clear she takes her past experiences with men with a grain of salt and an "it is what it is" attitude. Now, she keeps it moving the only way a true boss knows how: by continuing to conquer and fighting for other women to conquer, too — regardless of what any exes may think.